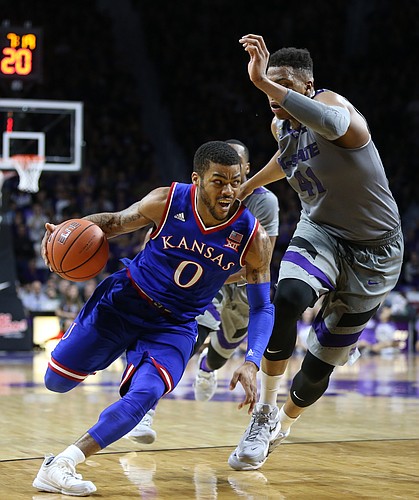 1 - Frank Mason III: Took over the game in key stretches, showing he has his zip back. Even when teammates lost their composure, he kept his and finished with 16 points, five assists, two steals and just one turnover. In a statistical oddity for the high-flying point guard, he did not have a rebound.

2 - Landen Lucas: Played just 13 minutes, but made a big impact before fouling out. During his time on the floor, Kansas outscored Kansas State by 15 points. When he watched, Kansas State outscored KU by six points. It was a physical game, which is always to Lucas’ liking. He’s the team’s best rebounder and post defender.

3 - Perry Ellis: Suffered a gash on the head that required stitches and a scratch to the eye that is cause for concern. Ellis still made an impact with 14 points, two assists and a steal in 30 minutes.

4 - Svi Mykhailiuk: Played a terrific all-around game, which just might give his confidence the boost it needed. Made 3 of 4 three-pointers, didn’t turn it over and contributed nine points, four rebounds, two assists and a steal.

5 - Wayne Selden Jr.: Drove hard to the hoop early and scored 8 of his 12 points in the first half. Didn’t have quite the same approach in the second half and took an ill-advised three when a drive was the right play. Had a good night on the boards, picking up five.

6 - Jamari Traylor: Fouled out after a productive 17 minutes that included six points, three rebounds, a blocked shot and a wild dunk that will show up early in his career highlight video.

8 - Hunter Mickelson: Had a key defection late and picked up one rebound in five minutes.

10 - Brannen Greene: Played five minutes and missed his only shot, a three. Committed two turnovers and two personal fouls. Needs to forget this one and play with confidence built in recent games.

It looks like Svi might have gained the confidence he needed and probably will be a more active contributor in future games. He definitely has the potential and with experience should play more in the future.

The kid amazes me when I am reminded that Svi is still only 18 years old.

"""4 - Svi Mykhailiuk: Played a terrific all-around game, which just might give his confidence the boost it needed. Made 3 of 4 three-pointers, didn’t turn it over and contributed nine points, four rebounds, two assists and a steal."""

His steal of the last pass on a KState breakaway may have been what broke Wildcat's final gasp of overachievement. He sees things while (before?) they happen.
Court Vision ::: Svi.-.-.-Luke may spend a little time with Jedi Yoda now and then.

Does it not count as a TO when Diallo forgets to step completely out of bounds before inbounding the ball to a teammate?

If I remember right, they quickly re-did that inbounds play.

i can't comment enough about how bad Bragg looked, specially in the first half. it seemed like for 5 straight possessions he either turned it over, took an awful looking shot, or got beat on defense. Not to mention putting twelve stitches in Perry. He just looked completely lost in this game.

It was frightening how bad he looked last night. I always thought of Bragg as a fairly smart player but vs KSU his court awareness was zilch.

Suzy I think this team drives most of us to distraction. It seems like we had the same thought when Bragg had Cheick mix on the brain.

Brannen and Svi play at the same level, high or low, because of focus issues. Distractions for both affect them and it impacts their game. Both have enough game to make us want more of it.

Brannen was affected by the hype yesterday? You bet. He was afraid of screwing up and he lost his stroke which I am naming "freebird" on a temporary basis I would bet. Our bird flies in his hands.

Svi brought a rep into the KSU game. Not as good a shooter as advertized. Good idea to remember he hit 48 in a row practicing. This is mythical also which again ties into our bird thingy. Svi has been spotty when delivering, "the hammer" the falcon hawk strike from above. Was it not nice to see Frank say "thanks hammer, let's take this to the next level and see what happens." No storming allowed!

Svi had been showing us what separates him from Brannen and that is being effective when the shot is not falling. Now we see how exciting and positive a complete Svi can be to our future and I mean this year.

Team victory. Can we say DeVonte came through at the end, again? Wayne with tough put backs were big time. Next years team can be scary good?

The team picked up DeVonte and that's okay.

Selden still has to 'man up'. I know he's had a couple of brilliant games, but mostly he disappears when the team needs him. I don't expect 30 and 10 but a consistent scoring effort and some assists/rebounds would be an improvement. He has the physical capability and the experience. Not always the effort, which is what gets my goat. C'mon Wayne, get with it!

Really happy Svi had a good performance versus KSU. He has improved every time defensively and is learning how to contribute in ways not volumes of treys, has good passing skills. Hope he gets on a roll the last few games. Grateful for Devonte's poise and free throws at the end. The guys have to stop the stupid turnovers like Bragg did and hit more free throws. Jamari's dunk was on ESPN's best dunks of the day, deservedly so.

Svi did look good but I don't think Svi has a confidence problem he can play at this level im sure of that.....Its more of does Coach Self have confidence in Svi.. Coach Self has a quick hook when you make mistakes and you will buried at the end of the bench. There were I believe 3 games in a row when Svi didn't play.....that can destroy anyones confidence but when called upon Svi gives effort .He is still a good player and will have his moments as he did yesterday

I agree with this tremendously! Svi has not had enough slack from Self to get into a rhythm in very many games. He gets yanked after a single miss and has not been able to grasp the speed of the game. That being said, he is a MUCH better option than Greene as an overall player. He plays great on ball defense. Even though he lacks overly great team D, he is still way better than Greene at both. Greene is clearly the better shooter but the second Greene puts the ball on the ground it looks like a hot potato and he doesn't know what to do with it. Svi has great vision on offense. He can put the ball on ghe ground and find the open man. He had two great feeds to Lucas rewarding the big man for his work on the boards. Greene does "attack the boards" so his rebound numbers are higher. Problem is he only attacks the boards when nobody else is around (RE: defensive free throws, end of game). Did anybody else notice how he tried to rip the final rebound away from his teammate at the end of the game? That's the kind of stuff he does to boost his rebound numbers.

They both have upsides, but to me Svi is a better option as the first wing man off the bench. If the team is struggling offensively though, and you wanna run a quick fade for a guy, then put in Greene cause damn his shot is pretty.

There were some who felt that after " THE DUNK " that Greene should have been run out of town .....but we are better with him than without him. A player must realize his role on the team that's the coaches decision Greene and Svi are needed more so for their offense and if they make a defensive play every now and then that's a bonus,. You hit open shots and don't make turnovers as well as play tough defense you play for Coach Self. Just that simple. Svi had a good game against K-State but Greene wasn't a factor 0/1 Greene had a good game against Oklahoma State and Svi wasn't a factor . Wouldn't be great if they both had a great game at the same time.