The Kansas men’s basketball program on Monday released all but three games of its rebuilt 2020-21 schedule, 18 of them being conference clashes which will begin in mid-December.

The release of the majority of the 2020-21 schedule came just a few hours after ESPN announced that it was no longer pursuing the idea of hosting several of its early-season events in Orlando.

The Monday news release said that KU was still pursuing three other nonconference games and that details of those games would be released when finalized. 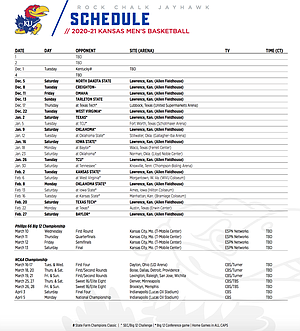 Kansas then will open Big 12 play on Dec. 17 at Texas Tech in Lubbock, Texas, before hosting West Virginia on Dec. 22 at Allen Fieldhouse.

The Jayhawks then will be off until they play host to Texas on Jan. 2. The KU men’s schedule includes three dates on ESPN’s Big Monday — Jan. 18 at Baylor, Feb. 8 vs. Oklahoma State and Feb. 22 at Texas.

Game times and television assignments have not yet been released.

In an email letter sent out to donors, KU Athletic Director Jeff Long also announced Monday that KU is planning for a capacity crowd of approximately 1,500 at men’s games at Allen Fieldhouse this season.

The letter notes that about 850 of those tickets will be reserved for Williams Education Fund donors, with students, player guests, coaches families, KU faculty and staff and visiting team fans accounting for the rest.

Because of the limited capacity, all game day parking lots will be free of charge on a first-come, first-served basis.

At the end of the season, per the previously announced Ticket Assurance Plan, season ticket holders will have three options for all remaining balances — to donate it to the Jayhawk Relief Fund, to apply it as a credit toward the 2021-22 season or to request a prorated refund.

“While this is not what any of us had hoped for this season, it is imperative that we implement these changes for everyone’s safety as well as the safety of our student-athletes,” Long wrote in the email.

Asked about the earlier-than-usual start to conference play, KU coach Bill Self recently told the Journal-World he thought it was “too early” while adding that he understood why it had to be that way.

“I think in this particular year the reasoning is very good,” Self said. “To allow us a week, prior to the start of the conference tournament (March 10-13 in Kansas City, Mo.) where teams can get healthy or play make-up games. On the surface, no I don’t like it. But I think it’s a smart move by the league.”

It remains to be seen how the Jayhawks will fill the remaining portion of their nonconference schedule, which includes a Jan. 30 trip to Tennessee in the SEC/Big 12 Challenge, but at least a portion of it likely will take place before the Champions Classic game with Kentucky.

Earlier this year, the NCAA announced Nov. 25 as the official start date for the college basketball season, and, prior to ESPN canceling its Orlando plans, KU was slated to open on that date in Orlando at the Wooden Legacy event.

*3 games still to be added

Yeah, you're right, Bee Bee. Much better to have a capacity crowd with a raging pandemic going. Do you wear a seat belt, Bee Bee? Do you use a fire alarm or a burglar alarm? Do you look both ways before crossing the street? If you do those things, does that make you a nervous nellie?

Thank God the powers that be aren't as stupid as you clearly are.

How on earth did Gillispie end up at a place that no one has heard of?

And before that, Ranger College. A school even fewer people have heard of.

I'm sure his abuse of players and coaches has something to do with it.

My oh My you must be a Liberal Democrat. "Raging Pandemic?" This is all going to be over after the election. Then we can all get on with our lives. STOP living in fear and get outside and enjoy the colors of fall in Lawrence. It is very beautiful this time of year.

It is Ridiculous "The powers that be" have the same jaded view as you.

Not saying you’re wrong but if our response to Covid-19 is a product of our election, how do you explain why the rest of the world is taking it seriously when they are not in election cycles? And why does Dr. Fauci, who has appeared at so many press conferences with the president, continue to advise us to take precautions that contract the president?

Since Bret is clearly a Trump cultist, he will obviously respond that we shouldn't listen to Fauci because he's a disaster and an idiot. After all, it's not like these people ever think for themselves; they just parrot what Faux News and their Dear Leader say.