Kansas guard Devonte' Graham (4) gets around Missouri guard C.J. Roberts (0) during the first half of the Showdown for Relief exhibition, Sunday, Oct. 22, 2017 at Sprint Center in Kansas City, Missouri.

A rivalry dating back to 1907 made its unofficial return Sunday afternoon, as the Kansas and Missouri basketball programs squared off in a charity exhibition to raise money for relief organizations.

Though the stats and result won’t go in either team’s record books and the point of the scrimmage was to raise money for a good cause, it didn’t take long for the Jayhawks and Tigers — and a split-down-the-middle sellout crowd — to make it feel more like March than October at Sprint Center.

With senior guard Devonte’ Graham leading the way, the Jayhawks made sure KU fans spilled out of the downtown arena elated, after a 93-87 Kansas victory.

Graham’s 17 first-half points set the tone for the Jayhawks in the charity basketball affair and he finished with 25 points, 10 rebounds and five assists, while making seven of 15 shots.

KU and Mizzou hadn’t squared off on a basketball court since the Tigers left the Big 12 for the SEC in 2012, but the players delivered enough effort and highlights to allow the fans from both schools to easily slip back into their roles as bitter nemeses. 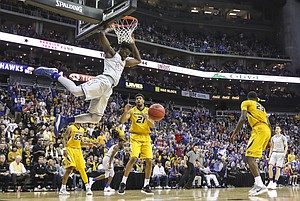 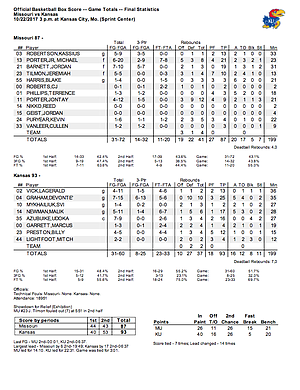 • The game turned when: The Jayhawks embraced an assertive offensive mentality in the second half. After a Kevin Puryear 3-pointer gave Mizzou a two-point advantage, at 59-57, the Jayhawks quickly tied it back up by getting the ball to sophomore big man Udoka Azubuike (16 points) in the paint for a layup.

The next trip down the floor, Malik Newman (17 points, five assists) buried a 3-pointer, and from there, KU steadily built its lead to 17 over the next six-plus minutes.

The barrage included a pretty jumper in the paint by freshman Billy Preston (12 points, four rebounds), a would-be Newman 3-pointer that toed the arc, a string of three straight baskets inside by Azubuike, a Graham 3-pointer, a Marcus Garrett tip-in on the offensive glass and an alley-oop finish by Lagerald Vick (13 points).

• Offensive highlight: Vick’s freakish speed and leaping ability were both on display on one backdoor cut in the second half.

Lurking in the right corner, in front of KU’s bench, the junior wing sold his defender on the idea of loitering on the perimeter.

But the moment Vick caught him looking the other way he blazed down the baseline while looking the way of Graham.

One easy lob pass to the rim later, Vick threw it down, building KU’s lead to 83-66.

• Defensive highlight: With Kansas trailing its rivals from Missouri late in the first half, backup big man Mitch Lightfoot came through with a string of plays by hustling on the defensive end of the floor.

First, Lightfoot, trailing the play, tracked down Blake Harris from behind to swat away a potential easy layup.

On the next Mizzou possession, Lightfoot slid his feet in the paint while anticipating a Kassius Robertson drive and drew a charge.

A half-minute later, Lightfoot was at it again, blocking the shot of Jontay Porter.

A 6-foot-8 sophomore who grew up as a KU fan watching Border War games, Lightfoot gave the Jayhawks a needed spark, and Mizzou only made one of its final 11 shot attempts of the first half, leaving the Tigers with a 42.4-percent success rate on its shot attempts before intermission.

• Key stat: Points in the paint. Kansas made a point to get touches in the key, whether those came on drives by guards or post feeds to Azubuike.

By the end of the 40-minute show, KU registered 40 points in the paint and Mizzou totaled just 21.

• Up next: The Jayhawks will be back in Allen Fieldhouse for their originally scheduled exhibition opener, on Halloween night against Pittsburg State.

Watched on Periscope. Fun game and MU will be good. MU fans were pricks as usual with their taunts of FBI and beatings n rapes by KU players.. Oh and the 21 yds of offense by KU Football team. But the win shut them up and that along with $2 million for Hurricane relief is all that matters. RCJH!

We need the border war back end of story.

We need it when Bill says we need it. End of story.

Thank you for clarifying that. Go directly to see AD Zenger and inform him that you represent Jayhawk nation. End of story.

first impression thoughts on game......azuibuike really needs to work on his rebounding skills....as well as free throws. graham and malik will be a fantastic 1-2 punch. Preston will get better and better as the season goes on. Svi should have stayed over the summer and worked out with the team and with Hudy to become stronger and more athletic. you couldn't even tell he was in the game today. My guess on Vick is that he will have some amazing games and some average games this season. Marcus Garrett will get a decent amount of playing time because he does all the intangibles. Mitch still needs to get stronger and would be a good redshirt candidate next year, because i see Azuibuike coming back, although everyone seems to think that he is gone after this year. He is not on any of the mock drafts for next year. He was in the 40's in the high school rankings. He really doesn't have very many basketball skills yet. He's just really big. But everyone is really big and strong in the NBA and teams are going more towards small ball with mobile, athletic, stretch centers. So he will need some more basketball skills before heading to the nba. also, my personal opinion is that he is an average rebounder at this point, so there are quite few things he needs to work on before heading to the nba. Hopefully he surprises me and has an amazing year and takes off ..... So, if he returns another year, we will finally be 'loaded' with bigs for a change. Soooooo glad Graham decided to come back for his senior year....should be another great year to be a jayhawk...sidenote...don't schedule missouri again......good for charity, but screw them

Needed this game to take my mind off the debacle thrust upon on us by Zenger's football hires. Here's hoping for a press conference tomorrow morning

Graham should never be the leading rebounder in any game...10 boards show a glaring need with the bigs to be more assertive on the glass. Would have been nice if Graham played that way against Oregon.....but his leadership is a plus .....overall it was great to get a taste of this years team .

10 boards show that Graham can read the angles off of missed shots. Look how many rebounds Mason pulled down last season. The more we go with 4 guards, the more rebounds our guards will have the opportunity to grab. Newman was 2nd with six.

Up until today, I saw no value in scheduling Misuse. But after a scintillating game and victory like today, I'm with Brent Held. Let's bring it back. It's been on hiatus long enough.