Kansas forward Landen Lucas (33) grabs a rebound and is fouled with seconds remaining during the second half, Saturday, Feb. 18, 2017 at Ferrell Center in Waco, Texas. Lucas hit both free throws to give the Jayhawks the lead.

Waco, Texas — Most of the 10,021 in Ferrell Center whistled, waved, hollered and did whatever else they thought might influence Landen Lucas to miss at the free-throw line with the game tied and 11.5 seconds showing on the clock.

To that point, Lucas had missed his only other two free-throw attempts, was coming off a pair of games in which he combined to make 1-of-4 in the final minute and was shooting just 50 percent from the line in Big 12 play.

Yet, it never occurred to me that he would do anything but make both of them, and then at the other end play a role in keeping Baylor from forcing overtime.

I suppose that confidence stemmed from the general vibe when Lucas is on the floor is that good things are about to happen for Kansas and when he’s not, the other team will go to town. 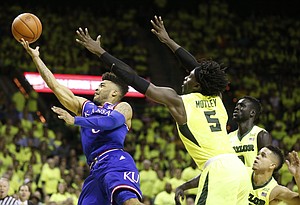 So it goes for a Kansas team so atypical in that it’s devoid of front-court depth and so reliant on the fifth-year senior’s brains and brawn.

He swished them both and Baylor called 30-second timeout with eight seconds remaining with a chance to tie it or win it with a 3-pointer.

“They ran the same out of bounds play against (Kansas State) toward the end of the game, so we were pretty prepared for it,” Lucas said. “We had seen it before. They got it over the top against K-State and we just had to make sure they didn’t get that over the top.”

Lucas explained how he took that option away.

“Show that you’re there. Show that you’re alert,” Lucas said. “If they’re feeling uncomfortable about it, they’re not going to force it. If they had tried it, I think we would have gotten a hand on it. Really, we were just in the right position, pretty ready for it, and then once we took that initial lob away, the guards did a great job of guarding out top.”

“We’re a veteran team,” Lucas said. “We know how to fly around at the end of the game. Really, there aren’t a ton of principles. We just kind of make sure they don’t get an easy shot. We just help each other out. We just do whatever we can to make sure it’s a tough shot, and it worked out again.”

This team forever lives on the edge and so seldom falls.

The escape from Waco came one week after a one-point victory against Texas Tech in Lubbock, which came two days before an overtime triumph in Allen Fieldhouse against West Virginia in a game Kansas trailed by 14 with inside of three minutes remaining.

Lucas said that during Saturday’s halftime talk, Kansas coach Bill Self referenced the time that it took to erase that 14-point deficit and followed it with, “We’re down six with a whole half left. Don’t panic. We’re good.”

Self also didn't see any reason to panic when Lucas, who had been struggling from the line, was there with 11.5 left after pulling down the offensive rebound on Devonte Graham's missed jumper.

"I was actually very confident," Self said. "I thought he'd make them and I think he was confident too."

Lucas stayed in uniform and in the building for a couple of hours after the West Virginia game to sharpen his free-throw touch.

“I was there until about 1:30 in the morning,” Lucas said. “I couldn’t really sleep after that, so I just figured I’d stay until I hit a couple hundred (free throws).”

After the exhausting West Virginia game and before extending his night with a lengthy free-throw session, Lucas sent out a Tweet assuring Kansas basketball fans, “Don’t worry y’all I’m about to get in the gym and shoot some free throws”.

The only worry Lucas spread Saturday came every time when he was whistled for a foul. Ditto for Jackson. Foul trouble limited Lucas to 31 minutes, Jackson to 32.

During the 31 minutes with Lucas on the floor, KU outscored Baylor by 10 points. During his nine minutes on the bench, the Bears had an eight-point advantage.

"I'll tell you this," Self said, "if he hadn't had four fouls I probably would have played him 38 minutes, 37 minutes."

If that were the case, the game might have been decided with a whole minute left, instead of in the final possession, which would have made it dreadfully dull by recent Kansas standards. 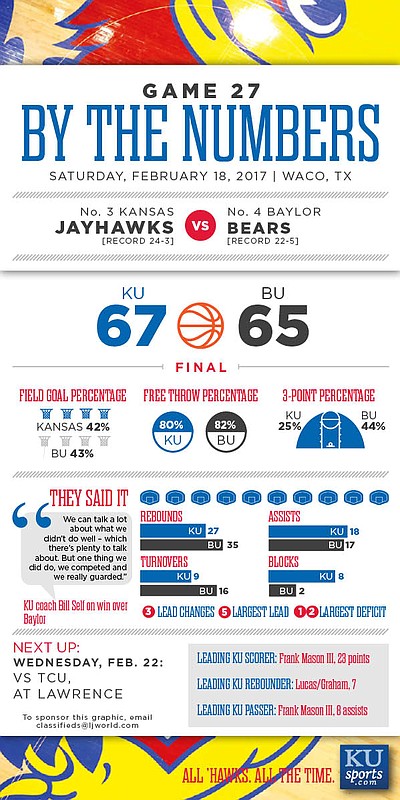 Landen, nothing but respect for you. You were a man out there today.

You have to flag this knucklehead when you see this. This person posts in 5-7 recent articles in order of publishing, I just go through and flag each one.

This has been an incredible season. I can't remember any other season where almost every league victory was won by such a small margin - if my math is correct the average margin of victory in 12 games is only 5.17 points. If you include the two losses, out of 14 games played, we've out scored the average opponent by only 3.07 ppg!). I would bet if someone calculated the average margin of victory for the past 13 years, this one would be the slimmest by a fair amount. Are we that lucky, good, or both? Time will tell. Congratulations on virtually wrapping up another league title. Lucky 13. Amazing!

Tom - what is the situation with his heavily wrapped thumb/hand? I can't help believe that is the issue with so many fumbled passes and knockaways? Just curious if that will mend by tourney time so he is in prime form.

I was worried some about all these close games, I thought we are just not putting teams away. Then I heard while watching another Big 12 game yesterday, that 73% of all the Big 12 games has been seceded by Single digits. - -Makes you realize that, THIS LEAGUE is just tough, there are just not any teams with many double digit conference wins. Every night is a war. The only difference is and a huge part of the reason that we are about to win the conference championship again for the 13th straight year - - -we ARE winning these close games, the difference between contender & pretender. Every team in the league other then WV has had at least 9 single digit decisions whether it's a win or a loss and West Virginia has 8 so lots & lots of close contests, Can't help but believe all these close games can't do anything but be a positive for us come NCAA time we have been through these wars ALL YEAR, only one word for this team TOUGH, this team just does not quite, it seems they never panic, never say die, mental toughness love these guys

All these close games--hard on the heart and I have to check my blood pressure every day---lol.

Gotta give credits to our Big, Lucas, not only during the crunch time, but the whole time during the game. He's solid defensively, rim protector (especially solid straight hands up vs Motley) and grabbing O-rebounds; which you all know, vs BU is not an easy one. Not sure how many of those were his.

I started to see we're clicking together in passing inside, pick-n-rolling to Lucas. He was able to grab the ball and was able to finish. But yeah, he still needs to go up stronger... :) It's all nothing but good progress. Very very good, indeed. As for Bragg.. There's still time to practice rebounding every night, buddy.. Well done, Lucas!!!

In watching Lucas the past three years I think I can tell which of his free shots are going to go in and which ones aren't. Lucas is 6'10 which makes him nearly tall enough to reach out the necessary 10' for him to shoot a flat shot and when he shoots like that and just clears the lip of the rim he seldom misses. Now when he puts any kind of arch on the shot his chances of contacting the rim see good to excellent. I have noticed this before this year and those two at BU the other day were the flat ones that just go in for him.