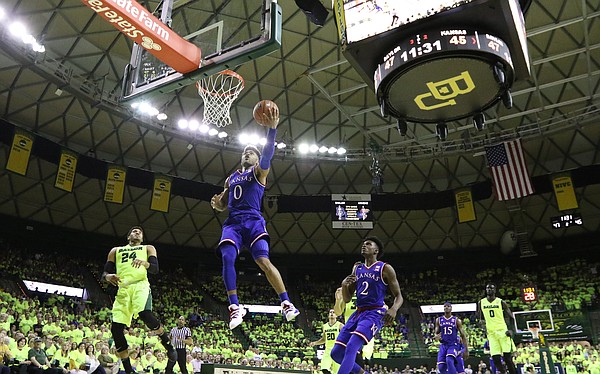 Kansas guard Frank Mason III (0) swoops in for a bucket late during the second half, Saturday, Feb. 18, 2017 at Ferrell Center in Waco, Texas. by Nick Krug

1 - Frank Mason: Put multiple lobs right on target for Josh Jackson, went 8 for 8 from the line, had two steals, eight assists, one turnover and a game-high 23 points. His and-one reverse layup was the play of the game.
2 - Josh Jackson: Deflected multiple passes and made himself disruptive to the Bears' chances of winning in so many ways, making winning plays usually reserved for guards and others that only big men make. His versatility was on display right through the final possession, when he left his man, a 7-footer, to double a 5-11 point guard. Jackson's statistics (16 points, one rebound, two assists, four blocked shots) don't begin to tell the story of the influence he had on the victory.
3 - Landen Lucas: Won the game with an offensive rebound and two free throws with 11.5 seconds left and kept Baylor from running the play it wanted to run to force overtime. Limited to 31 minutes by foul trouble, Lucas totaled eight points, seven rebounds (six offensive) and three blocked shots. Kansas outscored Baylor by 10 points when Lucas was in the game and Baylor had an eight-point advantage when Lucas sat.
4 - Lagerald Vick: Stormed off the bench to contribute eight points and six minutes, played under control and with strong defensive energy.
5 - Devonte' Graham: Made just 1 of 12 shots and 1 of 9 from 3-point range, ending a streak of eight consecutive games with mutliple 3-pointers. Had four assists, one turnover and played strong defense.
6 - Svi Mykhailiuk: Not his day, Svi made 1 of 6 shots and 1 of 5 3-pointers and had two turnovers..
7 - Carlton Bragg: Mason set him up beautifully for an uncontested dunk, but other than that Bragg wasn't able to do anything to merit more than five minutes of playing time. Committed two fouls and did not pick up a rebound or lend much strength defensively.
8 - Mitch Lightfoot: Played four minutes and blocked a shot.

These six (some games, 7 or 8) have played together so well on offense all season, are now putting together some defense(s) that keep games against top-rated teams within reach – and their 'reach' in crunch time can be awesome to witness.

Wishes from heaven: - Stronger focus from Carlton in longer stretches; - More 'unsung hero' moments from Mitch and fewer 'Memphis' fouls by Coleby; - Better anticipation by Svi on defense to compensate for the half-step he lacks in quickness;

KU fans should go online and vote for Frank Mason III for the Player of the Yea award.. The site is : seniorclassaward.com. Frank deserves the support

You can vote once each day. I have 3 computers so I can vote 3 times each day. Lets do this for Frank

I'm starting to wonder if Bragg is ever going to turn his season around.

The rise of Lucas has been a very welcome development. Looking like the Sr. Big we need for a good tourney run. Standing O for Landen.

Watching those successful lobs and bounce passes from Mason is just great. I really hope he keeps doing that. 8-10 assists every game from now on. He can still be a scoring threat, a lethal one while facilitating offense to others. It will work out just fine. We didn't shoot 3s well, but still won against NC contenders, we must be doing right. Our pressure D starts to look great with lots of active hands and boy, Lucas is a Great Wall of Phog!! I smell a NC trophy already..