Tom Keegan: Mykhailiuk’s game-winning three could lift him out of mini-slump

Kansas guard Sviatoslav Mykhailiuk (10) puts up a three from the corner over Nebraska forward Isaac Copeland (14) to give the Jayhawks a one point lead with seconds remaining in the game, Saturday, Dec. 16, 2017 at Pinnacle Bank Arena in Lincoln, Nebraska.

Lincoln, Neb. — The basketball was in the air for a brief eternity, a moment that makes basketball fans age a year per second. Wide-open Kansas senior Svi Mykhailiuk, mired in a mini shooting slump, had launched it from deep in the left corner, right in front of the visitors’ bench at Pinnacle Bank Arena. Devonte’ Graham had set him up with a well-timed pass.

These are the stressful moments in games that produce a high for one side, a low for another. The shot goes in, the fans in red turn blue. It clanks out and the fans in blue turn red with anger.

It swished through the hoop with 23.2 seconds left. Kansas stopped Nebraska from scoring at the other end and won the game, 73-72.

Afterward, Graham sounded as if the moment didn’t make him nervous in the slightest. He shared what was on his mind as the shot floated.

“Cash,” Graham said. “It’s got to go in. He couldn’t hit one all day. I could just tell. I’ve been around him a long time and I’ve seen him shoot a lot of shots. I could tell when he released it, it was going in.” 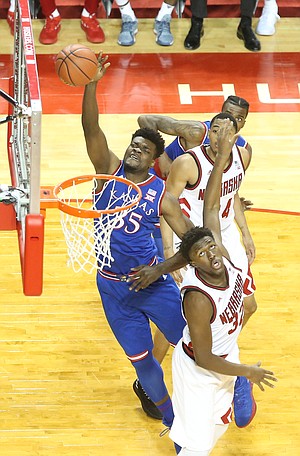 The shot and Udoka Azubuike capping his career night with a blocked shot at the other end kept Kansas from encountering its first three-game losing streak since the 2012-13 season.

“I’m just thankful for the coach trusting me to shoot the shot,” Mykhailiuk said.

He’s too skilled a shooter to stop believing that he’s going to make an open 3-pointer and it doesn’t hurt to hear constant reminders.

“My teammates, they all tell me to keep shooting through the whole game when I kept missing shots,” said Mykhailiuk, who made 6 of 16 shots. “They said, ‘Keep shooting. Believe in yourself. We know you’re going to make it.’”

On a night when Malik Newman and Marcus Garrett went scoreless in a combined 47 minutes on 0-for-10 shooting, Svi wasn’t much better until awakening for 10 of his 14 points in the final 9:56. He took a charge with 10:09 left, then drove the right baseline and dunked at the other end, putting himself on the way to a strong finish.

The mini-slump from long distance hasn’t crawled into Svi’s head to cause him to hesitate. It hasn’t even come up in conversation, according to Graham.

“We never really talk about shooting slumps like that,” Graham said. “That’s just what shooters go through. Shooters shoot. That’s what we always say, shooters shoot, so we’re going to just keep shooting. We always shoot after practice. You’re going to go through little ups and downs shooting the ball. We just want to stay aggressive.”

“That’s what he’s supposed to do. He and Malik are supposed to be able to shoot the ball in the basket,” Self said. “That’s as big a job as they have for us. That was great to see. You don’t have to make shots to play well, but in this particular situation he had to make a shot for us to win and he did it.”

Said Svi: “I was praying it was going to go in. It was a great execution of the play we wrote.”

And he cashed in on the great execution. 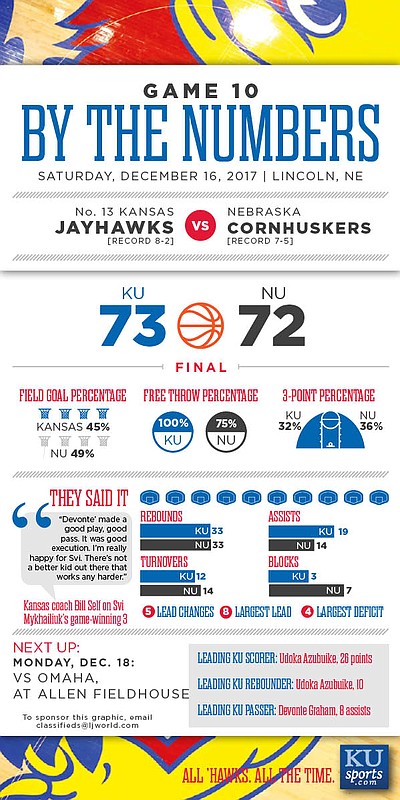 We had two players put in 47 minutes and did not scratch? If Preston becomes eligible, how long do you think it will take Self to use two bigs!

About 30 seconds! We are supposed to be loaded with shooters, but many of them have disappeared these last three games. And no one can drive to the hoop like Frank did last year.

Malik Newman thinks he can, but he always gets his shot swatted away.

Malik's driving problem is that he doesn't know how to get the defense to foul him the way Frank did. As a sophomore, Frank was getting swatting every time he drove. Then he learn how to get fouled and the defense backed off and he scored more.

It will be interesting to see if Preston will play like a big. He never has. He likes to pretend that he is an NBA-ready small forward.

I forgot to record game. Any ideas an how to see it?

Just got it off YouTube, so it should still be available. Good luck.

Coach keeps telling them to drive and get fouls. Maybe he's just doing what he's supposed to do.

William, it should be posted on YouTube within the next couple if days. That's how I've seen every game this year, thanks to some faithful fan out there. :-)

Matter of fact, it's already loaded and ready for viewing. Kansas Nebraska 2017

I really hope we can ditch this 3 ball offense soon. fools gold as coach says and when we have Newman, Garret and Svi shooting like they did last night, well, its anyones game. Take Dok's high percentage dunks out of our shooting and we probably would have been under 40%. Amazing we even won.

Excellent point, Mike. Malik has to learn what Frank eventually learned - - you have to drive around and out maneuver the defense rather than drive through the defense. Not only do you avoid getting your shot blocked, but you also increase the odds significantly that you will get fouled.

Frank became a master of that in his junior and senior years, which obviously served him quite well in college and now the pros.

Similarly, if you watched the OU-WSU game yesterday afternoon, you saw Trae Young in action for OU. They upset Wichita State, and Young showed why he is the best talent in the league, even as a freshman. Fortunately for KU, he will be a "one and done" at OU.

How is it that the other teams seem to have guards that can drive to the hoop and our guys just get blocked? Are we practicing wrong? I thought our guards were the strong part of our team.

Coach Self had a quick hook yesterday . As is his custom he leaves in players who aren't helping the team ....Why? Because he trust them. Newman hasn't been the player that we witnessed in Italy .He is regressing much like Seldon did .from touted as being a one and done to being an average ball player with a flash of potential . And where does Sam fit in the rotation.He played 2 minutes .......2 .........Garrett although active on defense wasn't shooting well Newman wasn't shooting well......Coach complains about not having players but you don't play Sam.......He transferred waited and practiced and was ready for primetime ......Only to sit on the sidelines 38 minutes We have an extra body that can play ......but you don't play him.You learn more about your players in a close game more than you do in 30 point blowout.We play Omaha at AFH on Monday we will find out more about Sam then.

Do you guys really think Preston is ever going to wear a KU uniform in game action???

I'm just curious because I'm beginning to feel like who was available for Nebraska is what we are going to have for the rest of the season.

You may be right but I sure as hell hope you're not, because if you are right, this team would be lucky to make the Sweet 16.

Lenny, I would love to be proved wrong...but i'm afraid I may not be.

Awards to Keegan for his prophetic prediction on Svi.