Azubuike tops ratings with career night in victory at Nebraska 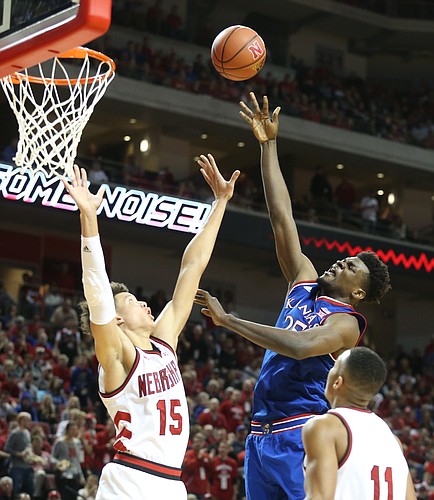 1 - Udoka Azubuike: Bill Self made him the focal point of practice all week, rode him hard, urged teammates to get him the ball and, presto, the sophomore center from Nigeria responded with a career night. He totaled 26 points and 10 rebounds and had the game-saving blocked shot. Five of his boards came on the offensive end.

2 - Devonte’ Graham: Made 4 of 7 3-point shots and the rest of the team shot 3 of 15 from long distance. Did a nice job of feeding Azubuike, threw a high-velocity lob to Lagerald Vick for one of his eight assists. Scored 18 points.

3 - Lagerald Vick: Played the sort of alert defense Self wants out of him, delivering on-time help and using his quickness and long reach to disrupt the Cornhuskers with three steals and a blocked shot. Also had nine points, five rebounds and three assists.

4 - Svi Mykhailiuk: Shook a rough first half and scored 10 of his 14 points in the final 9:56, including the game-winning 3-point shot from deep in the left corner with 23.2 seconds left. Went on his scoring spurt right after taking a charge.

6 - Marcus Garrett: Played 16 scoreless minutes and had there rebounds and two steals. Has played 79 minutes in the past five games and has scored two points, shooting 1 of 10 from the field and 0 of 6 from 3-point range.

7 - Malik Newman: Coming off a concussion, Newman was scoreless in 31 minutes, Newman went 0 for 6 from the field, 0 for 3 from 3 and had six rebounds and a steal.

8 - Sam Cunliffe: Played two minutes in the first half and never came back in.

Garrett and Newman both have got to start finding a way to contribute. They both look lost. I cringe when they catch the ball on offense. And when Graham gets a breather and Newman is running the point I hurt. I think they have the talent but both need to find a way to get involved and checked in to the game, likely contributing on defense or in transition to get the ball rolling.

Yes, Arthur. I totally agree. The thing is Graham, Vick and Svi are all finding ways to contribute without their A game. Newman is trying to hard to make his own offense. He above all is hurt when we can't run. He needs to make short jump shots, which with his speed are available to him. Garrett also perhaps short jumpers. Let's be honest, right now he is not a great shooter. Cunliffe is gong to gradually get more of the bench time.