Manhattan — Jaylen Brown, a 6-foot-7 senior forward from Wheeler High in Marietta, Georgia, has been concentrating on his high school season more than recruiting.

“The schools I’ve heard the most lately are Kentucky, North Carolina, Georgia and Kansas. I say that and he’ll probably end up picking UCLA,” writes Dan McDonald of Rivals.com. “I truly believe the kid doesn’t know where he’s going yet, so it’s hard to peg this one right now.”

Brown, who also is considering Georgia Tech and Michigan, is expected to make a decision in mid- to late April. 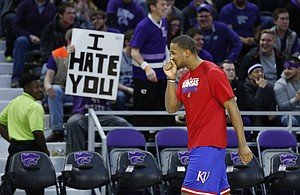 Images from Monday night's game between the Jayhawks and Wildcats at Bramlage Coliseum.

Bill Self on the Sunflower Showdown & K-State's court-storming

“The three most consistent programs that I’ve heard mentioned are Kansas, Kentucky and UCLA (that's alphabetical folks ),” writes Eric Bossi of Rivals.com. “But most on the recruiting trail tend to think he’s going to be kind of like (Andrew) Wiggins in that he’ll take his time, not seem all that serious about it and then just make a pick and not be afraid of surprising people with his pick.”

Brown, who is projected to be the No. 1 player taken in the 2016 NBA Draft (by Draftexpress.com) scored 34 points and grabbed 17 rebounds in an 87-68 state playoff win over Douglas on Saturday. Zagsblog.com reports that UNC coach Roy Williams attended the game.

Maker update: Thon Maker, a 7-foot center from Orangeville Prep in Mono, Ontario, who is ranked No. 5 in the Class of 2015 by Rivals.com, spoke about KU and Kentucky to pickandroll.com.

“I (visited KU) in the summer. I got to watch some tape of the (Morris) twins. I also got to see their weight room facility and how they work. They have a pretty good setup, also (along with Kentucky). That was a good visit. I also sat down with coach Self and that was a great conversation that we had, that was a comfortable visit, also.

“I visited Kentucky previously, I got to see their coaching and see them as a unit from the sideline. Also I spoke with coach  (John Calipari) and he told me how he showed interest in recruiting me. And as a program I’ve been watching them for a little bit so I know much about them.”

Maker said there’s still a chance he could stay in the Class of 2016, contrary to reports earlier last week.

More news and notes from Kansas at K-State 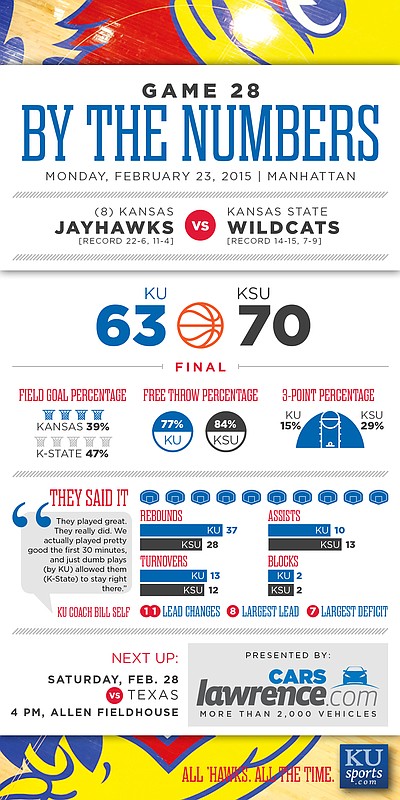