Kansas forward Xavier Henry runs over Texas Tech guard Nick Okorie during the first half Thursday at the Sprint Center in Kansas City, Mo. Henry was called for a charge on the play.

Kansas basketball: In pursuit of 2,000

KU’s men’s basketball program is approaching a major milestone. Keep an eye on their progress and look back at what got the Jayhawks there.

Fansfrom all over root for their teams at Kansas City Power and Light District's Live Block. 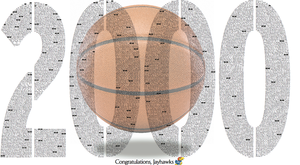 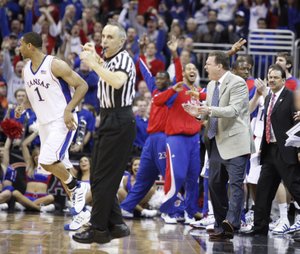 Today’s Kansas University-Texas A&M game marks the second meeting between the teams this season. The Jayhawks (30-2) stopped the Aggies (23-8), 59-54, on Feb. 15 in College Station.

“We were fortunate to win the first time,” KU coach Bill Self said. “We didn’t play great. They didn’t either. It’ll be a tough game. They don’t give up easy baskets.”

“They are really tough on the boards,” KU center Cole Aldrich said. “They had 20 offensive rebounds on us (to KU’s eight). We have to keep them off the glass.”

The Aggies are led by first-team all-league performer Donald Sloan, who had 15 points in the first meeting.

“He’s tough to guard,” KU guard Tyshawn Taylor said. “He can make tough shots. His team depends on him a lot to make plays and do different things.”

A&M coach Mark Turgeon will be seeking his first victory in five tries against his alma mater. KU beat his Aggies, 77-71, in a Big 12 tournament semifinal on March 15, 2008, in the Sprint Center.

“Turg has done as good a job as anybody in the country,” Self said. “We met a couple years ago in the same setting. They’ll be ready.”

Turgeon was asked how the Aggies will combat a pro-KU crowd.

“We know there will be a lot of Jayhawks in here. But we’ve become a pretty good road team down the stretch. We've won four of our last five road games. We'll treat it like a road game,” Turgeon said. “I just hope we can get healthy overnight and give them a good game. Seeing Bill’s face at the end of the game, I don't think he was happy with his guys, so I imagine the Jayhawks will be ready to play tomorrow, and we have to match their intensity.”

Guard Dash Harris (sprained wrist) did not play in Thursday’s 70-64 victory over Nebraska and is listed day-to-day.

KU forward Marcus Morris was whistled for a technical foul along with Tech’s D’walyn Roberts in the second half. Morris yelled in the face of Tech’s Darko Cohadarevic, who fouled Morris’ brother, Markieff, then pushed Markieff following the contact.

“At first I said, ‘Stop playing dirty and keep your hands to yourself,’’’ Marcus Morris said of his comment to Cohadarevic. “It was just a little face-to-face confrontation. It was nothing more than that.

“I was upset,” Marcus added. “It was a great foul, but the stuff after the play wasn’t called for. I felt I had to step in and say something.

“Anytime when a team is playing dirty and you feel they don’t respect us and are trying to do something to hurt our players we are going to turn it up,” Morris said. “It shouldn’t have to get to that. We should already have it turned up.”

KU is now tied with North Carolina in all-time wins (2,000). The Tar Heels lost to Georgia Tech in a first-round ACC tournament game Thursday. KU could own second place on the all-time list behind Kentucky (2,017) with a win today.

KU was caught napping when John Roberson went coast-to-coast, hit a layup and was fouled, cutting KU’s four-point lead to 65-63 with 5:55 left.

“The official put the ball in play, and we were walking down the court. That’s awful. Those things have and will continue to be talked about,” Self said. “Hopefully it won’t happen much in the future.”

Aldrich said: “They just threw it in quick, and we fell asleep, didn’t realize the ball was in until the crowd kind of gasped. It’s one of those things that we’ve really got to touch up, because those things can really hurt us in the future.”

Sherron Collins, on KU’s mind-set: “A lot of people don’t think we’re motivated to win this tournament, but we’re motivated because we want to keep playing to get better. You beat all these teams in the regular season, you can’t come here and lay an egg.”

Markieff Morris on KU’s mind-set: “We were scared to lose. When we got in that mind-set, if we lose we’re done, so we started playing better.”

A&M’s Donald Sloan said it about today’s meeting with KU: “We had an opportunity earlier in the year. Kind of let it slip by. This is another chance. I guess walking through it, we'll see tomorrow. I think our guys are ready. We're prepared. And come tomorrow I think our guys will be ready.”

I think the refereeing of all games in this tournament is weak.

It didn't look like KU had their full bench yesterday, some of the walk-ons appeared to be missing.... are you only allowed to dress a certain amount for the tourney?

I keep waiting to hear more on Josh Selby....i know its march and more important thngs (nat'l championship) are takin place these next few weeks....but from reading on rivals its sounds like mr. selby is leaning towards callin kansas his alma mater

I thought the twin's both handled themselves very well in regards to that foul. Darko should have been T'd up for the extra shove. The follow-up call to give Marcus 4 fouls was ridiculous and the 3 second calls just on KU are getting old. Don't these officials know the public can rewind game tape? How could they miss that goaltending call? Couldn't you find a decent throwing chair Pat? It's nice to see you inhereted the old man's fire.

I have to disagree about Cohadarovic. After fouling Kieff' he was pushed off-balance by his own teammate and as a result fell into Markieff. That being said, I was still glad to see Marcus stick up for his brother and teammate. On a similar note, the Indiana Pacers and Phoenix Suns got into a scuffle a few days ago and something happened (or lack thereof) that made me smile. Brandon Rush's teammates---Watson and Granger---were about to square up to fight some Suns and Rush was nowhere near the fight. Why did it make me smile? I couldn't imagine Rush letting his Jayhawk teammates get into a brawl oncourt without his help. Just another reason college basketball is the greatest sport on the planet.

It looks like Selby will announce next month at the Jordan Brand Classic.

The officiating is not good. Three officials and they miss calls that are obvious. The call was not right. Kanstucky was right on. If a KS, player had shoved a Tech player he would have been thrown out of the game. I think they choose the refs from our opponents prior graduation class. We are playing 8 opponents most of the time.

"Seeing Bill’s face at the end of the game, I don't think he was happy with his guys, so I imagine the Jayhawks will be ready to play tomorrow, and we have to match their intensity.”--Turg

I love Turg's needle. He apparently learned a lot from Larry Brown about how to get under someone's skin without scratching the surface.

KU absolutely does not want to enter this game thinking about the last game. This is a "next" situation, if ever there were one. But Turg is trolling "the last game" bait...not for Self but for his players that might read such quotes.

Think "next" and win.

Cearle - 12 I believe is the number for post season play. I don't know if it's a rule for the Big XII but it is for NCAAs. See the picture of Mario's shot and you can see Witherspoon and Morningstar sitting in the crowd.