Kansas forward Xavier Henry soars in for a dunk over the Michigan defense during the second half, Saturday, Dec. 18, 2009 at Allen Fieldhouse.

Which were you most disappointed in after KU's 75-64 win over Michigan? 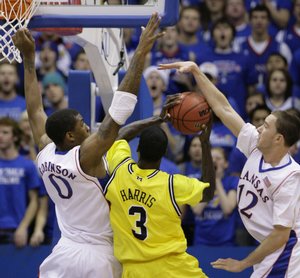 Kansas University freshman center Jeff Withey was deemed academically eligible Friday after his first-semester grades were turned into the compliance office. He and fellow freshmen Elijah Johnson and C.J. Henry did not play: coach’s decision.

“It was one of those games we should have been able to play everybody if everybody would have taken care of their business,” coach Bill Self said, referring to the regular rotation players not building on an early 21-point lead.

Tradition-rich KU recorded its first-ever victory against Michigan against five losses. A reporter jokingly asked Self if he felt “giddy” after the breakthrough victory over the Wolverines.

“Yeah, that’ll look great on the resume,” Self cracked.

“We told our players that (about 0-5 mark). I don’t think we’ve played them since ’92. Michigan had a decent amount of players (Fab Five) around that time. They’ve been great over time, going way back. Some of the greatest to ever play the game came out of Michigan. I’m happy we won the game. That stuff doesn’t even register to me.”

Not many for Manny

Michigan’s Manny Harris scored 16 points, six under his average. He hit six of 15 shots, including two of seven threes.

“Xavier (Henry) guarded him well, but Brady (Morningstar) was obviously the best defender on him,” Self said. “He is a good player. If Brady is going to guard Harris, you need ‘X’ in to score and Sherron (Collins) in to run the team. I thought Brady played well for his first game back (from suspension).”

Markieff Morris, who had one point and one rebound, fouled out while playing just nine minutes.

“At times he was frustrated. He thought he got a couple ticky-tack fouls,” Marcus Morris said of his brother. “I told him he can’t argue with the refs. That’s their job. That’s what they do. If they are going to call a foul, try to adjust to it. It just wasn’t his day, get ’em next time.”

Allen Fieldhouse was mighty quiet most of the second half.

“We have great fans. They were cheering trying to get us to come alive,” Collins said. “I think the energy was sucked out of the fieldhouse the second half (by KU’s play).”

Marcus Morris on Self’s postgame talk: “He said he thought we could have played a lot better. He said the first 17 minutes is the best he’s ever seen us play all year. The last three minutes we gave them a chance to come back.”

Junior center Cole Aldrich was held without a field goal for the first time since the 2008 national title game against Memphis. The last time he did not make a field goal with at least one attempt was versus Kansas State on March 1, 2008. ... KU has won 48 straight home games. ... Self is 7-0 against Michigan, 1-0 at KU. ... KU held Michigan to 35.8 percent shooting, marking the 84th-straight opponent the Jayhawks have held under 50 percent. KU has held nine of its 10 opponents under 40 percent shooting.

"Cracked" means "Joked." I think the meaning is clear.

i agree with Lebowski....to a point. the problem with the piece is that "giddy" is in quotes...as if Coach Self said that exact word.

Self was being sarcastic saying it would look great on the resume'....that is definite Self deadpan...having fun.

Yes, the writer should have used the actual question, then the Self response. "giddy" shouldn't have been used in the way that it was.

what's funny is, Coach Self couldn't care less about any of this stuff. even if he had been the coach for all five losses, and the last time we faced them was 17 years ago, it still wouldn't have mattered. what matters is we're 10-0 this year.

the fact that Self himself, is undefeated vs. UM doesn't affect him either. that's the part that should be emphasized.

Love the login, not the analysis.

I thought it was extremely clear he was joking. The sentence before says a reporter "jokingly" asked Self, and then Self "cracked" that would look great on the resume. That is not taking anything out of context. If you think it is, you could also argue that quoting Self after a game is "taking it out of context" since the full 15 minute interview wasn't reported.

Lay off Gary and the White Russians for a bit.