Turner Gill, in this undated photo, started his coaching career as an understudy to Nebraska football coach Tom Osborne and ascended to assistant head coach under Frank Solich. 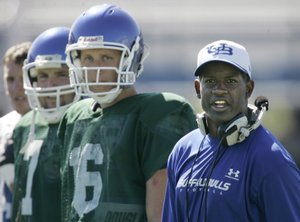 Turner Gill expected to take over as Kansas football coach

Getting to know Turner Gill ...

KU has offered Turner Gill the head football coaching job. Would this be a good hire for the Jayhawks?

Tommie Frazier had no shortage of kind words to say Saturday in support of Turner Gill, his former quarterbacks coach.

But the one-time Nebraska quarterback and 1995 Heisman Trophy runner-up kept coming back to one key virtue: patience. Frazier repeatedly described Gill, to whom Kansas University has offered its head coaching job, as a “very patient person.”

“He treats kids as if they were his own kids,” Frazier said. “He’s going to sit down with them and talk. He’ll listen to you and tell you his side and talk through how things are done.”

“He’s not the kind of guy to fly off the hinges and yell and scream, all that kind of stuff.”

Gill served as Frazier’s quarterbacks coach, helping lead Nebraska to back-to-back national titles in 1994 and 1995. Gill won three national championships as a Husker assistant, the third coming in 1997. Gill, who since has led the University at Buffalo to a bowl appearance and Mid-American Conference title, also coached Heisman-winning quarterback Eric Crouch at Nebraska.

“He taught me to be a student of the game,” Frazier said. “He taught me you’ve got to be two, three, four, sometimes five steps ahead of the competition. He knows how to teach young quarterbacks how to read defenses, which is something you don’t always see in quarterbacks coming out of high school.”

Away from the football field, Gill’s resume is far from blank.

According to his Buffalo biography, Gill has served as a United Way spokesperson, an honorary chairman for the American Heart Association, the American Red Cross and Cystic Fibrosis Foundation. He is active in the Fellowship of Christian Athletes and is a member of the American Football Coaches Association Ethics Committee.

Another player who shared the sideline with Gill offered sentiments similar to those of Frazier’s.

“For the fans of Kansas, once they get to know him and get past that transition phase, people will start to get to know him as well as we know him up here in Buffalo,” said Buffalo defensive lineman Dane Robinson, who finished his senior season in November. “I think he’s dedicated to rallying the community. Not just the university.”

On the field Gill has established a reputation as a program-builder. He pulled a once-moribund Buffalo program from 1-10 the season before he took over to 8-6 in his third year. In the two-season stretch including 2007 and 2008, Buffalo won 13 games — one more than it did in the program’s first eight seasons as an FBS (formerly Div. I-A) team.

Asked about the ascension of the Buffalo program under Gill and the coach’s potential at KU, Frazier used a familiar term.

Said Frazier: “Any time there’s a coaching change, it takes patience. It depends on what kind of assistants he’s bringing to the program. They were very patient with what he was doing at Buffalo. Kansas will be better off with him.”

— Dugan Arnett contributed to this report.

Since when aren't coaches supposed to "yell and scream" lord. As long they don't put you down they can yell all day!

onlyone why mention him, I'm looking forward not back to the cellar dwellar.

Time will tell if TG can become successful Big 12 coach, in meantime nice to have a class act in the kitchen.

Agree with Lighthawk, It's a done deal. KU will win 4 games next year so everybody will need to be patient. I think we need to understand that the expectations at KU are different with football now. I think Gill understands that Lew and Jayhawk nation expect wins now and competing for championships. During the Terry Allen years I don't think that was the case. We'll get better athletes and more speed and better production. Another scenario I see is more hands on recruiting especially with top gun quarterbacks in the country. I hope he makes a call to Jacoby Walker soon.

Glad to have Coach Gill on board as well, lighthawk and kranny. It will be interesting to see who he recruits for his coaching staff and what happens with our recruits. I have read a lot of blogs from people being disappointed about the direction Lew went on this one, I'm taking the wait and see approach. Welcome to the family Gill.

Why do we have to wait and be patient?

If this is such a good hire, than why do we have to set our sights low next year?

If we had hired Harbough or Tuberville or Fulmer or handful of others, we would be talking about an 8-10 win season next year. Now we are talking a 4 win season. Shoot that would be 1-7 in the Big 12, and we have Baylor on our schedule, so I assume we won't win any other games.

jhawkrulz, you are truly pathetic. Anytime there is a coaching change, there is a transition period and you have to set your sights a bit lower.

TG will make KU, unfortunately, a great head coach. Too bad so many of you are against him because he was a great Huskers Quarterback and Assistant Coach.

I posted this before and it bears repeating. KU Nation does not seem worthy of this man. I hope you can get the venim out of your system and get behind a fantastic person and coach.

It is possible to have a coach who doesn't poke, jab, make demeaning comments to his players, put them in physical danger by forcing them to perform unsafe acts, etc, etc, etc., and still WIN football games.

"I hope you can get the venim out of your system"

I believe the correct spelling is venom Big Red. I would recommend thumbing through a dictionary when you are on your combine.

As for not being worthy to have a coach like Gill, I think you are talking out of your backside. Kansas University supports the athletic programs like no other and some people are not sold on having Herm Edwards Jr. as their head football coach. 20-30 at a MAC school really? His daughter is working for the athletic department which looks bad for a school that has put themselves under the microscope for other minor violations. This just feels bad and as a longtime KU fan I am extremely unimpressed this morning. I could be way off base here, but I think this hire will prove to be really bad for this institution. What happens if GIll does not take this program to the promise land like some of you are expecting and he gets the MM treatment. Then all of the media outlets start with the KU is committing racial prejudice against a good man who could not win in the Big 12.

spelling smack is the lowest form of smack. It means that you have absolutely nothing of value to say so you resort to grade school behavior.

And, not everyone in NE rides a combine. For the record, I have NO idea what a combine even looks like.

I live in the big City. Do not own overalls and have Never Ever put a piece of straw or hay or whatever in my mouth to chew on.

Anymore stereotypes that I can shoot down for you.

Please remember though, spelling smack is really low and actually is an insult to your intelligence. But then again, you are a squak. Nothing more to say.

jhawkrulz says - If we had hired Harbough or Tuberville or Fulmer or handful of others, we would be talking about an 8-10 win season next year. Now we are talking a 4 win season.

Actually, Kranny (not we) was the person talking about 4 wins, and you now make 2. If we means the uni and FB team, my guess is that "we" expect to win all the games. The patience comes in the understanding that it might not happen the first year. It also is recognizing that there are better things ahead.

Again, what's with all the hissy fits? People are just yanking your chain. If you really want to make a valid point try ending your comment with something other than bwa ha ha or truly pathetic because well that's truly pathetic. Why don't you go with the fat coach jokes, those are always a hit.

We aren't gunna have to be that patient next year.... We return 15 starters from last year and we rotate back to the weak schedule in the South. I think that we will at least be 7-5. Hopefully TG will bring in a great defensive coordinater and if we can actually play some defense like we had in the 07-08 season, then we could have as many as 9 or 10 wins.

That must be a squak thing.

You are pathetic, jayhawk nation is even more pathetic.

I hate to see a good man associated with such a pathetic group of losers.

Stop pretending to be a Jayhawk when it is painfully obvious you are a husker fan. If gobigredturd has a problem let him defend himself.

Awesome to see that on a great day with what seems to be a great person and great head coach joining the ranks of our beloved KU and beloved Jayhawks that the KUSports boards can still find ways to be rude, ignorant, and infantile. Whether you like it or not, Turner Gill is the Head Coach of the Kansas Football Program, and if you really love the Jayhawks in your heart of hearts, you'll be out there yelling and screaming for him and hoping he can do what Lew thinks he can do, regardless of what you think he can. Lew has hired Randy Edsall and Skip Holtz as football coaches in his career; I think he knows a thing or two about what makes a successful one, and the guys Gill's brought along for the ride already seem like major upgrades from their predecessors at their respective slots. Hell, the simple fact that he had two guys with jobs elsewhere already signed up to follow him wherever he got the chance to show what he could do speaks volumes of the respect that this guy commands from his peers. Doesn't hurting having a guy with Tom Osborne's resume in your corner either. Anyone who wants to focus on his record at Buffalo is completely missing the point on what sorts of miracles he actually worked there just to get Buffalo to that level, which Buffalo alums will likely corroborate if you ask them. And Gill had a ton of success as a coach at Nebraska and was a player development director for the Packers, which is a great skill set to bring to a college coaching position, so his bona fides are more than OK with me. Bottom line is like it or hate it, he's the coach now, his players seem to be willing to run through walls for him, and if you're asking yourself how we managed to lose those last 7 games this season it's because that exact component was missing. Welcome to the Hill, Coach Gill and Rock Chalk Jayhawk!