Brandon and Sarah Warner, 2003 Kansas University graduates, had a party divided on Saturday during KU's first game of the season against Central Michigan University.

The couple, who live in Lenexa, tailgated this weekend with CMU fans, including Sarah's father, a CMU professor; her brother, a CMU graduate; and his girlfriend, a CMU senior, outside Memorial Stadium before watching the game, the first time the teams have competed against each other.

"It's going to be a long day for KU's defense," said Jeff Scott, Sarah's 23-year-old brother and recent CMU graduate.

"The quarterbacks on both teams are sophomores and fun to watch," Sarah Warner said.

As it turned out, KU's starting quarterback, Todd Reesing, fared better in the game. He threw four touchdown passes and led KU to a 52-7 victory."It's a lot of fun, a friendly rivalry," said Scott's girlfriend, Michelle Breier, a 21-year-old CMU senior.

The maroon and white gear she and the other Chippewa fans wore was scarce among the hundreds of devoted Jayhawk fans in crimson and blue, including Sarah's mother, Nancy Scott. 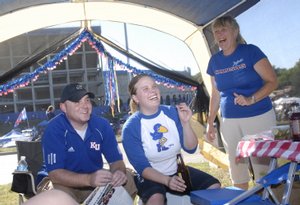 She said she expects the Jayhawks' season to go well but "we're taking it one game at a time."

For current Jayhawks, a bowl game would be a dream come true.

"If we don't go to a bowl game this year, there's going to be trouble as far as I'm concerned," said Joe Wiles, 24, of Lawrence.

"We lost a lot of close games last year," he said.

He has confidence in the team's defense this season, however, and said the new uniforms couldn't hurt, either.

Several Jayhawk fans cheer for KU during the first football game of the year against Central Michigan.