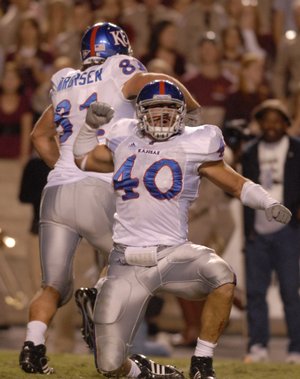 College Station, Texas — In so many ways, senior fullback Brandon McAnderson symbolizes the football team for which he plays better than anyone else.

A senior for Kansas University, McAnderson is tough and smart and humble and performs so much better than any other Big 12 coach would have guessed, save the coach for whom he plays. His appearance is deceiving. So wide and so thick, he has the look of a classic three-yards-and-a-cloud-of-dust back.

McAnderson did have six carries that went for three yards each in Kansas' 19-11 victory against Texas A&M in front of 85,341 fans Saturday night at wild Kyle Field.

He also had runs of 40, 33, 22, 20 and 17 yards. His 36-yard touchdown run late in the game, called back because of a holding penalty on Derek Fine, buttoned up KU's only unintentional penalty during a turnover-free night.

McAnderson carried the ball 21 times for 183 yards and two touchdowns, quite remarkable for a back who was clocked at a sluggish 4.8 seconds in the 40-yard dash.

All at once now football scouts across America, put your stopwatches on the table, pick up your sledgehammers and blast away. Clocks are for track. They don't measure football speed. They don't measure vision and balance and determination. They don't measure the quickness of a man's feet when he needs to make the right cut at the precise time to make tacklers miss. McAnderson scores so high in those areas he has rushed for 688 yards and nine touchdowns, averaging 6.7 yards per carry.

How does he break such long runs?

On his final two carries of the first quarter, McAnderson had gains of 20 and 33 yards. Then he disappeared. Jake Sharp entered, and McAnderson wouldn't carry the ball again for another 13 minutes. Television viewers might have been screaming at their sets for him to re-enter, but McAnderson wasn't.

"That's just our basic rotation," McAnderson said. "We like to keep guys fresh. Jake (Sharp) was having some good runs, too. As long as we're doing well, I don't really care who's carrying the ball."

At Lawrence High, McAnderson took handoffs from Tommy Mangino, son of KU coach Mark Mangino. Other coaches didn't have the luxury of seeing as much of McAnderson, but more than the exposure, it was Mangino's ability to see Big 12 football players who don't fit the Big 12 prototype that made the difference. McAnderson was too slow, Sharp and Todd Reesing too small. Mangino's eye for talent plays a huge part in KU's 8-0 start.

"I have to credit coach because he came in my living room, sat there and told me, 'Eventually, I want you to catch the ball, I want you to block people, and I want you to run the ball,'" McAnderson said. "It didn't really seem realistic at the time, but it's happened. That's why you have to trust the program."

McAnderson and the program have grown together, slowly, steadily, relentlessly, like one of his long runs.

Thanks Brandon, for staying waiting for your time to come.

I root for nobody on the team more than B-Mac. He's been nothing but class since his LHS days!

I wonder if Brandon got a helmet sticker from Holtz & May.

I bet Christian Ballard (Iowa) and Blake Lawrence (Nebraska) are kicking themselves for not going to Kansas! Thanks Brandon, for staying home! Rock Chalk!

Thanks B-Mac you truly stole the show yesterday