Kansas running back Brandon McAnderson races into the end zone for the Jayhawks' final touchdown against Nebraska. McAnderson tied a school record with four rushing TDs, and KU set a handful of other records in a 76-39 rout of the once-mighty Huskers on Saturday at Memorial Stadium. 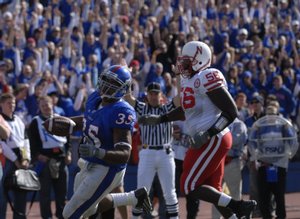 Holy Husker, Batman! What on earth was THAT?

Kansas University's football team didn't just win Saturday. It trampled the Memorial Stadium end zones to near-death. When the smoke cleared - if it ever did, or ever will - Kansas had a 76-39 victory over Nebraska. The same Nebraska program that unmercifully pounded the Jayhawks many, many times in the last 40 years.

Seventy-six. That's 11 touchdowns with one missed point-after - a day the historians will work overtime to sort out.

"I looked up at the scoreboard," linebacker Mike Rivera said, "and it was hard to believe."

Consider a sliver of what was achieved on Saturday:

¢ Kansas never has scored more points in a conference game.

¢ Nebraska never has allowed more points in ANY game.

¢ The 115 combined points are the most ever in a contest involving KU.

¢ Even when the Huskers were a national power a generation ago, they never put more than 70 on the lowly Jayhawks. KU was almost there in the third quarter Saturday.

The milestones go on and on and on - enough reason to take the KU record book and smash it to bits with a sledgehammer. It's worthless now.

Lost in the shuffle, somehow, was the fact that No. 8 Kansas improved to 9-0 overall and 5-0 in Big 12 Conference play. Which raised the question to KU coach Mark Mangino: What if someone would've told you three months ago that you'd win your first nine?

"I'd ask them what they're drinking," Mangino replied, "and see if I could get some of it."

Yet here the Jayhawks are, three games left in the regular season and still holding a round zero in the loss column. It really is remarkable.

"I'm not going to stand here and tell you that I knew we were going to be 9-0. That's foolishness," Mangino said. "But I thought we had a chance to have a really good team."

Not only are the Jayhawks good, they're good everywhere. After the defense carried KU to victory at Texas A&M last week, the offense had a day for the ages Saturday back at home.

Kansas went three-and-out on the first drive of the game, then scored touchdowns on its next 10 possessions. Reesing managed the machine brilliantly, completing 30 of 41 passes for 354 yards and six touchdowns.

More impressive, though, was the efficiency of the entire unit the entire day. Kansas ran 90 offensive plays, compiled 572 total yards and had one penalty, no fumbles and no interceptions. Oh yeah, and 76 points.

Really, can it get much better?

"Obviously, a lot has to go right," Reesing said. "We were moving the ball pretty good there. Running the ball, passing the ball - having a good mix."

Defensively, Kansas was caught off-guard by the pass-heavy game plan of Nebraska (4-6, 1-5). NU quarterback Joe Ganz, as a result, ended up throwing for 405 yards and four touchdowns.

But KU's five takeaways - and the offense's Zeus-like effort - made it a moot point. Heck, Ganz probably could've thrown for 1,000 yards and not overshadowed KU's work on the other side.

"Unbelievable," said Mike Wall, a representative for the Fiesta Bowl who was in attendance. "This offense is one of the most exciting I've seen."

Some of the 51,910 in attendance (a Memorial Stadium record) surely were a bit dizzy when it was all over. A 76-39 score isn't so shocking for a Kansas-Nebraska showdown - in basketball.

But in football, it's an unprecedented beatdown. One that will surely be talked about for years to come.

"I had conversations throughout the game with our offensive coaches," Mangino said. "We just said, 'Just keep running the offense. Let's keep rolling, run our system. Let the kids see if they can make some plays.'

"Now, I didn't think we were going to score 76 points today. But the kids played really well. They played smart, sharp football."

The Jayhawks are continuing to keep it business-like, even as the victories pile up on top of one another. Mangino said the locker room after Saturday's game was "happy, joyful, but there wasn't any wild celebration."

With more work to do, the Jayhawks won't be spending time patting their own backs. But rest assured, at least a few of them recognize the magnitude of what they pulled off against the Huskers.

It was, to sum it up in one word, historical.

"This is one of those games," Reesing said, "that you're never going to forget."

Another note from the game yesterday: those poor, poor Jayhawk male cheerleaders! They had to run around the stadium 11 times with the flags that spell out K-A-N-S-A-S. At the end of the 2nd quarter they all needed oxygen!

I remember all of the HUGE nebraska scores against us for many many years.

Does anyone know how and where to find a history list of past nu-KU football scores? This one really felt goooood!

Some incredible play on ESPN SportsCenter! Hope the video coordinator is busily updating the KU recruiting montage so they can get it on the Texas high school circuit ASAP!

it was to fun to be there and witness....our offense just cruised all afternon, and NU had nothing. like someone said behind me in the crowd, "more like black SKIRTS than black SHIRTS" on defense....very appropriate.

ESPN said that KU scored more points yesterday, than we did in the ENTIRE DECADE of the '80s!!!

It honestly did not sink in that we scored ELEVEN touchdowns against freaking NEBRASKA until almost 8 p.m. last night ...

It was great watching that game on TV and seeing a sea of blue. When I was at KU during the unfortunate pre-Mangino years, the Nebraska game was just the opposite, a sea of red with just a little blue. It's great seeing the 'Hawks fans represent.

They had it coming...and we still owe them for another 35 years!

Just think... We can probably do it again next year - in Lincoln!

I think we'll need our guard up in Stillwater next week, though.

Last night ESPN showed almost every touchdown (they lwft out the first) with some record breaking quote. The highlights were quite long. I cannot believe that Navy beat ND. The broken streak was the headline for sportscenter. I wonder which bowl ND will be asked to attend?

You're wrong, phoenix. I believe the toilet bowl is interested.

They lost the shirts weeks ago, and they definitely quit on the coaching staff a long time ago as well.

Unfortunately, Bo Pellini, Turner Gill, or whatever alumni they bring in next month will undoubtedly renew the attitude that attracted so many recent top recruiting classes. The days of 70-0 dominances is gone, but today won't be repeated either.

I'm glad that at least Mangino has the team winning with class. Some of these comments look like they were lifted from a tiger page.

And before interloper starts going off on "running up the score". KU's starters only played the first series of the 4th quarter (4 minutes). When Callihan threw in the towel and just ran the clock out with his 3rd string TB, KU responded similarly. It should be noted though, that their starting QB & WR were still the ones that scored the last TD.

No reason to bash the BBall program. Who knew about KU football? Mangino admits even he didnt figure on this success... I personally think this is great, and a HUGE boon in publicity for KU. Success builds success with better and better recruiting. I am pulling for football AND basketball! Can it be any better right now in November?

RALSTERkuMED95, a NATIONAL TITLE in FOOTBALL???? There's no way it can get better than that! I've never even DREAMED of that until about 2 or 3 weeks ago!!! Apparently, our fans are still ASLEEP and dreaming of another Big 12 Basketball Championship. Can anyone even comprehend a NATIONAL TITLE in FOOTBALL for KU? I couldn't either, but it is now a possibility!!! Our fans need to ACT ACCORDINGLY. Basketball can wait a few weeks!!!

my question is how long til a hurtin college comes callin on coach mangino, or how long til the rumors start about coach leaving? lets hope neither start now or for awhile

There's a big difference between the successful coaches in KU's past and the current coaching staff. We actually have an AD that's willing to pay the coaches and who is willing to go out and get anything the coaches need to build a respectable program here at Kansas. We have brand new facilities going in per Mangino's request and he became the fourth highest paid Big Twelve coach after a 7-5 season in 2005, just imagine what he'll get paid now!

With records breaking in both attendance and on the field Lew Perkins will not let this one go. Whatever somebody else is willing to pay, he will top it.

Good job Jayhawks. Past time to start planning for Oklahoma State on the road. Surely Coach Mangino and his staff have been doing this as soon as they woke up this morning. OSU has a great team, a great stadium, a great town and great fans. We need to show them bigtime respect and show up with a great gameplan. OSU is for real. Coach Mangino: Pump up the speakers ALL week at practice -- even louder than you did for Texas A&M if that is possible. Make your players LOVE the noise. Love it. Keep it up KU Players!!! You guys continue to make all of us Jayhawk fans all over the nation as proud as can be! Respect the Cowboys. Study hard all week. Eat and rest well. KU Fans: keep it up! One week at a time! ROCK CHALK JAYHAWK!!!

droberts...Put the drink down and go to bed.