'They're playing the best basketball in the conference'

Melvin Watkins, who is 1-0 as Missouri's interim basketball coach, realizes his unbeaten mark is in serious jeopardy today at Allen Fieldhouse.

"They are playing with a lot of confidence, hitting shots and playing very well as a team," added Watkins, in his second year at MU after serving as head coach six years at Texas A&M and two at UNC-Charlotte.

The Tigers defeated Kansas State, 74-71, in Columbia, Mo., Sunday in their first game under Watkins, who took over for Quin Snyder. Snyder stepped down Feb. 10.

"Our preparation is, we have to defend more than just (Brandon) Rush," Watkins said of KU's standout freshman guard, who averages a team-leading 14.3 points per game. "We have to keep them out of transition. We have to go in there and play with confidence and some of the best basketball we've played on the heels of the fact we beat them here."

MU topped the Jayhawks, 89-86, in overtime Jan. 16 at Mizzou Arena. Since then, the Tigers have dropped six of seven games.

"Surely that's a game they probably feel they let slip away," Watkins said of the Jayhawks. "Our hands will be full." 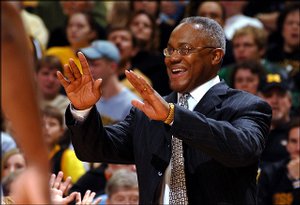 Missouri interim head coach Melvin Watkins enjoys a laugh with one of his players Sunday, Feb. 12, 2006, during the second half of their 71-74 victory over Kansas State in their NCAA basketball game in Columbia, Mo. Watkins replaced Quin Snyder, who resigned Friday.

He was asked if the loss to rival MU somehow sparked KU.

"Well, if it's been a spark, that was not our intent," Watkins said. "They have been playing some inspired basketball whatever the reason may be. You have to look at the coach No. 1, but they are mature now. They were young early on and making mistakes young kids make. They've gone through the league and played some tough games. You are seeing a team grow up right before your eyes."

As far as his own team, Watkins doesn't know what to expect as the squad continues to regroup without Snyder.

"The best thing we can do is try to take one day of preparation at a time," Watkins said. "What I hope I'll be able to do is have a shoulder for our kids. It's been tough on the kids. Sometimes that gets lost in the conversation. These kids have gone through a bit. Hopefully I can hold it together for them, have some confidence on the court and fun with the game."

Collins an all-star: KU signee Sherron Collins, a 5-foot-11 senior guard from Chicago's Crane High, will play in the McDonald's All-America game March 29 in San Diego. Darrell Arthur, 6-9 from Dallas who is considering KU, Baylor and SMU at this time, also will play in the game. The rosters were for a short time Friday available on the McDonald's Web site, but later in the day they were not available. The rosters will be released officially in coming days.

Experienced coach: MU coach Watkins arrived at Texas A&M in 1998 after guiding his alma mater, UNC-Charlotte, to back-to back NCAA Tournament appearances and a pair of first-round victories in his only two seasons as a head coach. He was 42-20 at Charlotte.

Good defenders: KU senior Jeff Hawkins commenting on his and teammate Robinson's defense on opponents. "We're kind of like a little tag-team - a WWF tag-team," he joked.

Five minutes later: Official start time is 2:50 p.m. today, not the 2:45 shown on the original schedule.