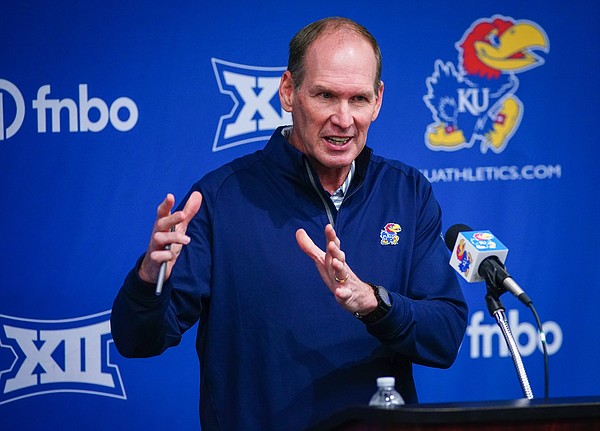 The six players from Buffalo who announced this week that they’re following Lance Leipold to Kansas are huge additions because of the positions they play and the culture they can help create.

But before we get too far into analyzing things, it’s worth pointing out that I didn’t watch a single snap of Buffalo University football last season.

So I don’t know who can play, who can’t and what any of those guys’ strengths and weaknesses are.

It’s been 28 days since Leipold was officially introduced as the Jayhawks’ new head coach, and while nearly everything he has done in the four weeks since then has conjured up an image of a coach who knows what he’s doing, the fact remains that Year 1 at Kansas still figures to be a major challenge.

These additions, however, may make the task easier. Not from the perspective of wins and losses necessarily. Rather, from the idea of laying the foundation and establishing the culture for what Leipold and company hope will lead to an eventual turnaround at Kansas.

Charlie Weis did this to a certain degree, but not with the type of players that Leipold is bringing with him. Weis’ Notre Dame guys were either part-time players at the back ends of their careers with the Irish or came to KU with some kind of injury concerns.

David Beaty also tried it with a Texas A&M transfer or two, but his attempt caught even less traction.

Leipold is bringing with him accomplished players who all would have been a major part of Buffalo’s team during the 2021 season.

Eddie Wilson and Novitsky were all-conference selections last season and considered to be among the most talented returners in the MAC.

McGee, Miller and Trevor Wilson are players who were working within the system to establish themselves as key pieces of Buffalo’s future, moving from special teams duty and learning from upperclassmen to spot starts and key roles as reserves.

And Ford, who redshirted as a freshman in 2020, was considered by many as a likely starter in 2021.

Although Buffalo has had much more success than KU in recent years, the Jayhawks’ roster has finally started to resemble one that belongs in the Big 12 Conference. So the competition Leipold’s crew will have when things get going should be stout. None of those six players — or any others Leipold might still bring with him — will have anything handed to them at KU.

But whether they win starting jobs and play major snaps or fall into reserve roles, bringing them into the program both bolsters KU’s depth at key positions — particularly offensive and defensive line — and gives the rest of the roster a substantial sounding board.

These guys know Leipold and his assistants. And they can answer for the rest of the current Jayhawks questions of why this, how come that and when do we get to this?

The mere fact that many of these Buffalo transfers can actually play is purely a bonus. There’s no doubt that their skills and talent may help speed up KU’s journey from bottom dwellers and perennial laughingstock to competitive program that can start talking about winning games again.

But even if that doesn’t happen in right away, these guys can still play a huge role in rebuilding the program.

For one, they all have multiple years of eligibility remaining, which means they, too, are investing in this program’s future.

For two, their understanding of the way Leipold and his coaching staff run their program will be huge in helping the rest of the roster understand it and adjust more quickly.

This might not be the same thing as Oklahoma landing Jalen Hurts from Alabama, Kyler Murray from Texas A&M or Baker Mayfield from Texas Tech, but, by Kansas standards, it might wind up being just as big.

More important than any of it is the fact that the willingness of these six players to follow Leipold to Lawrence shows clearly how much of an impact he made on the players he coached in the past. And if he can create that same kind of connection with his players at KU, there might be hope for the future of Kansas football.

Matt - One question that I don't understand. We had 21 players coming in this year - according to Rivals. Now we have 6 more. Is the cap lifted because of COVID or does this get balanced because of a few players leaving, or is this a situation where some will have to redshirt? Thanks

We'll have to look into this a little more, but there are always ways. Whether you talk about blue shirts (counting guys ahead), gray shirts (guys join but pay part of their scholarship), redshirts or more transfers, there are creative options to make it work. It would be much harder with like 10-15 players, but 6 or 7 should be doable.

Again, though, we'll take a deep dive into the numbers and scholarship situation in the weeks ahead.

You're the best - thanks

These 6 that have followed Coach as you said Matt , shows you or should anyways what these kids think of their Coach , , total respect.

These 6 are quality players. Eddie Wilson , is a big boy what like 6'4 and 325 pounds for sure will help the lose of Harris and Dajon those were Big time losses for us. Shows how good they very well could become , one going to Auburn and the other Tennessee ? - -So getting Wilson was HUGE.

I would say the biggest commit was Novitsky. Not sure IF true but heard he is rated like the 4th best Center in the Country. This kid is legit NFL. Love it as he already knows the system and a kid that can come in a QB the offensive line. - You know he is a big time commit just by looking at the other Schools that was showing interest or wanted him from the names of the Schools. - other Schools that were after him were : Ole Miss , UCLA , Maryland , Florida , Tennessee , North Western , Texas , Baylor , /////// & Purdue to name a few. - Not to shabby of a list.

Then Trevor Wilson is a very quality WR. - Ran the fastest time in the 400 meter State in Florida - Had 16 receptions for 319 yards and 3 TD'S i like 7 games - fastest player on the Buffalo team.

All they guys can help us a lot. - the other 3 are all very decent players that provide depth if nothing else - -Love the additions @ offensive Linemen and 2 DL - -things are looking better

OU’s transfers were the opposite end of the spectrum in that the culture was already well established. Hopefully, these 6 can be the starter for our culture.

If I was a Buffalo fan then I would be totally devastated by all the losses, coaches and players.

Hi Dale, Buffalo is a Pro Town. As long as the Bills are winning, western New York is happy! The Bulls tend to get overlooked.

Personally I think this is a very big deal. It is shoring up some loses and building for the future.

One of the interesting aspect of these recruits is their homes. Not traditional recruiting centers for KU. Maybe it opens some doors to other areas. It would seem that it does a little bit to stop the hemorrhaging perception. Maybe we’re transitioning from losing players to attaining players and quality at that. The biggest and crucial change in perception for future recruits will have to take place on the field. Can this staff field a Big12 caliber team? We’re almost as far from the bottom as the rest of the bottom is from the top of the conference.

Win three games and I'll build Lance a statue outside The Wheel!!!