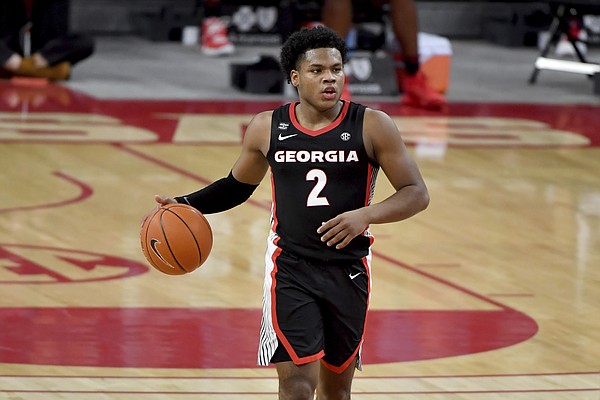 Georgia's Sahvir Wheeler (2) against Arkansas during the first half of an NCAA college basketball game Saturday, Jan. 9, 2021, in Fayetteville, Ark. by AP Photo/Michael Woods

Monday afternoon, on a live podcast with Jeff Goodman and The Field of 68 Media Network, Georgia transfer Sahvir Wheeler orally committed to Kentucky.

Asked by Goodman what made the difference, Wheeler, who led the SEC in assists last season, said he was excited to join a program that would get him in the NCAA Tournament, adding, “a roster that’s set up to win a national championship.”

Wheeler called joining the UK roster “a point guard’s dream,” while adding that he was looking forward to playing with talented players all over the floor and wings who can shoot.

Asked on Monday what he thought about following Washington to Lexington, Kent., Wheeler pointed out that Calipari has never been afraid to put multiple point guards on the floor at the same time.

That very idea is one Kansas coach Bill Self has had a lot of success with throughout his coaching career, particularly at Illinois and Kansas. And Self, in targeting another point guard to add to the 2021-22 roster, also is aiming to get back to that style of play after operating mostly with a primary ballhandler since the 2017-18 season.

The Jayhawks still have one scholarship to hand out and remain in pursuit of several guards, both true point guards and long-range shooters. Most notable on the list is Arizona State transfer Remy Martin, who announced last week that he was entering the transfer portal.

KU's current recruiting class is ranked No. 14 nationally by Rivals.com. It likely would crack the top 10 if the Jayhawks add another player, which is pretty much a certainty.

Most national publications have Self's 2021-22 squad as a top-10 team in the national rankings at this point in the offseason. KU is still waiting on NBA draft decisions from guard Ochai Agbaji and wing Jalen Wilson.

If either player elects to remain in the NBA draft pool, KU would have another spot to fill on its roster.

nothing to do with this kid but if i had one year to play left it would be hard to pick KU given the current uncertainty. unless I am wrong we could possibly be banned from next year's tourney, correct? if that's the case not sure any one year player chooses KS.

I can see your point, but one year of sitting on the bench vs. a year of some playing (and maybe a lot of playing)? I think players who are choosing other schools are thinking they aren't likely to get to play at Kansas because KU has their first line pretty solidly set. As for getting into March Madness, remind me again how many years in a row Kansas has been vs. Kentucky, Duke and North Carolina? Yeah, I think these people going other places are just doubting their own talents.

I'm with you, wasn't thrilled about this guy.

I thought Bill Self was a closer? Someone needs to let him know coffee is for closers.

I think HCBS has been more prone to put two combo guards on the floor and hope that one is a PG. I think he prefers the length and defense and knows that playmakers will score. Garrett was by far a combo guard not a true point guard. In fact he usually used the combo guard from the year before to move to the PG position the following year.

I'm sure there are several others, but it doesn't seem like self goes PG as much as he goes combo.

Jeff - Excellent point though Mario and Sherron were sort of the opposite; scoring PG replacing a combo (pair with RussRob). Maybe the best example was Graham following Frank, though they also fit into the combo guard scenario.

Someone commented on there being too many guards but it seems to me Coach Self is just stacking the roster for developing into the future pairs or triplets.

Now that Martín is at least lined up to join the team, I’m wondering about the comparison with UKs recent guard additions. TyTys height would have been nice, and Wheeler is a proven assist machine, but I like what Coach has done with the roster this offseason. Both for this year and next.