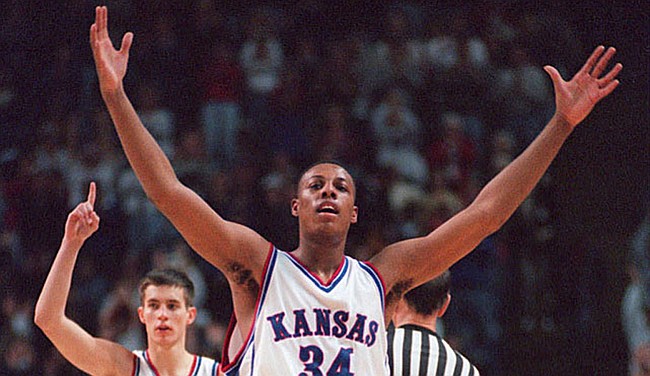 Former Kansas forward Nick Bradford was just a freshman when he first realized that teammate Paul Pierce was destined for greatness.

And the two years that Bradford spent as a teammate of Pierce’s from there only solidified that belief.

On Sunday, Pierce, 43, was one of 16 people selected for induction into the Naismith Memorial Basketball Hall of Fame as part of the 2021 class.

Pierce left Kansas after his junior season — Bradford’s sophomore year — after earning consensus first team All-American honors and landing as a finalist for national player of the year.

In three seasons as a Jayhawk, Pierce helped lead KU to a 98-11 record and cracked the top five on the program’s all-time scoring list with 1,768 points.

He still sits in 10th place on the scoring list today and also ranks in the top 20 in rebounds and steals. His No. 34 jersey was retired in the Allen Fieldhouse rafters in 2003.

None of those accomplishments came without a ton of hard work.

“He was a gym rat,” Bradford said. “And he forced me to be in the gym even when I didn’t want to be. His level of commitment to basketball made him a great teammate.”

After leaving KU, Pierce was drafted by the Boston Celtics with the No. 10 overall pick in the 1998 NBA draft. By the time his pro career was over, his list of NBA accomplishments out-shined what he accomplished at Kansas. He was a 10-time NBA All-Star, four-time all-NBA selection, NBA champion in 2008 and NBA Finals MVP that same year.

“I am happy I was up to the task and brought a championship to the city of Boston,” Pierce told the Hall of Fame on Sunday. “It really has been an amazing ride. I am so thankful to be among these legends. Who knew a kid from Inglewood, California would be enshrined in the Naismith Basketball Hall of Fame?”

Pierce’s 26,397 career points put him 15th on the NBA’s all-time scoring list. And, in February of 2018, his jersey was re-tired by the Celtics, making him just the 23rd player in the storied history of the franchise to see his number raised to the rafters in Boston.

“Having my name in the rafters in Boston I thought was enough,” Pierce said in an NBA on ESPN video chronicling his journey to Sunday’s announcement. “But then to get into the Hall of Fame, that’s just the end of the storybook. And it’s forever.”

According to KU, Pierce’s 19 seasons in the NBA — he also played with Brooklyn, Washington and the Los Angeles Clippers before retiring — made him the longest tenured Jayhawk in NBA history.

Pierce also is slated to be inducted into the National Collegiate Basketball Hall of Fame with the Class of 2021 in November in Kansas City, Mo.

Here's a quick look at the rest of the members of the 2021 Naismith Hall of Fame class who will enter the Hall with Pierce later this year.

THE NAISMITH MEMORIAL BASKETBALL HALL OF FAME CLASS OF 2021

RICK ADELMAN [Coach] – Adelman coached in the NBA for more than three decades, compiling an overall head coaching record of 1042-749 (.582). His teams reached the playoffs in 16 of his 23 seasons at the helm and he led the Portland Trail Blazers to two NBA Finals (1990, 1992). Adelman ranks ninth all-time in NBA career wins, including two 60-win seasons and 11 50-win seasons. He reached 200 wins in just 288 games, a record at the time. Adelman is a three-time NBA All-Star Game head coach (1991, 2001, 2003). He coached several Hall of Fame players including Clyde Drexler, Tracy McGrady, Yao Ming, Dikembe Mutombo, Chris Mullin and Drazen Petrovic.

CHRIS BOSH [Player] – Bosh is an 11-time NBA All-Star (2006-2016) and a two-time NBA Champion with the Miami Heat (2012, 2013). In 13 NBA seasons, he averaged 19.2 points and 8.5 rebounds per game. Drafted by the Toronto Raptors, he was a member of the NBA All-Rookie Team in 2004. As a collegiate athlete at Georgia Tech, Bosh earned ACC Rookie of the Year in 2003. As a high school standout in 2002, Bosh was named Texas Mr. Basketball and a McDonald’s All-American, while leading Lincoln High to a state and national championship with a 40-0 record. On the international stage, Bosh won an Olympic gold medal in 2008.

BILL RUSSELL [Coach] – Following the retirement of legendary Boston Celtics coach Red Auerbach in 1966, Bill Russell became the first Black head coach in the NBA. In his second season as player-coach, Russell led the Boston Celtics to the 1968 NBA championship, thus becoming the first Black head coach to win an NBA title. The following season, Russell would again lead Boston to the NBA Finals and championship, his eleventh and final ring. With the Celtics, Seattle SuperSonics and Sacramento Kings, he compiled an NBA coaching record of 341-290 (.540), with a playoff record of 34-27 (.557). As a player-coach, Russell was named the Sports Illustrated Sportsman of the Year in 1968. Russell was inducted into the Naismith Memorial Basketball Hall of Fame as a player in 1975.

YOLANDA GRIFFITH [Player] – Griffith is a seven-time WNBA All-Star (1999-2001, 2003, 2005-2007) and two-time Olympic gold medalist (2000, 2004). She led the Sacramento Monarchs to a WNBA Championship in 2005 while being named to the All-WNBA First Team and WNBA All-Defensive First Team the same year. In 1999, Griffith earned WNBA MVP and Defensive Player of the Year, while leading the league in field goals, rebounds, offensive rebounds and steals per game. Griffith was named a member of the WNBA’s All-Decade Team in 2006 and the Top 20 Players in the league’s 20-year history in 2016. She began her pro career in the ABL, earning Defensive Player of the Year and All-ABL First Team in 1998. As a student athlete at Florida Atlantic University, Griffith earned WBCA Division II Player of the Year in 1993.

VAL ACKERMAN [Contributor] – Ackerman is widely regarded as a trailblazing basketball executive and significant contributor to women’s and men’s basketball on the collegiate, professional and international level. She served as WNBA President from the league’s inception in 1996 to 2005 and USA Basketball’s first female President from 2005-2008. Since 2013, Akerman has led the BIG EAST Conference as Commissioner, launching several initiatives including BIG EAST Serves, the Digital Network, the Student-Athlete Well-Being Forum, and winning two NCAA basketball national championships. Akerman is a recipient of the John Bunn Lifetime Achievement Award (2008), the Edward Steitz Award (2013) and the Women’s Sports Foundation Billie Jean King Award (2016), as well as an enshrinee of the Women’s Basketball Hall of Fame (2011).

COTTON FITZSIMMONS [Contributor] – Recognized posthumously, Fitzsimmons was a two-time NBA Coach of the Year (1979, 1989) and is one of 15 coaches with 800 or more victories. He coached five NBA franchises, most notably the Phoenix Suns to four straight 50-win seasons. He led his teams to 12 NBA playoff appearances, including three Western Conference Finals appearances. Fitzsimmons’ Hall of Fame players include Charles Barkley, Jason Kidd, Steve Nash, Walt Bellamy, Pete Maravich, JoJo White and Artis Gilmore. Prior to the NBA, he was named Big 8 Coach of the Year, leading Kansas State to the Sweet Sixteen (1970). He also guided Moberly Junior College to two junior college national championships (1966, 1967). Fitzsimmons is an enshrinee of the Missouri Sports Hall of Fame (1981) and National Junior College Hall of Fame (1985).

HOWARD GARFINKEL [Contributor] – Honored posthumously, Garkfinkel is recognized as the Co-Founder and longtime director of Five-Star Basketball Camp, which revolutionized scouting, recruiting, and coaching development. Hall of Famers who served as Five-Star Camp Counselors include Hubie Brown, John Calipari, Bobby Knight and George Raveling. Several Five-Star alumni would also go on to be inducted into the Basketball Hall of Fame including Michael Jordan, Patrick Ewing, Chris Mullin, Isiah Thomas, Dominique Wilkins, Grant Hill and Tim Duncan. Five-Star’s drill-station style became the standard for basketball camps and countless participants went on to play in the NBA. Prior to Five-Star, Garfinkel started High School Basketball Illustrated in 1965, the first high school scouting report. He was inducted into the Collegiate Basketball Hall of Fame in 2013.

CLARENCE “FATS” JENKINS [Player] – Recognized posthumously, Jenkins was a two-sport professional athlete in both baseball and basketball in the 1920’s and 1930’s when both sports were racially segregated. A native of New York City, he played basketball for the St. Christopher's Club youth team and then for the first teams that were named "Colored Basketball World's Champions" in 1917, 1918 and 1919. Jenkins then went on to play for the New York Incorporators, the Loendi Big Five, the Commonwealth Big Five and eventually the renowned New York Renaissance where he served as team captain. The Colored Basketball World Championships were won by his team for eight straight years, even though he moved twice to three different teams. Standing at just 5’7” and 170 pounds, Jenkins was admired for his ability to remain poised and guide his team, while always aspiring for excellence.

BOB DANDRIDGE [Player] – Dandridge was a premier player of the 1970s during his 12-year professional career in the NBA. With the Milwaukee Bucks and Washington Bullets, he won NBA Championships in 1971 and 1978 respectively. Dandridge is a four-time NBA All-Star (1973, 1975, 1976, 1979). He was named to the NBA All-Rookie Team in 1970 and All-NBA Second Team and NBA All-Defensive Team in 1979. A native of Richmond, he played collegiately at Norfolk State College from 1965-69 where he averaged 22.6 points and 13 rebounds per game. In 1969, he earned several CIAA honors including All-Conference, All-Tournament and Tournament MVP while averaging 32.8 point in his senior season.

PEARL MOORE [Player] – As a four-time AIAW Small College All-American from 1975-1979 at Francis Marion College, Moore scored 4,061 points, making her the women’s college basketball all-time leader in points scored. She averaged 30 points per game and scored in double figures in all 127 college games she played. In 1979, Moore was named American Women’s Sports Foundation Small College Player of the Year, South Carolina AIAW Player of the Year and South Carolina Amateur Athlete of the Year. As a pro, she played two seasons in the WBL and was named an All-Star in 1981. Moore is an enshrinee of the South Carolina Athletic Hall of Fame (2000).

The Truth! Now, be a good example to your fans and their kids..!!

And Congrats to Bobby "The Greyhound" Dandridge!

It’s also interesting to learn about the other less heralded tho significant contributors.

There maybe other links to that game, but that was "The Paul Pierce Game".

Most of us from back than remember that to some degree or another.

It was amazing. And obviously, he didn't stop after that.

Never heard about John Bunn or Allen Kelly. Can anyone enlighten me?