Kansas guard Remy Martin gets what he needs to do to become more consistent; can he do it? 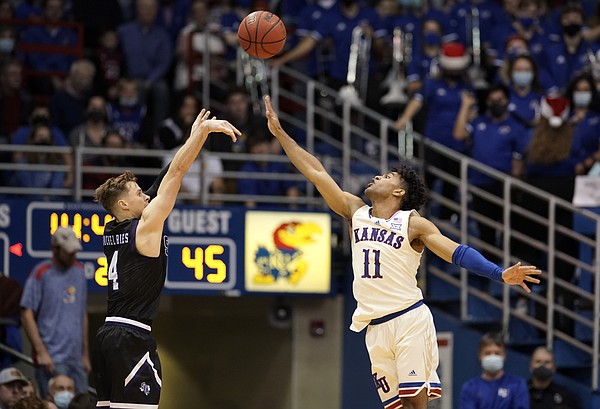 Kansas guard Remy Martin (11) defends against a three from Stephen F. Austin guard David Kachelries (4) during the second half on Saturday, Dec. 18, 2021 at Allen Fieldhouse. by Nick Krug

Up to this point, it has always seemed like the Kansas men’s basketball team had time to allow transfer guard Remy Martin to get comfortable and find his footing.

And, in many ways, he has done just that. Although he'd be the first to tell you that he has not be perfect, that adjustment time, in good moments and bad, has been used wisely.

But time is quickly running out. The tune-ups are fast disappearing and conference play is now just 12 days away. We all know that what happens during the Big 12 regular season is not the end-all, be-all of any Kansas basketball season.

But there’s also no denying that the program puts a great deal of emphasis on it, both because it’s the first opportunity to win a championship each season and because of the preparation it provides and lessons it teaches for the big tournament in March.

There will still be time throughout the 18-game Big 12 gauntlet for Martin to learn and grow. But the margin for error will be much smaller than it has been thus far. And Kansas coach Bill Self’s patience with his talented guard’s head-scratching moments and miscues figures to wear a little thinner, as well.

Martin knows that. And his comments following Saturday’s tough win over Stephen F. Austin demonstrated that getting it right and putting it all together sooner rather than later does mean something to him.

In a matter of 30 minutes, Self and Martin stepped to the postgame podium separately and said awfully similar things about Martin’s game, which featured a game-clinching 3-pointer.

Asked about his less-than-enthusiastic reaction to looking at the box score in front of him, Martin said his frustration with himself, despite the victory and big shot late, went beyond anything that was recorded on that piece of paper.

“(It’s about the) little things that I know in a game that I just have to be better at,” Martin began. “I really do. And I know that.”

The tone of Martin’s voice during the, “I really do,” portion of that comment demonstrated how much it matters to him.

Remember, this is a guy who came to Kansas for his final season of college basketball because he always dreamed of playing here and he believed he could win a national title with the Jayhawks. His desire to do right and win big cannot be questioned.

But by being asked to focus more on defending and emphasize different elements of the game than he’s used to, he’s being asked to break at least 4 years — and quite possibly as many as 8-10 years — of habits that had become second nature to him.

He’s a gambler. He’s a high-risk, high-reward ballplayer. He’s a flashy, flamboyant, fiery competitor. And for the most part, every coach or teammate he has been around for the past decade or so has absolutely loved that about him. Self loves it, too. He just wants him to be more sound and consistent while doing it. Particularly on defense.

Again, that’s something Martin understands. And if it were as simple as flipping a switch to fix it, he would have hit the darn thing back in August. It’s not, though. It takes time. And both Martin and Self have done a pretty darn good job of allowing the process to play out as naturally as possible during the past couple of months.

But now, as the Jayhawks prepare to shift to a new portion of their season following Tuesday's game at Colorado and next week's nonconference tilt versus Harvard, the expectations will change ever so slightly.

Self will expect Martin to be better and more consistent, from possession to possession and game to game. Martin, who suddenly has a maximum of just 30 games remaining in his college career, will expect the same and try like heck to make it happen.

“I’ve just got to be better on the defensive end and be smarter on some plays,” he said after the Stephen F. Austin victory. “It’s on to the next game. We won. But I’ve got to be better, making sure I’m held accountable. When I pick up the energy and play defense and do the little things, I think that helps us a lot.”

Asked on the ESPN+ broadcast after Saturday's win how important connecting with the fans on game night is to him, Martin again showed that, despite the win and the clutch shot, he still has higher expectations for himself and his game.

"It means a lot to me," he said. "I play this game with a lot of emotion. I genuinely love these fans. I love the sport. That's No. 1. I just love playing. But these fans give me some type of energy that I can't explain. I played terrible, man. I didn't like the way I played. My energy was off the first half. But seeing this, it's hard not to want to give your all to the fans and to the game itself."

Martin now has two more nonconference opportunities to do that — starting with Colorado in Boulder at 8 p.m. on Tuesday night — and then it's on to the games that matter just a little more, in Big 12 play, where Self's expectations for all of his players rise to an even higher level.

He likes playing to the crowd too much. In the flow of the game he loses concentration, especially on defense. His skills are evident, but he can have a highlight play followed by disappearing for 4-5 minutes. If, if, you can hold his attention he can be fearless driving the lane, shooting pullups, 3's, just about everything but rebounding.

He will not be able to change his stripes. No matter how many times he says he will try.

The desire to do right and win big is pretty common in most people. Recognizing what is right to do to win big is not common, and the willingness to do what is necessary to win big is really uncommon. It’s the same across sports as well as life.

Fortunately, Remy has taken at least one step in doing by choosing the submit to the tutelage of one of the masters. Some commenters seem to relegate both Coach Self and the players to their own cognition and drive. Fortunately, Coach Self knows more and many of the players have more drive than most of us can even imagine.

Ultimately, the latter, and the development of Joseph and Bobby in particular, will determine Remy’s minutes long term. How much any of them learn to execute what Coach knows will determine how long they play in March/April.

For Remy, the stakes also seem maybe a little higher. He’s someone with lofty enough dreams that he declared for the draft - but apparently wasn’t even sniffed by the league. For all his potential, the league isn’t interested. Frank would likely tell him that his height will be a liability, but would likely also tell him that if he learns from Coach Self, he can accomplish his dreams. He can indeed.

Remy is missing the will to change. Big difference. He hear's it, he see's it, he knows what he needs to change. He just can't.

What he needs is for someone to show him is that all glory is fleeting.

I will never understand Bill's approach with these 1 year guys, be them freshman or transfers.

Recruit players, bring them in, put them through the ringer for a couple of years to get them playing somewhat close to what you want them to play like; then bring in a Remy Martin, completely different player than how Kansas plays the game, ugliest jumper in the country, and he can't find his way out of the starting lineup no matter how many times he loses his guy. Would love to see KU play bigger. When you have Ochai and Braun doing what they're doing you don't need a Remy out there. Lightfoot and David could provide some halfway decent rim protection if they were allowed to play more together. Man if KJ Adams had 5 more minutes a game, he could be a real contributing player by March. Used to not be able to keep athletes like him off the floor at Kansas. He's the best athlete on the court every time he's out there. More KJ, more Mitch, lot less Remy. Looking for upside in the wrong places right now.

He passes the eye-test (flashy enthusiasm) which got him All-Pac-12 votes (AS ONE OF TEN PLAYERS), but his defense does not get wins.

Thanks. I never realized PAC12 picked 10 players for 1st Team, that makes little sense to me. Amen

Harris appears to be Self's favorite. He needs to be more than a passing guard I wonder how it would go if Remy was the point guard. Unless McCormack can't get more scoring success KU needs to concentrate on outside shooting. Big 12 this season will be tough to win as many teams are capable. Hope Self can do the right things to win.