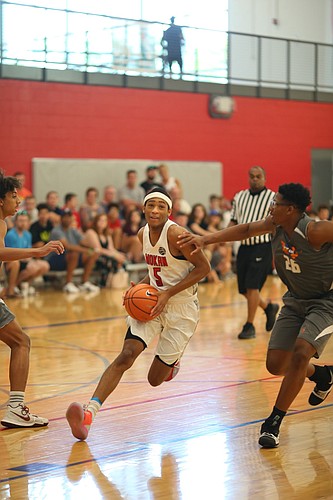 Harris, a 6-foot-1, 160-pound point guard from Columbia, Mo., who committed to KU in July and continues to work toward completing the necessary academic requirements to get to campus in time for the 2019-20 school year, went from unranked to No. 83 and from a three-star rating to four.

The jump was inevitable in the eyes of many recruiting analysts, who were predicting a spot in the Top 100 at the time Harris committed to KU.

Harris has not yet officially signed with the Jayhawks and does not appear on KU’s current roster. If he’s able to complete his academic work in time to join the roster this month, he will fill the 13th and final scholarship the KU men’s basketball program has available.

The Rise of Dajuan Harris (Official Mixtape) by Stanley Jacocks

Looks a lot like Frank Mason. Strong moves to the basket, with a soft jumper hard to defend against. It would be great to have him around for four years. He could really be a tremendous recruiting steal, like Frank and DeVonte.

He’s quite a bit taller than Frank and seems to glide more than the bulldog. Reminds me more of devonte’.

Good to also learn that he’s working on finishing classwork. Would it be possible for him to be a mid year; sort of like Silvio?