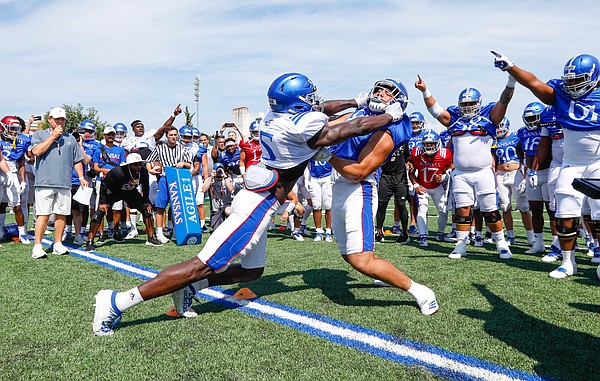 One of the best defensive linemen to play at Kansas in the past decade, Daniel Wise, a little more than a year ago, recognized real potential in one of his newest teammates.

Azur Kamara hadn’t been at KU long, after transferring in from Arizona Western College. But after a couple of weeks of preseason practices, Wise thought Kamara could eventually become an impactful player for the Jayhawks.

“He has a great frame,” Wise said of Kamara in August of 2018. “Young, a little green. But he has a great IQ for football and that helps him, with what we need from him. I’m sure when he sticks around and fills out he’ll be a true force on that edge.”

A defensive end for Kansas in 2018, Kamara played in all 12 games, started three and finished with 16 total tackles, five tackles for loss, one sack, one forced fumble, one pass breakup and one quarterback hurry.

In defensive coordinator D.J. Eliot’s scheme, though, Kamara is expected to be put in position to make even more plays from the “Jack” position, where he essentially lines up on the edge at a spot where a D-end typically would be, but plays it standing up like a linebacker.

The leading returning sackers from 2018’s defense are inside linebacker Kyron Johnson and safety Bryce Torneden, with two apiece. Kamara will spend much of the next few months rushing the passer, though, and seems to have the speed, power and size to do so effectively and secure the title of the team’s best pass rusher. Especially now that he has played in the Big 12 before and not trying to transition to a new level of football.

Said Johnson of his fellow defender: “Azur’s been here, so he’s a dude that everyone can rely and count on. He’s played D-line before, so now with him being at outside, it’s like he has that experience to get off blocks and do all that.”

Eliot, who coaches outside linebackers, too, already has praised Kamara, calling him “very talented.”

As a three-star junior college prospect in the Class of 2018, per Rivals, Kamara as a sophomore at Arizona Western recorded 15.5 tackles for loss and 12.5 sacks, as the team reached the NJCAA national title game. He’s used to making plays, and with his smarts and the benefit of a new position coach Kamara seems more likely to have a breakout season than just about any of the defense’s many unproven players up front.

We’re going to need a big year from him and the others up front. If the front 7 can provide some pressure and keep from being gashed by the run, the DBs should be very capable of limiting through the air.