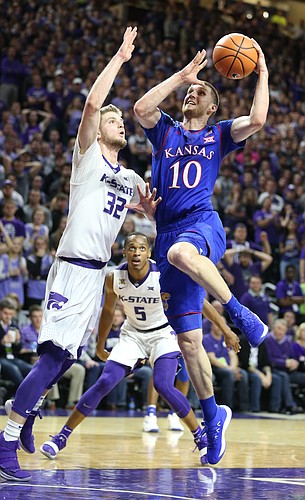 Kansas guard Sviatoslav Mykhailiuk (10) elevates to the bucket against Kansas State forward Dean Wade (32) during the first half, Monday, Jan. 29, 2018 at Bramlage Coliseum in Manhattan, Kan. by Nick Krug

The Jayhawks made 12-of-14 shots to open the game, 6-of-7 from 3-point range and raced out to a 15-point lead early and a 13-point lead at the half. KU's miserable stretch to open the second half brought this down a bit, but 46 percent for the game, 45 percent from 3-point range and 73 percent from the free throw line (not to mention a double-digit road win) easily kept it in the A range.

K-State's shooting totals are as ugly as KU's were pretty (32.3 FG, 22.2 3-point), but that was just the half of it. KU's 2-3 zone defense completely flustered Dean Wade, who could have won this game by himself the way he opened it, and Kansas competed hard on the glass to finally out-rebound an opponent for the first time in 11 games.

Give sophomore forward Mitch Lightfoot the A and sophomore center Udoka Azubuike a C. That averages out to a B and the Jayhawks have Lightfoot to thank for a relatively easy win. He played over his head a little — although efforts like Monday are becoming somewhat expected and routine — and has become a reliably consistent force for the Jayhawks inside.

Forty minutes (again) for Graham, 40 more for Malik Newman and 39 for Svi Mykhailiuk, who led the Jayhawks in scoring. Heck, even Lagerald Vick looked as aggressive as he has in a handful of games and only Marcus Garrett actually struggled in this one, playing just four minutes and picking up three first-half fouls.

Garrett and Silvio De Sousa were non-factors in six combined minutes and Sam Cunliffe showed better on the stat sheet than he did to the eye. That leaves Lightfoot, who was good enough throughout this one to bring this one up a full letter grade. His stats did not fully illustrate his importance. Not even close.

If Lightfoot can play with regularity the way that he played last night he will become the glue that holds this team together for a deep March run.

He didn't score or rebound in big bunches, but he played solid defense, moved the ball effectively, dove for loose balls, etc. He played with very few mistakes, and his back to back blocks were awesome.

With Newman's resurgence of late, Lightfoot could be the final piece of what could be a final four contender. Obviously, we need Udoka to be able to stay on the floor as many minutes as possible, but when he sits we need Lightfoot to play like he did last night.

I thought Cunliffe actually did a good job moving and jumping into passing lanes. Might consider letting up on this kid a bit. Seems like the commentary coming from LJW on him is unreasonably derogatory.