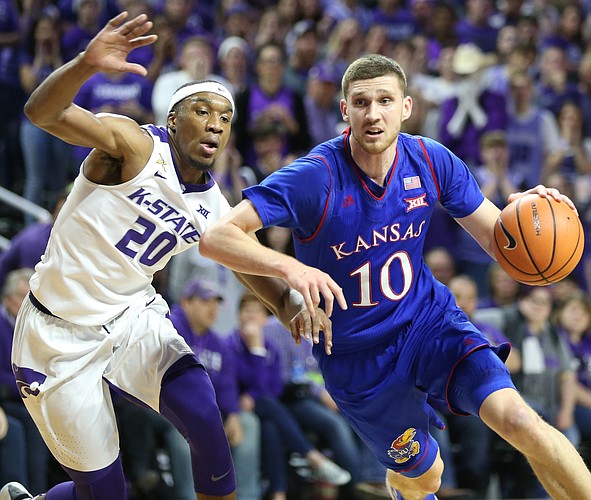 1 - Svi Mykhailiuk: So many times when Kansas needed a big bucket Svi was there with that perfect follow-through of his, swishing another 3-pointer from the corner. He produced his third consecutive 20-plus scoring effort. He made 5 of 9 3-pointers on the way to 22 points and added seven rebounds. Still needs to get better at finishing, but he will. It’s good that he’s driving more and once they start dropping with more regularity, he’ll do it even more often, becoming even harder to guard.

2 - Devonte’ Graham: Willed his way to 16 points and 11 assists with three rebounds and three turnovers. Made 2 of 5 3-pointers and 1 of 5 from inside the arc. Made all eight free throws.

3 - Malik Newman: He is responsible for getting back on defense or there is no telling how many rebounds he could get. As it is he’ll have to settle for being a surprisingly terrific defensive rebounder. In his career first double-double, Newman totaled 13 points and 10 rebounds. No other player in the game totaled more than eight rebounds. Is averaging 18 points, 7.3 rebounds and 37.3 minutes in the past four games.

4 - Mitch Lightfoot: Played awfully well for a guy who didn’t score a point. Dennis Rodman would be proud of the game he played. He didn’t take a shot, blocked three shots, took a big charge and picked up five rebounds, three on the offensive glass.

6 - Udoka Azubuike: A non-factor in a game that figured to be one in which he could dominate down low. Totaled six points, three rebounds, three turnovers and three fouls in 18 minutes. Missed his first three free throws and made his last two.

7 - Marcus Garrett: Committed three fouls in two first-half minutes and played four minutes on the night, turning it over once.

8 - Sam Cunliffe: Foul trouble for Vick and Garrett enabled Cunliffe to play six first-half minutes. He didn’t look comfortable. He spaced out with the ball near the right corner, forgetting he already had dribbled and dribbled again. A referee was standing right next to him. Turnover. He also air-balled a wide-open 3-pointer from the left corner. He did make a shot inside to punctuate a 1-on-3 drive to the hoop.

9 - Silvio De Sousa: Azubuike and Lightfoot both picked up two first-half fouls, which created an opportunity for him. After watching De Sousa set a pick, roll to the hoop and forget to look for the pass from Graham as the ball trickled out of bounds, and then losing Dean Wade for a 3-pointer, coach Bill Self had seen enough in two minutes to know that he had to put Lightfoot back in the game.

How does Garrett getting 3 fouls in like 3 minutes put him above Sam? I know Sam was a little nervous but did have a good Euro step layup, 2 Rbs, and 1 Assist.

Cunliffe was a mess.

Even with Cunliffe's nerves, Garrett played horrible. Sorry, no way he ranks in front of Cunliffe.

It appears to me that Cunliffe still suffers from game time jitters. Only way to get rid of those is playing time. Example: Svi Mykhailiuk.

Wow. Put Cumliffe out on the floor in a hostile environment, when he RARELY plays--I thought he actually did great, considering. He looked smooth on the most difficult play, his drive to the basket in traffic. I was amazed by that. His double dribble and air-ball were from lack of playing time, not lack of ability. Give the guy a chance.

No offense, Sam. I meant Cunliffe!

Mitch Lightfoot is coming on strong people! Proud of what a hard worker he is and the fact that he does what is necessary to WIN GAMES!

I also think Cunliffe needs more time on the floor, but it is really hard to argue to take Devonte, Svi, Lagerald or Malik off of the floor. 10 minutes a game? Maybe ...