Why KU freshman Josh Jackson wears No. 11 and how he got it 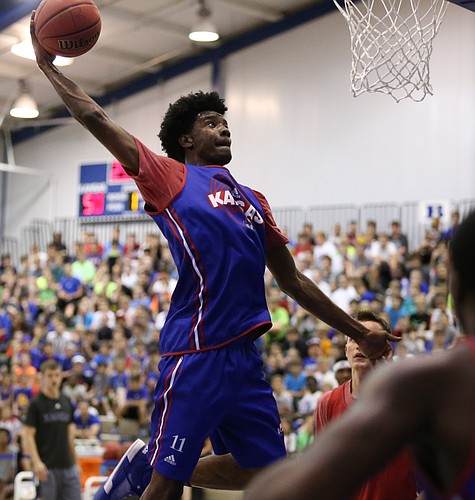 Blue Team guard Josh Jackson comes in for a dunk. by Nick Krug

If you’re like most fans, you occasionally find yourself wondering why some of your favorite athletes wear the numbers they wear.

It’s pretty much automatic to assume that a basketball player wearing No. 23 is doing so to honor Michael Jordan, even if that’s not the case. And there are certainly other numbers that trigger immediate thoughts of legendary athletes who wore that number once upon a time. Magic Johnson and No. 32. John Elway and No. 7. George Brett and No. 5. The list goes on and on.

It’s not always the case, of course, but before you can even begin to wonder what the reason is, the names and visions of those former greats often flood your mind.

That brings us to the current Kansas men’s basketball team, which will feature a strong group of returning veterans and one newcomer who comes with as much hype as just about anybody in college basketball.

We learned a few weeks back that freshman Josh Jackson would wear No. 11 and that senior Tyler Self, the former No. 11, would give up the jersey and switch to No. 20.

I haven’t heard yet why Self chose 20 — although someone did point out to me that his dad wore No. 20 at Oklahoma State, so that's as good of a guess as any — but I recently was able to find out why Jackson wanted No. 11.

Jamal Crawford? Not exactly the Isaiah Thomas answer I was expecting to hear.

Although Crawford, now in his 18th NBA season with his seventh different pro team, hails from Seattle and, therefore did not play anywhere near Jackson’s hometown of Detroit, there is a connection. Crawford played his college ball at Michigan and was a lottery pick in the 2000 NBA Draft. Although Jackson still would have been too young to truly follow Crawford’s Wolverines career, the 6-foot-5 guard is still talked about in Ann Arbor and it’s safe to assume that Jackson at least grew up hearing about him.

The love for No. 11 goes beyond Crawford’s time at Michigan, though. Jackson said he has long been a fan of Crawford’s pro game, as well.

“Just the way he plays,” he said. “He’s really exciting and, when he’s got the ball, there’s no telling what he’s about to. He’s so unpredictable.”

What was not predictable was the manner in which Jackson went about acquiring No. 11 from Self.

“I had to ask,” Jackson said with a grin.

After asking, though, KU’s latest likely one-and-done standout got no resistance from Self, who gladly offered to change jerseys for his final season on his dad’s squad.

“I do owe him dinner,” Jackson revealed. “But he was all right with it and let me go ahead and get it. He’d known I’ve been wearing this number for the past four years now, so he let me have it.”

Tyler Self is a class act.

I have no doubt that TS is a class guy, but let's face it, there was only one answer here for the walk on coaches boy; hand it over son.......Question. Would it have been classier for JJ to not ask for another players number? Just a question folks, not calling anyone out here because I also believe JJ is a class dude. Just raising the point regardless of the names. Thoughts?

Nothing wrong with asking. It's a lot better than coming in and assuming Tyler would just guve up the number without being prompted to.

Just answered my own question. Yes, he did wear #11 in high school and in the McDonald's All-American game. So, it was the right thing for Tyler to do to let him have his number.

Just realized, retiring jerseys has taken on a new dynamic with the early departures of players. Future generations will not appreciate the contributions that these One/Done players made or could have made as they look up at those jerseys hanging in the rafters. But, four-year players will have to really shine in order to have their jerseys hoisted.

That request must have unleashed some interesting dynamics. Tyler, tell Josh you'd like him to wait on buying you that dinner until next summer. You might get a really nice one in Chicago come June.

Yeah, right now all he's got are Apples and Peaches.