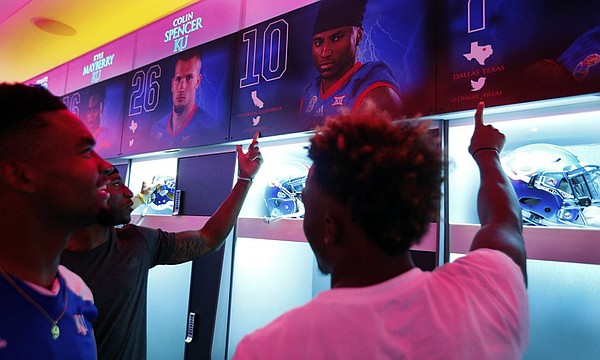 Just in time for the first game week of the season, Kansas football players on Sunday evening got to check out the team’s refurbished locker room for the first time.

Throughout preseason camp, the Jayhawks had to stay out of the space on the ground floor of Anderson Family Football Complex as the project reached completion. During that time, players instead used a renovated but old room underneath Memorial Stadium that coach David Beaty said “didn’t have a whole lot of ventilation.”

“I guess the word ripe comes to mind in terms of the way that room smelled,” Beaty said. “So I think they were looking for some relief from that, as well.”

KU’s second-year head coach thought the Jayhawks benefited from experiencing the past few weeks of practices, including some two-a-days sessions, in a less than desirable setting before introducing them to their freshly revamped, state-of-the-art locker room.

“But I think that allowed us to understand that’s not gonna make or break you. When we were able to walk into that room (Sunday night), I think the appreciation level was extremely high,” Beaty said. “You could tell just a sense of energy infused into our guys as they walked in there.”

The old locker room, built in 2008, received more than $2 million worth of upgrades, courtesy of KU football donors.

A KU spokesperson said the overhaul isn’t quite totally complete, but the improved area will feature a new layout, redesigned lockers personalized for each player, an updated sound system and an illuminated Jayhawk on the ceiling.

Since Beaty took over the program, he said the players have done everything the coaches have asked of them. Rewarding them with a revamped facility, he added, helps keep the Jayhawks’ focus on the team’s “stakeholders,” as the players try to give the fans a team that will make them proud.

“It was a pleasure to be able to open those doors (Sunday) and let those guys know how much they’re appreciated,” Beaty said, “and really being able to reinforce the fact that people care about them here and there is a commitment to football.”

Tonight we officially unveiled the new locker room to the team! Big thanks to the generosity of our donors! #kufballhttps://t.co/ndPAwboJMX

In a video of the players’ first steps inside their cutting-edge locker room, posted by KU Athletics, the Jayhawks show off some of their favorite parts of their new home. A placard above each stall features every player’s picture, name, number, hometown and Twitter handle. Each locker has spaces equipped to charge their phones and special filtered compartments to air out their cleats, shoes and shoulder pads.

“This is insane,” junior linebacker Joe Dineen said in the video. “This is a lot nicer than I expected it to be. A lot of room. Even like the little gadgets inside the locker are just insane.”

Dineen said the Jayhawks also got to have lunch with the donors who made the renovation possible.

Senior safety Fish Smithson said KU’s players lounge now probably ranks as one of the best in the country.

“This definitely helps out recruiting a lot,” Smithson said in the video, “’cause you know kids these days, they want to see what makes your program different.”

Take a tour of our new locker room with Fish, Ryan, Joe and Montell#RockChalkhttps://t.co/giwLBTi2lo

Is there a limit to the size of the roster because of locker space.

Just pay the players already. They almost sound like escorts. Give the players something shiny, they meet the people who paid for the new digs, and those people give money to the pimp, sorry, university.

Someday the players will figure this out and strike.