The Day After: Slapped by the Cyclones 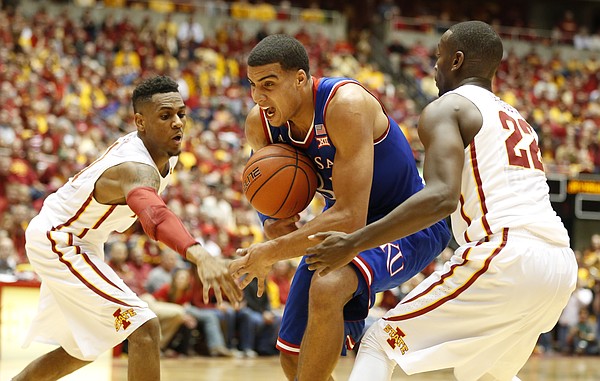 Kansas forward Landen Lucas (33) loses the ball as it is stripped by Iowa State forward Dustin Hogue (22) and guard Monte Morris (11) during the first half on Saturday, Jan. 17, 2015 at Hilton Coliseum. by Nick Krug

With College Gameday in the building and hype around the game growing throughout the week, Iowa State answered the challenge of welcoming the Kansas men's basketball team to town in a big way and in convincing fashion.

The game, although no doubt a thrill for the home fans, did not quite live up to its billing as a clash of Top 15 teams — two of the best in the Big 12 — particularly because neither team played all that well. Iowa State was solid in the second half and had plenty of moments where it looked like a force to be reckoned with. But the Cyclones also had plenty of moments where they looked less than stellar like the Jayhawks, most notably with a few late turnovers and several missed free throws.

Iowa State and its fans waited all day and night for a chance to show the nation that it was capable of beating mighty Kansas. And then the Cyclones went out and did it.

After a back-and-forth first half that ended with ISU leading by three, the Cyclones (13-3 overall, 3-1 Big 12) jumped out to a nine-point lead early in the second half and never looked back.

Iowa State built second-half leads of 12, 14 and 12 again and watched Kansas (14-3, 3-1) scratch and claw its way back into striking distance each time. But the home team, backed by its rockin' and rowdy arena, answered every KU run right down to the wire and sent KU home with plenty of questions to answer. 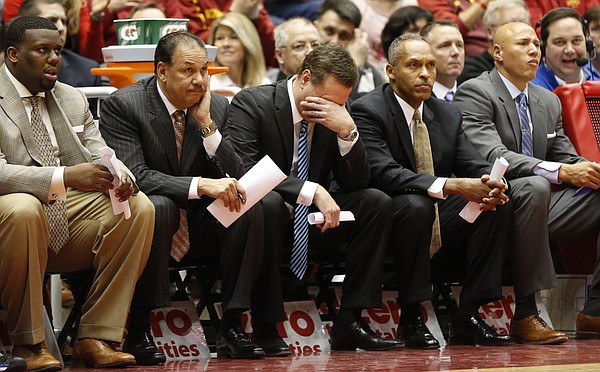 Kansas head coach Bill Self, center, and his coaching staff show frustration with a Jayhawk turnover during the second half on Saturday, Jan. 17, 2015 at Hilton Coliseum. by Nick Krug

Saturday's loss by Kansas makes the Big 12 Conference race interesting again and it should have come as no surprise. Iowa State was angry and is always hungry to knock off the Jayhawks no matter where they play. It wasn't so much the loss that should be a concern for KU as it was the way it came. Kansas got very little production and passion from anyone not named Perry Ellis and Frank Mason and again struggled defensively and with a lack of quality depth. It's just one loss and it came on the road in an environment that hardly any team has success in, so the key for Kansas now is to move forward and respond to Saturday's setback with an inspired effort against a tough Oklahoma team tomorrow night. If they don't, the Jayhawks could be entering a stretch — at Iowa State, OU Monday, at Texas on Saturday — that could put their quest for Big 12 title No. 11 in a row in danger.

1 – You have to give KU credit for fighting to the end. The Jayhawks hit a couple of late three-pointers, forced a couple of turnovers inside the final minute and actually got what once was a late, 14-point ISU lead down to three in the final seconds. At no point did it seem like Iowa State had lost control of the game, but it was good to see KU not mail it in, especially given the fact that you know the Jayhawks were disappointed with how they played and the outcome. 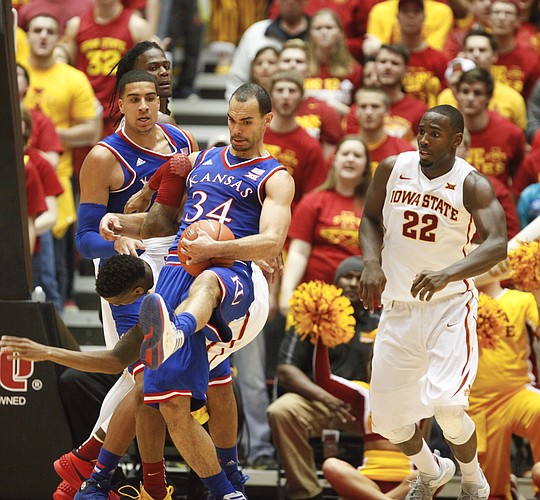 2 – Forget what you might have read or seen on Twitter, Perry Ellis played a very solid game. He put up numbers — 19 points, 11 rebounds on 7-of-14 shooting, including 2-of-3 from three-point range — and he played hard. About the only down part of Ellis' game was the fact that he had to sit for most of the first half after picking up two fouls seven minutes into the game. Self said the fouls weren't really Ellis' fault and Ellis said having to sit really took him out of the flow. By the time he was back on the floor, it took him a couple of minutes to get going again, but once he did, he scored and competed on just about every trip, even if the outcomes of each possession didn't always show it. In Ellis' last three games against Iowa State, dating back to last season, the KU junior is 26-of-38 from the field (68 percent), and is averaging 23 points and 8 rebounds per game. For his career, Ellis owns a 15.7-point average in seven games against Iowa State. 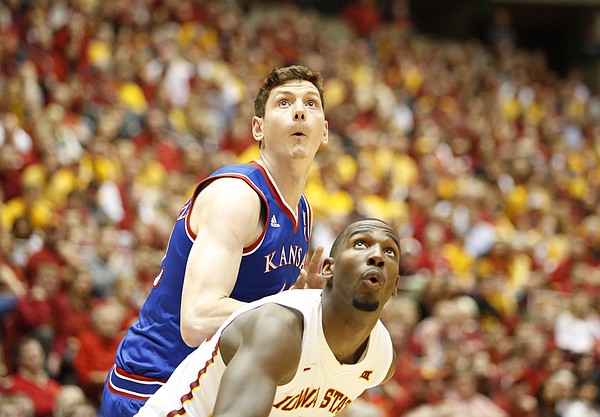 Kansas forward Hunter Mickelson and Iowa State forward Dustin Hogue await a rebound during the second half on Saturday, Jan. 17, 2015 at Hilton Coliseum. by Nick Krug

3 – Kansas did well on the glass — particularly the offensive boards where they grabbed 15 to 5 for the Cyclones — and kept the Cyclones from getting too many second chances, particularly on the 11 free throws ISU missed. But a big reason Iowa State did not get more offensive boards was that the home team shot 59 percent in the second half and rarely needed to crash the glass with passion because of their hot shooting and big leads. Still, give KU credit for owning a 44-33 advantage on the boards. Had the Jayhawks not, this one easily could have been another double-digit loss.

1 – The first and most obvious shortcoming in this one for KU was transition defense. The Cyclones often looked like a high school track team competing against track athletes from the local middle school and took full advantage of the edge that gave them. The stat sheet said ISU poured in 21 transition points but Self said the KU bench had it at 27. Most of those were easy layups or dunks right at the rim and came when KU either failed to get back on defense or simply did not have a presence at the rim when it did. The Cyclones became just the second team this season — and just the 12th team in the past 273 games — to shoot better than 50 percent (50.8) against a KU defense. 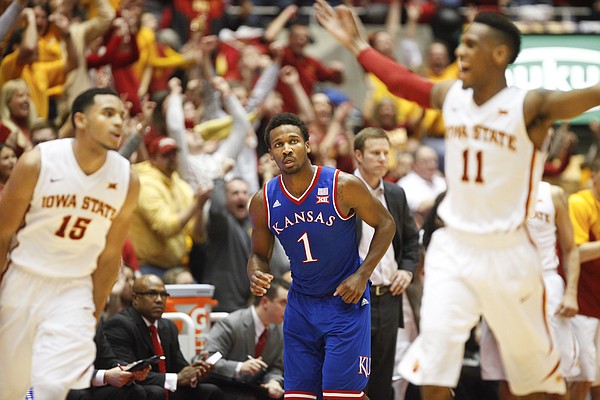 Kansas guard Wayne Selden Jr. (1) casts a stunned expression as Iowa State players and fans celebrate a three by the Cyclones during the second half on Saturday, Jan. 17, 2015 at Hilton Coliseum. by Nick Krug

2 – KU did not shoot its first free throw until the 10:35 mark of the second half. Part of that was because of the way Iowa State played and the fact that the refs really let things flow, but given the fact that KU made 8 of 10 free throws by game's end, you can't help but wonder what would've happened if KU forced the action inside a little more and got to the line earlier. The Jayhawks went to the post on the first two possessions of the game but came up empty both times. The Jayhawks, at times, are really missing that guy like Andrew Wiggins (obviously) who could drive to the rim on just about any possession and wind up standing at the free throw line.

3 – You can't help but be concerned about what's going on with Cliff Alexander right now. All that talent, all that energy, all that potential and yet he played 14 minutes in this game while Landen Lucas labored for 19. Self said he was not pleased with Alexander's motor, particularly defensively, and, to Self's credit, he does not appear to be willing to give in to sub-par effort just to get his best players on the floor. That could wind up hurting this team, but it won't be Self's fault if it does. Nothing has changed during his time at Kansas and he's never made the recipe to playing time a secret: If you want to get on the court, play hard and play D. This is where the Jayhawks are lacking leadership from someone on the floor. Self can only send so many messages and call Alexander out so many times. At some point, it's up to the players on the roster to get the big guy to understand and buy in. 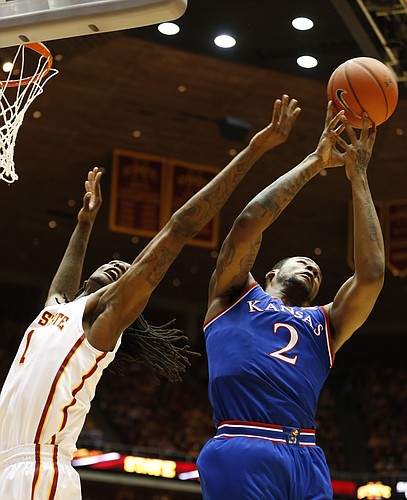 Kansas forward Cliff Alexander (2) fights for a rebound with Iowa State forward Jameel McKay (1) during the first half on Saturday, Jan. 17, 2015 at Hilton Coliseum. by Nick Krug

• Dropped KU's record to 2-2 in true road games this season and 6-3 in games played away from Allen Fieldhouse.

The Jayhawks return home for yet another huge Big 12 Conference match-up when the Oklahoma Sooners come to Allen Fieldhouse on Monday night for an 8 p.m. Big Monday match-up. 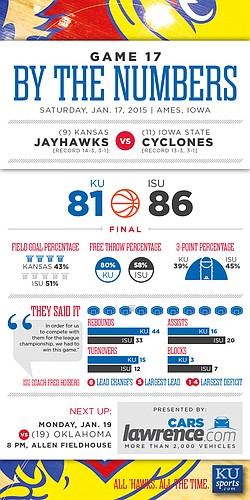 I hope Tait doesnt succumb to it, and I doubt he will, as he has been around long enough to be 'aware' of Self's patterns and coaching tendencies. By "it", I mean several fan comments suggesting Self doesnt know what he is doing by benching Alexander.

How many unguarded 3s do we need to see as fans, before we recognize after yrs and yrs of watching Self, that such non-defense is simply unacceptable to him, as is non-hustle.

Matt -- I don't disagree with your comments about Perry. I'm just surprised by his box score. When he fouled out, we looked up to the scoreboard and were floored that he had 19 points -- didn't even know he had 11 rebounds until after the game when we could look up his stats on the phone. During the game, it just didn't seem like he was that productive. All I could remember was that he missed so many shots inside.

Any chance there was a Melvin Weatherwax siting at the game? Couldn't tell from nosebleed seating.