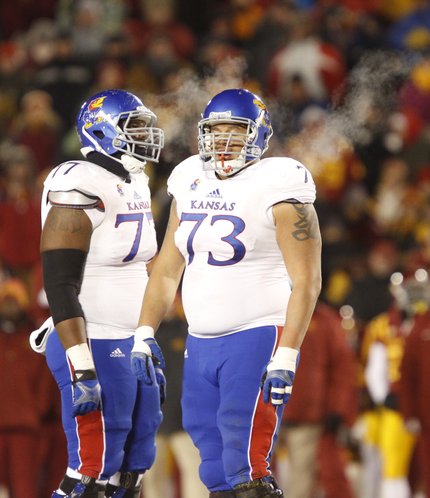 Kansas offensive lineman Aslam Sterling (77) and Damon Martin (73) bemoan a missed first down attempt by the Jayhawks against Iowa State during the second quarter on Saturday, Nov. 23, 2013 at Jack Trice Stadium in Ames, Iowa. by Nick Krug

After cruising through a couple of seasons as an under-the-radar talent with tremendous potential, the time has arrived for Martin to become the man.

With so many older, more established lineman playing ahead of him during the past couple of years, it's easy to see how Martin could have just blended in. He had some good moments, started a few games and always was one the coaching staff pointed to as a guy who could become a player. If he's able to do that this year, it will do wonders for the Jayhawks' offenseive line as a whole.

Up until the arrival of spring ball, Martin had spent his career playing guard. However, with the KU O-Line facing a more pressing need at the tackle positions, Martin was bounced outside and spent the entire spring playing right tackle.

Seems like a good fit to me. The 6-foot-3, 305-pound Arlington, Texas native is definitely big enough and strong enough to handle edge rushers. And we've talked for a while about how he always seemed to have the kind of build that lent itself to being good with his feet. While those three factors are crucial for tackles, Martin is still learning a new position and there's no question there could be growing pains.

There are a couple of reasons to believe Martin will succeed at his new spot. First, he's comfortable on the right side already, having started the final four games of 2013 at right guard. Second, he's not going to be overwhelmed when he gets out there because he's seen it all before. His first career start came at Oklahoma in 2012 and he has played in 13 games during the past two seasons, the natural progression for a guy who red-shirted in 2011.

Getting a jump on the shift from guard to tackle in the spring surely helped, but how well Martin handles his new role remains one of the bigger questions and more important factors in determining just how successful the Jayhawks will be this fall.

Providing he can pick up the system in time, I would expect to see Larry Mazyck to take one of the tackle spots.

Yeah. I don't think there's any question that Mazyck will get the first and maybe second and third cracks at that starting left tackle spot.

Oop! Gave away one of your picks.

Don’t know much about the Mazyck kid. Can’t wait to hear the breakdown.

Is he why Fondal might be leaving the team?