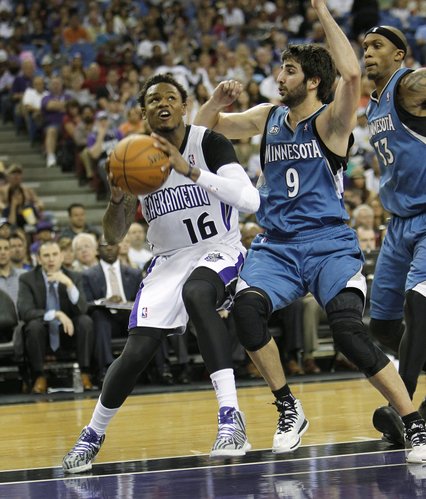 Sacramento Kings guard Ben McLemore (16) drives the the basket against Minnesota Timberwolves guard Ricky Rubio (9) during the second half of an NBA basketball game in Sacramento, Calif., on Sunday, April 13, 2014. The Kings won 106-103.(AP Photo/Steve Yeater)

No NBA rookie comes into the league and figures everything out in the span of 82 games. But some assimilate faster than others.

Kansas University lottery picks Andrew Wiggins and Joel Embiid will find that out soon enough. For proof, they could just examine the still young career of another Jayhawk.

A look at McLemore's shot chart from his rookie season reveals there were really only a handful of spots the Kings would want him shooting from — either corner for three-pointers and inside the arc on the left wing. 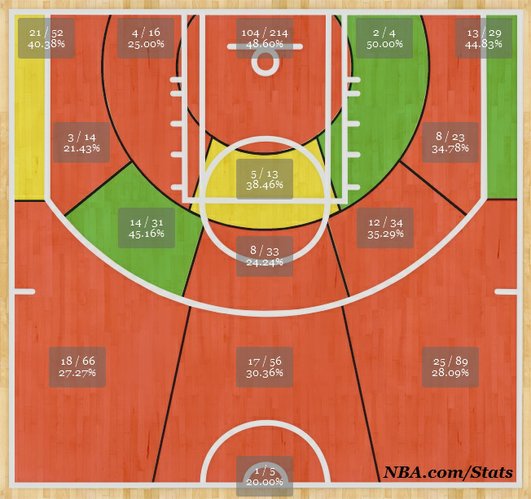 Just about every other spot on the floor yielded little returns for the first-year guard out of KU.

After two games in Las Vegas, though, McLemore had converted just six of his 18 shots.

In the Kings' third Vegas game, Monday against the D-League Select team, McLemore finally found his stroke. The athletic young guard went 7-for-10 from the floor, 3-for-4 from the foul line, made one of his two three-pointers and finished with 18 points and six rebounds.

"My first two games, I was just too anxious," McLemore said in a video interview posted by News10, in Sacramento. "You know, not letting the game try to come to me and not playing my game."

His next time out? Even better.

McLemore continues to look much improved over the course of summer league. He's got 22 points, 6 rebounds and 3 assists.

None by Jason Jones

McLemore led the Kings with 22 points Thursday in a win against Minnesota, knocking down 7 of 11 shots — including 2 of 4 from three-point land — while converting all six of his free throws, dishing four assists and grabbing six boards.

He knows the kinks need to be addressed now if he wants to help keep Sacramento afloat in the highly competitive Western Conference during the regular season.

On an episode of his podcast, the B.S. Report, Simmons asked Cousins about "what's up" with McLemore after his "typical rookie" season. Cousins quickly spoke up for his teammate.

Simmons suggested there weren't a lot of shots to go around in Sacramento last season for role players such as McLemore — what with Boogie, Rudy Gay and Isaiah Thomas all averaging 20-plus points on the season — and Cousins agreed. But the Kings let point guard Thomas sign with Phoenix this summer and replaced him by picking up Darren Collison. So McLemore could have more opportunities in his second year — if rookie Nik Stauskas, from Michigan, doesn't beat him out for a spot in the starting lineup.

"That's like my little brother," Cousins said of the incumbent. "One thing about Ben, he works his tail off. With that alone, he's gonna be fine. I believe he'll have a better season this year."

The Sacramento big man predicted the Kings (28-54 in 2013-14) would break through and make the playoffs next season.

"You need your little brother, McLemore, to step up."