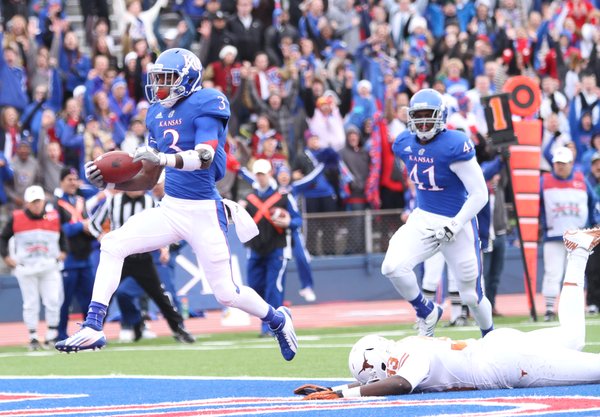 Kansas receiver Tony Pierson leaps into the endzone as he leaves Texas linebacker Steve Edmond on the turf during the second quarter on Saturday, Oct. 27, 2012 at Memorial Stadium. by Nick Krug

The other day I came across a blog from ESPN.com's Big 12 football blogger, David Ubben, that was titled, ”The Big 12's most improved players of 2012.”

Naturally, my first thought was something along the lines of, “Huh, I wonder if any Jayhawks made the list.”

Now usually when that happens the answer is no and, when I read through whatever blog or article it is, I always find myself shaking my head as if to tell myself, of course not.

With this particular instance, the only guy who came to mind that I thought could be on the list was KU running back James Sims. After all, Sims, who had been solid during his first two seasons in town, took a major step forward in 2012 and became one of the best backs in the Big 12. In addition, I remembered that Ubben had put Sims on his first-team all-Big 12 squad so I knew there was a chance that the junior from Irving, Texas, would be on the list.

It turns out there was a Jayhawk on the list but it was not Sims. Evidently, Ubben had enough respect for Sims' game heading into the season that he did not see the need to include him on his list of most improved players.

So who made it? Another KU running back. Sophomore Tony Pierson, who made a big-time jump from serviceable player to serious weapon during his second season in Lawrence.

Here's what Ubben had to say about Pierson:

Tony Pierson, RB, Kansas: Pierson was a great complement to power back James Sims, and ranked 10th in the league with 760 yards on just 117 carries. While Sims was suspended to begin the season, he had a pair of 120-yard games and topped 200 yards against Texas Tech, but his yards per carry (6.5) gets him on this list. Among the 25 Big 12 backs with at least 75 carries this year, only Seastrunk had a higher yards-per-carry average.

Because of their poor record and a couple of lopsided losses, the Jayhawks don't always get respect from the national pundits, but I've always found Ubben to be a guy who looks beyond the obvious and really tries to identify the best of the best in the league he covers.

I think he nailed it here.

Here's a quick look at a couple other recent Ubben blogs, one that mentions KU and one that doesn't but is still interesting.

The first outlined his top Big 12 storylines of the offseason. A Kansas angle came in at No. 5 on the list.

5.Charlie Weis' juco revolution. Weis has made it clear that he wants quick fixes and to win now at KU. Will his juco recruiting haul do it? Defensive lineman Marquel Combs was the nation's No. 1 juco recruit, and Weis has done a heck of a job selling immediate playing time to these guys. The current recruiting class has 17 juco transfers among 25 commits. Will it pay off, and how will these guys look once they get on campus? Are wins just around the corner?

The second is a quick and interesting look at the number and type of reviews by Big 12 officials during the 2012 season.

Granted, there weren't very many replays — if any — that made much of an impact on KU games this year, but this is still interesting nonetheless. It gives you a real feel for how the conference's referees performed on the field.

I wish the refs would review the last 2 mins of the Texas game a few times. I still have a list of issues that come to mind when I think about that game, same with (2006 by the way)

I think Ben Heeney has improved more than Peirson.

Good point. I hadn't thought about that, but you could be right. Both guys probably have a legitimate case, but you can understand how it would tough for Ubben to put two guys from a 1-11 squad on the list.

Unfortunately, look for Ben to miss a few games early in the season due to the recent faux pas. Yes, he has improved, but I wouldn't put him ahead of Pierson due to the off-the-field stuff.

I still think he should've been on this list because he's improved more than Peirson has since the end of the 2011/12 season.

Is it just me or does that Texas defender in the photo look more defeated than just whiffing on trying to tackle Pierson?

He looks more like he just gave up on life after whiffing on Pierson. LOL

As a freshman, Pierson sometimes almost looked a little afraid on the field. Don't get me wrong, with his frame, I think that he should avoid big hits whenever possible - but as a sophomore he was clearly not as afraid of contact.

The backfield will be the best in the Big 12 next year.

Absolutely the best backfield. Also the best running back (Sims), best new QB, and the best coach in college football (only one with 3 Super Bowl rings). It's going to be a great year.

So correct me if I'm wrong but I count at the bare minimum, 7 Superbowl champion rings + 2 NCAA champ rings on KU's staff.

Wow, you've got the cart way before the horse. Let these kids develop and prove themselves. That was a large part of the problem last year in expecting way more from the transfers than they were capable of producing.

I wish CW could trade those Super Bowl rings for National Championship rings here at KU. That just isn't how it works.

Crystal - I can appreciate your enthusiasm, but "the best coach in college football" ???

I'm pulling for Coach Weis, I like some of the things he says, seems like he's a good recruiter, - BUT - I don't care how much jewelry he has - he's not even close to being the best coach in college football..

I still miss Darrian Miller, he was elusive and exciting to watch. Don't get me wrong though, i love me some 1-2 punch of Sims and Pierson.....

Where did Miller end up?

Photo got me thinking about the parallels between the KU UT Football game this year and the first Bball game. Basically the exact same game with the tables turned.

Are we really getting new Nike jerseys? Anyone know?

I can't imagine they would announce that until after BB, which would be the end of the significant portion of Adidas' big marketing season.

I must say I wondered why Weiss didn't put some sort of stamp on the uniforms last year. Is the Addidas contract ending?

Is there any truth to the rumors that Weis might be bringing in some more 5th year transfers from Notre Dame for the upcoming season? Several reports have TE Jake Golic, DT Tyler Stockton, K Nick Tausch, and/or S Jamoris Slaughter as being interested in coming to KU. Do you have any insight into this?