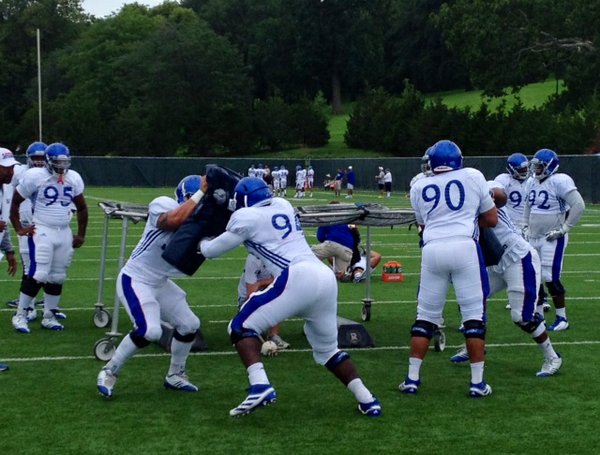 Another early practice came with another batch of serious energy from the Kansas University football squad.

Thursday morning's first session marked the beginning of the second day of two-a-days for the Jayhawks this month and, maybe it's the cooler weather or maybe it's their hunger to prove people wrong, but the early wake-up call and looming long day has done nothing to zap the spirits of these guys.

During the time we were allowed to watch practice, I saw more than a dozen guys really bringing it in terms of energy. Some were doing that physically, with their performance during drills and from station to station and others were doing that vocally, shouting encouragement and instructions whenever they thought the intensity was dipping.

Senior defensive tackle Kevin Young was probably the most notable guy in the vocal department. During one D-Line drill, Young seemed to sense that his guys were just going through the motions and, rather than looking the other way, he spoke up.

“We're out here,” Young barked. “We might as well have fun.”

Immediately, the energy of the entire group perked up, as guys started screaming and hollering and going a littl harder.

Here's a quick look at what else caught my eye this morning:

• The other day, I noted that Ty McKinney looked a little sluggish. That was not the case today. Not at all. McKinney may have had the most energy of anybody I saw out there today. His juice and excitement during stretching and warm-ups carried over into the drills and even though he wasn't the fastest or the smoothest dude during the drills he definitely looked like the one giving it max effort. Good to see. I talked to him yesterday and he said he felt great and that things had been going great for him and he was starting to feel very comfortable. The guy's a load and if he's in good shape and picking things up at a good pace, he'll definitely help the D-Line this year and could emerge as a major factor. 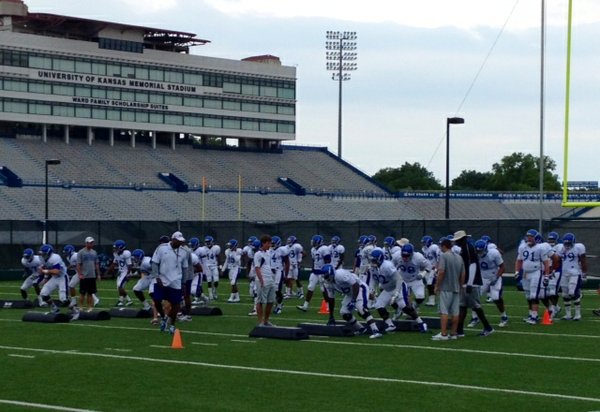 • It might have been because I just talked to them all yesterday, but I found myself pulled to the D-Line today. Luckily, there's a lot to watch there. For the first few minutes I was over there, I zeroed in on Keba Agostinho and I have to admit he looked like a different player. Both he and Kevin Young look much more explosive and also seem to have improved their footwork a great deal. It's hard to say exactly what their roles will be this season, but if those two are regular contributors and can make a legit impact, it stands to be one of the cooler stories of the season.

• Granted, it was only a couple of drills, but former walk-on Shane Smith received a lot of love from D-Line coach Buddy Wyatt while I was out there. Makes sense to me. Smith's a hard-working, no-frills kind of guy and, even if he doesn't play a down, he still has a great deal of pride and desire to be the best he can be and do things the right way. There are a ton of guys on the depth chart ahead of him, so it would be really easy for a guy like Smith to just half-ass it. But he doesn't. Ever. That's a major credit to him and I gotta think that could at least land him some kind of role on special teams.

• Finally, I got a closer look at Andrew Bolton today and the potential is obvious. The guy is an athletic specimen and, even while recovering from the knee injury he suffered during his last season of juco ball, you can tell that he's the real deal. Listed at 6-3, 280, Bolton's explosiveness measures off the charts, as proven by the fact that while doing a leverage drill under a four-foot high platform, Bolton was the only one in the D-Line group who consistently banged his helmet off the bar while exploding out of his stance. As mentioned in this article, he's got some rust to shake off but you can see the potential for something special is there.

Matt, I am enjoying the coverage of defensive progress, given that is the area of much need, influx and change. Of what you have seen, how are the guys conforming to the new linebacking scheme and to the institution of a nickel package as a whole? Likewise, has Jake been throwing and if so, does he appear to be the same Jake from spring or has he grown even more (beyond your numerous articles regarding how he has taken a strong role in leadership)? Given your limited viewing opportunities and our chance to see them for ourselves Saturday, I will guess information is still somewhat diluted.

Matt, as a whole, how does the squad look compared to last year? Execution, athleticism, energy, etc...

I might also ask, how much will Campo on the field change defensive responses such as audibles and the like.

I don't think having Campo on the field will be a negative in any way. If anything, having Bowen, Campo and Wyatt all down there together will make it easier than when they were trying to communicate from the box and the field.

As for how they look, I'll say much better. Not only are they in better physical shape and condition, but they also appear to be going harder and wasting no time out there.

How much that will translate into good things on the field come September is hard to gauge, but they do seem to be working their butts off.

Matt, Has the team had any more of the "Chant" sessions ala Samson Faifili that you showed on video a few days ago? I caught a two minute video on Rival's Jayhawk Slant with a better angle and better sound. You should take a look, and, turn up the volume. It is enough to turn anybody on. I don't know if this works, but I copied the shortcut http://kansas.rivals.com/content.asp?CID=1534941. Otherwise, go directly to Kansas.rivals.com page and look at the videos section, bottom right.

If they've done any more, it hasn't been at the beginning of practice. Hard to tell what they're going to do with that. I'll try to ask Samson when we get linebackers next.

Nope. Completely fine and I was told he actually practiced yesterday too so it's clearly no big deal.

There was a program on PBS the other night about juvenile justice, it showed how the Maori handle juvenile offenders in New Zealand. There were several Haka dances in the program and the juvenile offenders are required to learn the dance as part of their program. You see an authentic Haka

Much better angle of the Haka in that video, thanks keithii for the link. Holsopple (I think that's Holsopple, at least) is totally into it, he can't stand still...

Matt, feel free to keep calling guys out who are just going through the motions (like McKinney). I have a feeling a member of the press calling them out publically has a bigger affect on their energy levels the next time out than if a coach calls them out. I doubt his energy surge today was just a coincidence.

Eh, maybe. It could've been a coincidence, though. We're out there for such a short time that I may have just caught a bad few minutes for McKinney the other day or maybe a good few minutes today.

Either way, I'll keep telling you what I see and my read on things and the rest will sort itself out.

FYI- Samson is a very skilled ukulele player, too. Matt- you should get him to play a song or two for the press.

Heard a little bit of it briefly today -- along with him singing -- the dude definitely has more talents than just football.

Matt, you anticiapte Kevin Short will be here this month? We obviously don't want a situation like the one we had with Ty Mckinney..

Sweet...you used the term "half-ass" in your blog. Most journalist would be too scared to use that kind of language.

Your coverage is great as always. How do you think this team will matchup with Texas Tech on homecoming? A vegas insider predicts a 5-0 KU start citing the D improvements and O-line improvements to protect Heaps and block for a world class backfield. He thinks KU is gonna roll their first 5 games...so, do you get a sense a special team is coming together?

As for 5-0, most seem to think improved O and D will do it. Don't overlook the anticipated improvement in special teams. More and better kickers, more choices on return men. Added depth at every position on the team means more choices to play roles on special teams. Think what improved field position and kicking alone could have done last year with a weak offense. Now imagine what it will do with a solid offense.