What caught my eye at Day 17 of Fall Practice 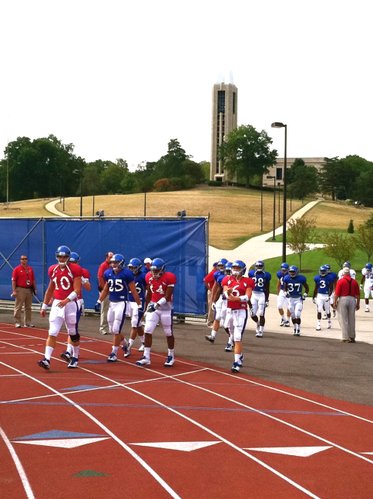 After two days of closed practices, we were back out there on Saturday morning. The practice — open to KU students with a valid student ID from 11 a.m. to 1 p.m. and to the media from 10:20-11:00 — was a lot less like an actual practice and a lot more like a dress rehearsal.

With the season opener now just two weeks away, KU coach Charlie Weis took time out to treat the beginning of Saturday’s practice as if it were gameday.

With the music blaring and the stands yet to fill up, the kickers hit the field first and began their warm-ups. Kickoffs, punts, field goal attempts, everything was done just as it would be on a Saturday during the season.

Although this kind of thing is not ground-breaking, it is critical, especially when you’re talking about a program that has a new coaching staff. Why wait until Sept. 1 to give these guys a feel for what things will be like on gamedays? Emotions run high, adrenaline is pumping and it can be tough to focus when kickoff is an hour or so away. That’s why they did the Saturday walk-through and, like everything else with Weis, the goal was for repetition and discipline now to make things run more smoothly when they count for real.

Beyond that, we didn’t see a whole lot on Saturday. By the time we left, a few students were starting to file in, but I would definitely be interested in hearing how many showed up, especially in the wake of Weis’ comedic comments from last night’s pep rally about leaving games early.

“If you’re leaving at halftime,” Weis told the large crowd at Corinth Square in Prairie Village, “You and I are going to get into a fistfight.”

Here are a few other things that caught my eye during Saturday’s walk-through.

• Several different players were working on punt and kickoff returns. Could have just been a thing for today or could be a sign that there is competition at that position, too. Veterans Daymond Patterson, D.J. Beshears and Bradley McDougald were joined by newcomers Tre Parmalee, Tyree Williams and Greg Allen. The first depth chart of the season — which we received on Aug. 1 — did not include returners, so, right now, it’s anyone’s guess as to who will be handling those duties in two weeks.

• No Ty McKinney once again. According to several people, the junior-college transfer from Trinity Valley CC in Texas is going crazy while wait for his classwork to be finalized. He has done the work and turned it in, it’s just waiting to be graded. At this point you have to feel for this guy. All he wants to do is play football and, with each day that passes, it becomes more and more unlikely that he’ll be able to play a big role on the KU defense early in the season. That’s not to say he can’t get out there, but this was a guy who had starter potential. McKinney Watch continues. Stay tuned...

• With McKinney still not on campus, a few veterans are benefiting from extra reps in practice. One guy who appears to be taking full advantage of it is Kevin Young, 6-3, 285-pound junior defensive tackle from Olathe. During drills on Saturday, Young worked with the likely first team, as defensive ends Toben Opurum and Josh Williams lined up on the outside and Keba Agostinho and Young lined up inside. The second unit also featured some quality names, which gives a great indication that the talent and depth on the D-Line is much improved. Jordan Tavai and Ben Goodman were the defensive ends who ran second and Keon Stowers and John Williams were the interior linemen. Again, this was just a drill, so it does not necessarily reflect what the depth chart looks like. But, right now, those eight guys appear to be your first two waves on the D-Line.

• Speaking of absences, a few guys were on the exercise bikes again and one guy was not at practice at all. Linebacker Anthony McDonald and safety Brian Maura were back on the bike, and they were joined by wide receiver Christian Matthews. Tight end Jimmay Mundine, who was at team pictures on Saturday morning, was not on the field for the first 40 minutes of practice. It sounds like Mundine is just dealing with some kind of flu or something and he should be fine.

• A familiar face showed up for practice on Saturday, as former KU linebacker James Holt was on hand to watch his former team. Holt, who played on KU’s Orange Bowl championship team and later with the San Diego Chargers, was a second-team all-Big 12 selection in 2008 and an honorable mention all-Big 12 pick in 2007.

• Finally, the Coach Weis song of the day was “10th Avenue Freezeout” by Bruce Springsteen. 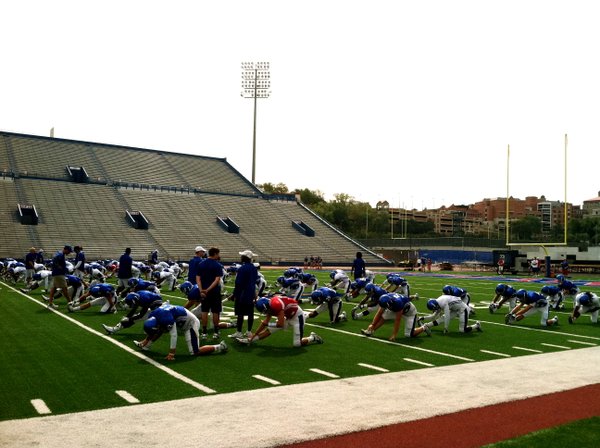 The KU football team runs through pre-game stretches just as it would on Saturdays this fall. The season opener is now just two weeks away. by Matt Tait

We can't catch a break on our D-line. Leave it to some introverted geek professor with a power trip...to hold up McKinney by not grading his work.

Also - I thought Tavai was supposed to provide relief on the interior...not as an end ? This isn't any different than last year. We have a bunch of defensive ends...and no interior linemen that can pressure opposing QBs.

From what I've read Tavai could play at either DT or DE and he sounded happy to serve the team in whichever capacity Weis needs. I'm thinking Campo and Weis have a pretty good handle on the D-Line situation. That being said, they've sure got a lot to prove on the gridiron. Can't wait for Sept. 1.

"This isn't any different from last year" said nobody but you.

Table_Rock_Jayhawk... I see your point but I still think we are in a MUCH better position than last year. Opurum was aready good at end and we added Josh Williams who looks to be pretty good as well. John Williams, before injury, was a good defensive tackle and he is back. Add Tavai, Stowers, and most likely McKinny then you are looking at a BIG makeover. IMO it is not at all the same as last year. Also, never underestimate Campo and Holsopple can do for the d-line and guys like Young and Agostinho.

Last year Agostinho was 255lbs and playing on the end. This year he's 286lbs, stronger, faster, and playing instead where he's more comfortable.

This year's DL is very different than last years and the above is just one example.

I agree. If he can, I think Weis will prove a point this first game.

I would rather go 20-3... Really hoping for the defense to get going quickly. (Wouldn't mind 70-0... Just saying I'm looking for a good defensive showing)

CaliHawk33 - Here's my beef. It's been frustrating watching this position group have no impact on our performance since the graduation of McClinton back in 2008. IMO - If we could further improve the talent level on our D-line...this team really has a chance to compete in the Big 12. Every other position group has got a chance to compete at this level...except for the d-line.

Table_Rock_Jayhawk... While I honestly believe that this defensive line will be vastly improve, I completely respect your opinion and like to hear a bit of educated critical talk on the board. I am pretty optimistic about the season and about Weis, but there is no reason to be blinded by excitement. The defensive line was REALLY bad last year and your concern is completely logical.

Tavai was supposed to provide immediate relief in the interior. I suspect that Campo came to the realization that Tavai isn't the interior guy that they thought...and was forced to put him on the end.

or that Tavai is not as good as what we have in the middle but we still want to play him wherever we can... There is something to be said about a ear with a new Staff, it can make a huge difference among even experienced players.

Or the fact that he didn't go through spring practice and in fact arrived just a few weeks ago. He's still catching up. And it sounds like he can play either position. I think Tavai will be a very good player for us. Just wait.

A very late reply here, but Tavai was most known for his speed rush at the JUCO level and played both DE and DT. McKinney is supposed to be a DT all the way and provide immediate relief there while Tavai was recruited to play either DE or DT depending on where KU needed him most from the get go. Tavai is also 6'3" 290lbs, which is HUGE for a DE. That says a lot about how well he moves for his size that he's playing DE.

Also, unlike last year or the year before or the year before, there's a good group of DT's now who can all play. I think this group has had a significant upgrade over any DL KU has had since McLinton graduated. Hopefully with that many guys able to play they'll also generate more of a pass rush. I agree that's the part that we're all waiting to see about.

I was at the practice this morning. I was impressed with the secondary, I think last years busted coverages (think Baylor game) are largely going to be a thing of the past. From what I saw, we might struggle agaisnt teams that can pound the rock(think Texas and their stable of running backs). Crist has a cannon, but I'm didn't see a receiver that looke like a viable deep threat to stretch defenses.

That last part is a valid concern, but I believe they're there. It's just that they're not going to let you, I or anyone else see them until gameday. We'll see.

Why is the Hill gold? Drought, or re-seeding?

“If you’re leaving at halftime,” Weis told the large crowd at Corinth Square in Prairie Village, “You and I are going to get into a fistfight.”

Love it! If we are in the game at halftime, we will need the crowd to be a factor in the second half, and that starts with the student section.