Thankfully for us, all we have to do is sit back and watch. To make sure you’re fully prepared for the 2014-15 campaign, we’ll be rolling out a season outlook for each former Kansas University player who currently calls The Association home. 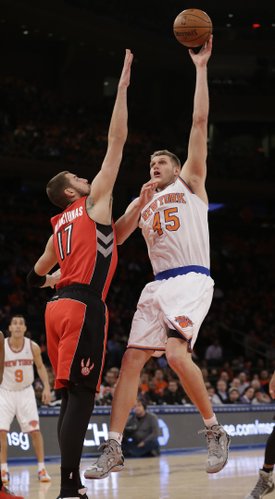 Playing for four different franchises in his first four years in the NBA, Cole Aldrich never has found a spot in a team’s rotation since he starred in the post for Kansas at the college level.

This season might be his best chance to make his mark. The Knicks re-signed him as a free agent this past summer, so they want him around. He isn't some random guy that got dumped on their roster as part of a big trade or anything like that.

Despite the majesty and grace of his pre-game warmup dunks, Aldrich finds himself entering this season, most likely, as the Knicks’ No. 3 or 4 low-post option — Amar’e Stoudemire, Samuel Dalembert and Jason Smith are the others.

“Hey, man. Remember me? We used to kick it in OKC. How bout some minutes, bro?”

Aldrich only played three minutes in the Knicks’ preseason Monday night loss to Milwaukee. But Stoudemire almost always gets injured and misses some time, so Aldrich needs to capitalize on that or whatever other chances arise to make sure he can extend his career.

The backup big man signed a one-year deal with New York, reportedly for around $980,000. So playing time or not, life is good.

Whatever role he earns this season with New York, Aldrich will have fun. The Knicks figure to be in the mix for a playoff spot in the wide-open Eastern Conference and when he isn’t contributing during games the center can always entertain himself and others (well, maybe not others) with his fake tooth.

We're finding out when @colea45 decides to use his fake tooth. Another episode of #SpeedDrills coming today! http://t.co/F1fe87aEKY

None by NBA New York Knicks

The @nyknicks' @colea45 having fun with kids at Midland Beach for @NBACares Employee Day of Service! #NBACaresNYC15 pic.twitter.com/LkgBa29msM