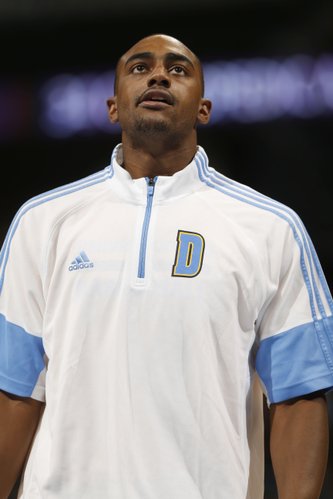 Did you know Darrell Arthur still plays in the NBA?

If you don’t follow the Association too closely — or the Denver Nuggets, in particular — you might have forgotten about the former Jayhawk, who contributed to the 2008 national championship before leaving Lawrence early to turn pro.

A late first-round pick in 2008, Arthur played four seasons with Memphis before the Grizzlies traded him in the summer of 2013 to Denver. Now in the final season of a three-year contract, Arthur exercised his player option to stick with the Nuggets this past summer.

“I wanted to be a part of this group when we make some noise this year.” – Darrell Arthur http://t.co/sM4YfEQLmt pic.twitter.com/OugeFydFZZ

None by Denver Nuggets

The backup forward is just quietly making a living (he’ll reportedly make $3,457,149 this year) on a solid team that missed the 2014 playoffs and doesn’t generate much national buzz in the loaded Western Conference.

Arthur might not be highly regarded around the league…

None by Darrell Arthur

… but it seems people within the Nuggets organization really appreciate him.

A community ambassador for Denver, former Kansas standout Mark Randall told KUsports.com that folks who work for the Nuggets feel like when Arthur gets the ball anywhere form 15 to 19 feet away from the rim, he can knock down jumpers.

“That's huge for us, to be able to have a (post) guy who can step out on the floor and knock that shot down, especially being 6-9,” Randall said.

"Defensively, he's not a liability… He can keep his guy off the boards and he'll go in and mix it up. He's a good one."

An unrestricted free agent at season’s end, Arthur told the Post he’d like to contribute to Denver’s success and turn that into an extended stay in The Mile-High City:

"I want to go out and do the things that I do. Play defense, bring energy, knock down open shots when I have them; being consistent at those things is the key. Then everything will work itself out."

Playing in the West puts Arthur’s Nuggets at a disadvantage, but if they can stay healthy, they have a shot at making the playoffs.

Denver (11th in the conference last season) won’t surpass the likes of San Antonio, Oklahoma City, Houston, the Los Angeles Clippers or Golden State. But their rotation — Ty Lawson, Arron Afflalo, Kenneth Faried, JaVale McGee, Timofey Mozgov, Wilson Chandler, Danilo Gallinari and Arthur — has the talent to get up and down the floor and score/compete with anyone.

Don’t be surprised if he turns out to be a key piece off Denver’s bench who helps push the Nuggets into the top eight out West — and into the league's national conversation.