One of the biggest questions when the Kansas football program entered the offseason was whether head coach David Beaty would continue calling plays.

Before TCU, Meacham was the co-offensive coordinator at Houston in 2013.

One way to judge offensive coordinators is the play of quarterbacks during their tenure. Kansas will head into the spring with a likely quarterback battle between junior college transfer Peyton Bender and incumbent starter Carter Stanley.

Here’s a look at the quarterbacks that Meacham worked with in the past few years, though it’s a little harder to evaluate because he wasn’t the only person directing the offense:

As a freshman, O’Korn was a 58 percent passer, throwing 28 touchdowns to 10 interceptions. He threw for 3,117 yards and was picked as the AAC freshman of the year.

After Meacham departed for TCU, O’Korn eventually lost the starting job (to Greg Ward Jr.) because of turnovers and a change of offenses. He transferred to Michigan where he was a backup this season.

"He had kind of a cut loose type of attitude, where they just opened the playbook up and let him learn on the fly and adjust,” O’Korn’s personal QB coach Ken Mastrole said.

O’Korn was more of a true pro-style quarterback and probably is the closest comparison to Bender and Stanley. Freshman Tyriek Starks probably fits the mold of the next two quarterbacks that Meacham worked with.

There’s plenty of stories about Boykin’s rise from his sophomore season to his junior year when he finished fourth in Heisman voting. Boykin transformed into a dual-threat quarterback that threw for 33 touchdowns and 3,901 yards on his way to Big 12 offensive player of the year honors. He ran for 760 yards and nine touchdowns.

“The biggest thing that both of those guys (Meacham and Cumbie) gave him was more from a confidence standpoint,” TCU coach Gary Patterson said. “It was saying to him and giving him a chance to show to himself, ‘This is what you can be.’”

The Frogs were a top-five offense in the country during both seasons, setting school records in several categories.

The Texas A & M transfer started for the Horned Frogs last season and had his ups and downs. A dual-threat quarterback, Hill completed 61 percent of his passes for 3,208 yards and 17 touchdowns to 13 interceptions. On the ground, Hill ran for 609 yards and 10 scores.

When TCU escaped Memorial Stadium with a 24-23 victory, Hill threw for 203 yards, one touchdown and three interceptions against the Jayhawks. One of the low points in TCU’s season was a 31-6 loss to Oklahoma State, the fewest points scored in the Gary Patterson era.

“Shoot, maybe we’ll be changing offenses again,” Patterson said after the loss to the Cowboys. “You have to be able to run the football. Definitely how we practice and do things in the spring and in two-a-days, I can tell you that. … My guys downstairs know I love them, but the bottom line is we had two weeks to prepare.”

Meacham added last month: “I think once you look back and kind of reflect and absorb and digest what happened last season, I think it will motivate you, if you want to play this game of football. I know for us as coaches it does. It rejuvenates your mindset toward improving and just getting better in every aspect. It regenerates that.” 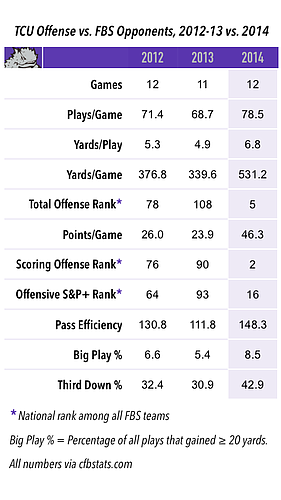