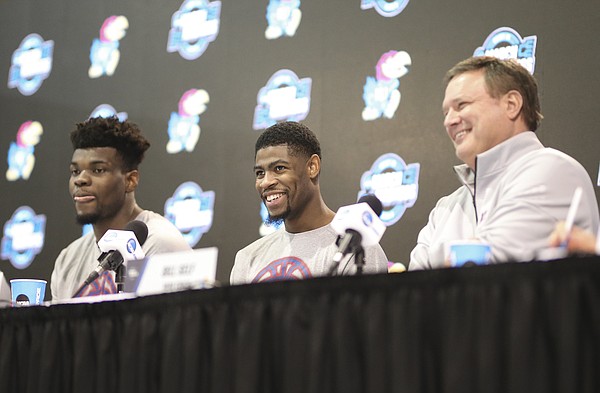 Playing as well as anybody in the NCAA Tournament, Kansas sophomore Malik Newman said there was one moment when he felt like he arrived in a big way.

No, it wasn’t the 32-point performance against Duke. It wasn’t any of the big shots he hit earlier in the tournament.

Newman’s welcome-to-the-big-time moment was a message from the official Twitter account of Little Debbie, the manufacturer of some of his favorite snacks. The account messaged him on March 16 saying it was “very sad to hear about your Donut Stick plight,” referring to a story he told the media in the preseason about roommates eating his beloved donut sticks.

“I went to the page and saw the blue check,” said Newman, referring to the checkmark which verifies it’s an official account. “I’m like, ‘Yo, this is Little Debbie for real?’ So I had to tweet her back, ‘I love you guys. We need to sit down and talk and make a Malik Newman donut stick or something.’ I was excited. I felt like I had made it.”

Sharing his latest story about Little Debbie snacks on Tuesday, Newman was ecstatic when he saw the official account followed him on Twitter on Wednesday afternoon.

When the Little Debbie Twitter account first started interacting with him, he thought it was a prank from one of his teammates.

“For real, all jokes aside, I thought it was fake at first,” Newman said. “I was like people are playing.”

Lighthearted in tone but serious in the message, Newman is proud of his social media accounts. He just wishes he had the blue checkmark to verify his Twitter and Instagram accounts like some of his teammates.

Featuring more than 53,000 followers on Twitter, Newman was confused why Mitch Lighfoot’s Twitter (about 11,000 followers) was verified and his was not.

The person running the Little Debbie social media account messaged him on Wednesday, “Good luck on the court this weekend! Oh, and hope you get verified soon by Twitter. Not sure what’s taking them so long.”

For Newman, it’s just another person who believes in his social media accounts.

“A lot of people think that I should be verified,” Newman said Tuesday. “I think I should be verified. So Twitter, we need to make that happen. Instagram, too, because coach (Jerrance) Howard is verified on Instagram and I’ve got more followers than coach Howard. We need to sit down and have a meeting.”

Yeah, he's ready to go pro. Hopefully his interaction with Little Debbie doesn't end up constituting a violation of his amateur status.

It would be the worst to have to forfeit a championship because one of the players tried to arrange a "business meeting" with Little Debbie on twitter.

Malik's gone! I'm enjoying these last games with him because he's been our Kemba