Jay Wright, Bill Self weigh in on idea of KU-Villanova as de facto championship game 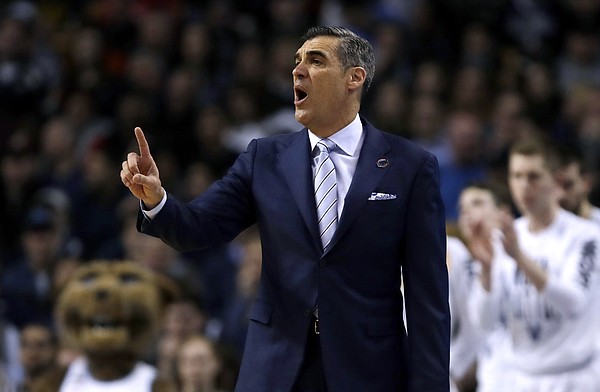 San Antonio — When No. 1 and No. 2 seeds began dropping out of the South and West regionals before the NCAA Tournament’s Sweet 16, it became clear The Madness was intent on devouring the left side of the bracket.

So by the time a team emerged from each region as a Final Four participant, one national semifinal quickly became characterized as the undercard.

With the first national semifinal Saturday night at The Alamodome placing No. 3 seed Michigan against March darling and No. 11 seed Loyola (5:09 p.m., TBS), some have gone as far as to label the matchup on the opposite side of the bracket between No. 1 Villanova and No. 1 Kansas as the de facto national championship game.

In his 17th season at Villanova, head coach Jay Wright trusts his players won’t buy into that line of thinking. Whichever team gets out of KU-Villanova alive will have to win one more time to secure the national title.

“The good thing is I think our guys have a good understanding and respect for everybody in this tournament,” Wright said earlier this week, “so I don't think they would even think that this is the national championship game. Our guys wouldn't think that way.”

The NCAA could avoid having one semifinal appear more stacked than another by changing its Final Four format and re-seeding the teams for the season’s ultimate weekend. This year, for example, Villanova, as the top remaining No. 1 seed, would take on No. 11 Loyola in one game, while No. 1 KU and No. 3 Michigan would play in the other.

Kansas coach Bill Self, asked for his thoughts on the re-seeding debate, replied: “Well, since they are not going to, I'm going to say: No, I love it exactly the way it is.”

The coach then conceded it would be “great” to re-seed for the national semifinals. 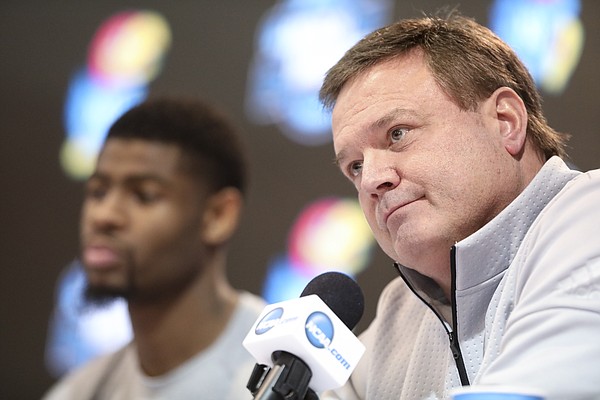 Kansas head coach Bill Self listens to a question during a press conference on Saturday, March 24, 2018 at CenturyLink Center in Omaha, Neb. by Nick Krug

“I think whoever is saying that, obviously is probably getting a little bit ahead of themselves,” Self said of KU and Villanova being a two-days early title game. “It looks like it's maybe the marquee game of Saturday, just because it's one versus one, but trust me, the other game is just as marquee as this one.”

Of course, nationally renowned coaches ultimately don’t care how games are being categorized or what modifications talking heads are debating. Wright mostly is concerned with devising a game plan that will push Villanova (34-4) past Kansas (31-7) and into the actual national championship game.

“They are as explosive an offensive team, I think, as we've played all year in terms of always having the ability to be a great team and using their big men,” Wright said. “And now they've probably got, in addition to their bigs, the best perimeter team they've ever had.”

Wright said he and his staff, through the years, have always watched Self’s teams to pick up different ideas on how to best use their big men.

“And now he's still got those big guys that are really effective, but the guards are amazing,” Wright said. “So it's going to be a very difficult defensive matchup for us.”

Bill Self on Jayhawks’ focus and status of international family members trying to attend Final Four by KUsports.com

Re-seeding would be great, but that won't happen for a couple of years. I'm completely stoked for this game...I live near Philadelphia. I WANT THIS GAME!

If we've learned anything from the regular season (and the postseason for that matter) then we should know that anyone can win one game any night.

Losing to Washington at Sprint Center and in AFH three times, including games against ASU, TTU, OSU. Those losses will hopefully help KU prevent a letdown game should they win against Nova on Saturday night.

still shouldn't have lost to osu or asu, Tech either for that matter

I don't see them changing unless it hurts ($).

I agree. There's always the 'money angle' for the NCAA...if there's no money in it for them, then they don't care.