3 keys for KU football at No. 15 Oklahoma State

For a long struggling program like Kansas football, competing with — and holding a fourth quarter lead against — powerhouse Oklahoma a week ago was a drastic change from recent Big 12 defeats for the Jayhawks, who have lost 16 conference games in a row.

Whether that one result can be a turning point for the future of the program could depend on what happens in the final five weeks of this season, beginning with a daunting road game at No. 15 Oklahoma State.

“You hope it's a building block,” head coach Lance Leipold said of the upset scare his Jayhawks gave OU. “But again, we lost the game. I mean, we can't lose sight of that.”

Added Leipold: “I think that's where I sometimes quite honestly feel it's fragile. I want to acknowledge the positive, but what could have been, too.” 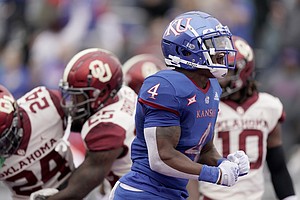 Those types of reminders have been talking points for KU’s coaches throughout this week. Offensive coordinator Andy Kotelnicki said he thinks players on that side of the ball have responded well in practices after having their best showing in a Big 12 game this season (highs of 412 yards and 23 points versus OU).

To illustrate his point about how the Jayhawks need to avoid feeling satisfied by contending with OU, Kotelnicki during the offense’s Monday meeting showed the players a picture of a bear trap.

Kotelnicki told the players that every week there’s always a trap, and it’s important for KU’s football program that the Jayhawks don’t step into one right now.

“This week's trap was a sense of a moral victory, as though you have arrived,” Kotelnicki said.

While the O.C. pointed out to the players he was happy they were able to perform better and give some energy to themselves, the program and the fan base, he also told them the reality of the situation was they didn’t do enough to beat Oklahoma.

“So whatever we did, we need to still do more,” Kotelnicki said. “And I'm talking to myself when I say that out loud, too.”

As Leipold said, the promise the Jayhawks showed against OU could be just a blip if they don’t have the right approach in the aftermath.

One area where the Jayhawks must keep positive momentum is the physicality department.

Super-senior receiver Kwamie Lassiter II said that’s been a point of emphasis for him in recent weeks, dating back to a third-down catch he had in KU’s blowout loss at Iowa State on Oct. 2.

“I caught an out route, I got out of bounds. And it was short,” Lassiter said of the four-yard gain on third-and-5, with the Jayhawks already behind by 14 in the first quarter. “We went for it on fourth down. We didn't get the the first and it was (ISU’s) ball.”

First-down yardage was attainable for Lassiter if he had looked to take on the defender instead of getting out of bounds.

“And that's not what you want in a football game, especially against a team like that,” Lassiter said, looking back at the play. “So it was an emphasis, going north and south.”

Kotelnicki said coaches are stressing physicality with the “whole football team,” not just Lassiter. But the O.C. credited the veteran receiver for taking on that challenge.

Against OU, on a play-action pass to Lassiter, Kotelnicki said he saw the wideout make a decision to take on a defender, as opposed to avoiding contact and going out of bounds. Lassiter’s effort gave KU a first down.

“And that's what we're looking for,” Kotelnicki said. “We’re looking for the mindset and the mentality to understand that physical football typically is winning football.” 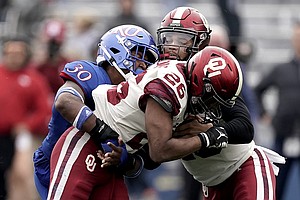 Oklahoma running back Kennedy Brooks (26) hands the ball off to quarterback Caleb Williams, back, as he is being tackled by Kansas linebacker Rich Miller (30) during the second half of an NCAA college football game Saturday, Oct. 23, 2021, in Lawrence, Kan. Oklahoma won 35-23. (AP Photo/Charlie Riedel)

Of course, KU defensive coordinator Brian Borland believes in physical football, too, and has preached as much to his players.

Last week against OU, Borland said the defense played its most physical game yet.

“We didn't get pushed around at all by those guys. We really didn’t,” Borland said.

Even comparing the defense’s performance versus the Sooners to how the unit played in a 17-14 win over FCS program South Dakota in Week 1, Borland said he told the players their Week 8 showing was better and closer to what he’s been looking for from the group.

“Just flying around, hitting, knocking guys back, from that standpoint, that was the best we played,” Borland said.

Borland thinks the improvement has to do with the defenders getting more comfortable in the scheme, which allows them to execute and make tough plays more often.

“We can play faster now,” Borland added. “We don't have to think quite as much.”

3. Stop the run — and pick up on passing cues

Oklahoma State’s offense might not be putting up as many points (27 per game, seventh in the Big 12) in conference play as the other top teams in the league this year, but Borland said the Cowboys’ balance can keep defenders on their heels if they’re not careful.

“I don't know if they’re a team that would really love to just drop back and throw it 50 times a game — they haven't shown the desire to do those things,” Borland said of OSU, which is averaging 28.5 pass attempts and 232.3 passing yards a game in Big 12 play.

“Not that they can't throw, but they're a solid run team, and then it's play-action pass, and boot passes, and just different things, RPO quick throws, that really complement the run game,” Borland explained of what makes the Cowboys effective and potentially difficult to defend.

“You know, it's hard to put your finger on them,” KU’s D.C. continued. “You have to stop the run. But they have other options, as well, and their personnel is pretty good.”

OSU’s ground game has benefited from the emergence of running back Jaylen Warren, a transfer from Utah State who is averaging 147 rushing yards a game in his first five starts this year. Warren (4.7 yards per carry) has picked up six runs of 20 or more yards in the past five games.

Plus, junior Cowboys quarterback Spencer Sanders is one of just three QBs in program history to surpass both 4,000 passing yards and 1,000 rushing yards in his career. In his six appearances this year, Sanders has completed 59.2% of his passes, with nine TDs and five interceptions. He’s averaging 197.3 passing yards and 40.8 rushing yards a game.

KU’s defense will need to eliminate big rushing gains versus OSU. A week ago, the Sooners totaled 220 yards on the ground and 106 of those came on two plays — a 40-yard touchdown by QB Caleb Williams and a 66-yard reverse by receiver Trevon West.

Leipold said OSU has the type of team he wants to build at KU in the future: a “big and physical, balanced, excellent football team.”

Everything I read here is consistent with a culture for a successful football program. I really am excited about the future of KU football under Coach LL's leadership. I do long for the day that our defense can wipe the arrogant smile off an OU quarterback's face.

16 straight conference losses. Who was the boneheaded chancellor that fired Mark Mangino? Hiring a chancellor who would fire Mark Mangino and install the group of losers she installed is an example of a completely incompetent board of regents as well as the hiring committee they appoint. The hangover from her incompetence and their incompetence continues.

Let’s hope that Lance Leopold can get the patient off the sick table. The sad thing is that if he does, the losers at the helm of the ship will find a reason to fire him and install another group of losers. But maybe LL can at least bring a few smiles to the fans and players faces before they run him off for being a winner.

Chancellor Gray-Little was not a huge fan of football and the money spent on the program. Her #1 priority was education, which is the purpose of a university. My guess is she relied heavily on the advice of the athletic director, who was a bit a bully, given she was new to the University (2009) and the athletic department. Perkins alienated many long-time and loyal alumni and was used to getting his way. As we all remember there was also controversy at that time about player abuse allegations, whether legitimate or not, it is the responsibility of the University's leadership to address, and she followed the advice of AD Perkins. The current chancellor is committed to high education and building a viable and well-run athletic department, including football. The hiring of AD Goff and coach Leipold under Girod is a positive step in the direction of the latter. Yes, in hindsight the past hiring's by Gray-Little and Girod have not worked out well, including AD Long and coach Miles who were more show than substance. I hope and believe that the athletic department is in good hands with Goff who is both deeply loyal to the University and a realist. Stay the course. Rock Chalk (and we got robbed against OU).

"And the opinions expressed are solely the author's and do not reflect the opinions and beliefs of the University."

Bet over, and take the points.

Which KU team will show up, Trick or Treat? For just a half or both.

It was rewarding to see the game plan against OU which led to the upset (correction near upset). Clearly OU is overrated and took KU lightly. Now onto a game under the lights on the road against a team purported to be the most physical on KU's schedule. The game was in reach last week because KU limited OU's touches and contain their QB and limited big plays until the 4th quarter. Now onto OSU. KU is given a 2.7% chance of winning (ESPN predictor). The numbers based on points allowed and points scored favor OSU winning by 30.1 (my simple calculations and near the Vegas spread). The good news is OSU is not a high-octane offense (at least up until this game) so if KU’s defense can limit big plays, maybe KU can keep close. Let's hope the win against OU (sorry near win – unlike OU and the rest of the football world I have not moved on) is the impetus to take a big step on the road against a very good team. I had OSU winning the Big 12 until their loss against ISU. KU needs to bring their A+ game. The margin of error is so small, that a near perfect game might not be enough. So perfection Jayhawks! Rock Chalk.