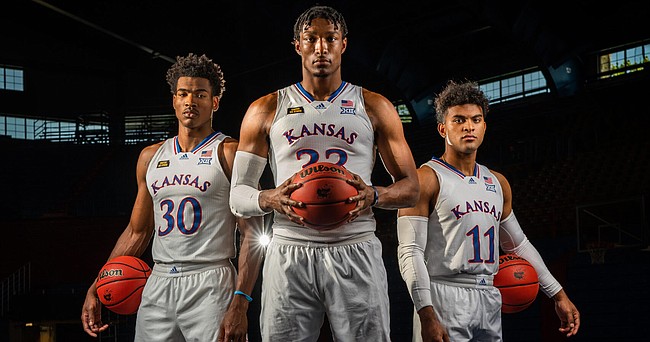 The 2021 preseason all-Big 12 men’s basketball team has a significant KU hue to it.

Newcomer Remy Martin on Wednesday was named the Big 12 preseason player of the year by the league’s coaches and he was joined on the six-man first team by KU seniors Ochai Agbaji and David McCormack.

According to the Big 12, a tie in the voting resulted in an extra spot being added to the preseason team.

Martin becomes the 10th Jayhawk to earn preseason Big 12 player of the year honors and the eighth under current Kansas coach Bill Self.

“I’m happy our players are getting preseason recognition but they understand the success of the team will translate to postseason honors,” Self said in a news release shortly after the team was announced. “I’m glad they are on people’s radars heading into the season.”

Agbaji, who returned to KU for his senior season after exploring a jump to the NBA draft in the offseason, led the Jayhawks in scoring last season at 14.1 points per game. He also earned all-Big 12 honorable mention honors for the second season in a row. He enters the upcoming season ranked 18th on the KU 3-point field goals made list with 147 and 16th in 3-point field goals attempted with 418.

McCormack averaged 13.4 points and 6.1 rebounds per game in 2020-21 and was the named the first recipient of the Big 12 Most Improved Player Award at the end of the season. The Norfolk, Va., forward also earned a second-team all-Big 12 nod at the end of last season.

Carr also received preseason newcomer of the year honors and Baylor freshman Kendall Brown was named the preseason freshman of the year.

Coaches were not allowed to vote for players on their own teams.

Michael - Valid logic, but it’s a matter of voting so the coaches can choose who to list. They chose to recognize both players with a slight nod to Remy as POTY probably being considered slightly better than NOTY.

While nice recognition, it should be motivation for plenty of players/teams. It’s not like we’re the only highly rated team this year. Jalen should be plenty motivated, especially if he does really expect to make the jump next year. Ultimately, if the team is really successful in March and April then he (and others?) will likely have done enough to go, similar to Mario and others.

Its the awards at the end of the year that matter.

Who cares that a transfer who has beaten us twice, is considered the Preseason player of the year in our conference? It a meaningless selection. I like Remy and he might be the best player on our team, but that says something about recruiting and our conference.

Remy is projected a 3rd team All American.