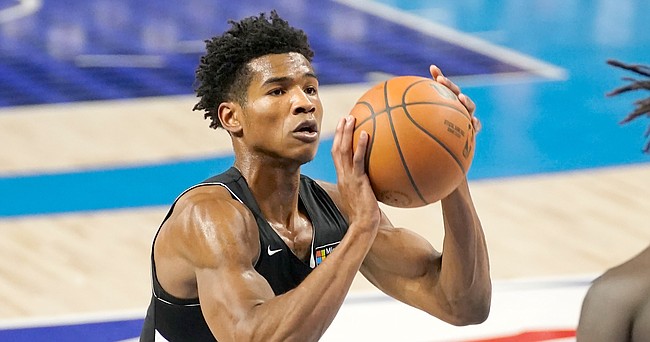 After two days of posting solid numbers in the measurement and testing portions of this year’s NBA combine in Chicago, University of Kansas senior Ochai Agbaji was quiet in his first team scrimmage on Thursday.

Coming off the bench for Team 4, which fell to Team 3, 94-54, in the second of two afternoon scrimmages, Agbaji had a hard time finding opportunities to showcase his game.

He finished with four points on 2-of-7 shooting and misfired on all four of his 3-point attempts, most of which came off the dribble.

Agbaji added two rebounds, one assist, one steal and a turnover in his 23 minutes on the floor.

Agbaji, who squared off with former KU teammate Quentin Grimes (12 points, 6 rebounds and 3 assists) on Thursday, will get another opportunity to scrimmage Friday afternoon.

Baylor coach Scott Drew, who has become familiar with Agbaji’s game in the past few years, was in Chicago for the action and he praised Agbaji’s game during the broadcast.

“Great athleticism, somebody who has become a more consistent shooter and defensively he’s someone you can switch with,” Drew said. “As he continues to get better putting it on the floor and his assist-to-turnover ratio improves, he’ll have some real potential. In the NBA, if you can make 3s and you can defend, you can make a lot of money.” 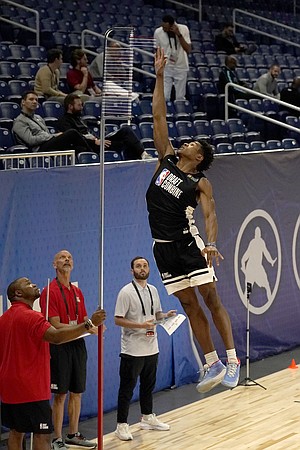 Although KU’s leading scorer last season had a quiet outing on Thursday, ESPN analyst Jay Bilas said putting up numbers in a game-like setting was only part of what makes the combine scrimmages important.

That concept makes what Agbaji did in the days leading up to the scrimmages just as important as anything that happens late in the week.

And all of those elements combined create each player’s portfolio.

As expected, Agbaji measured well, and his athleticism showed up on paper.

In the physical testing drills, Agbaji’s max vertical leap of 41.5 inches was the third best among guards and tied for the sixth best mark among all players. And his lane agility time of 10.88 seconds also landed him in the top 10 among all participants.

Earlier this week, ESPN.com draft expert Jonathan Givony listed Agbaji in the No. 59 spot in the 60-pick draft.

Agbaji, along with KU teammate Jalen Wilson and Arizona State transfer Remy Martin, has until July 7 to make a final decision about keeping his name in the draft pool or returning to Kansas.

Following the combine, which wraps up Sunday, Agbaji is expected to have the opportunity to travel to different cities to run through individual workouts with a number of NBA teams before the July 7 deadline.

This year’s NBA draft is set for July 29.

As long as he does what is best for him that is great. But if I was a NBA GM and drafted Ochai I would be seriously concerned about my job moving forward

I agree with Brian. Athleticism is what is drawing praise. But in the end if you can't throw the ball through the basket routinely, you are not going to stick in the NBA. Unfortunately we have seen many examples of recent KU guards who have found it difficult to stick in the NBA. Maybe it would be best for Mr. Agbaji to hire a shooting expert and focus on his professional game. It is not clear how much he will improve his NBA career aspirations by returning for a senior year of college ball. Jalen Wilson is a different story. He would clearly benefit from another year at KU.

I disagree with the concept that athleticism is his biggest strength. I think that we've seen players who were drafted purely because of their athleticism and this vague ethereal idea of "potential" even despite being unskilled and immature. Ochai is different from a player who is draftable based purely on having an NBA ready body and elite athleticism. Clearly scouts already know about Ochai's athleticism if they watched KU the past couple years. Ochai's showing at the combine clearly places him in the top 10 of the draft based on altheticism and measureables, but that hasn't guaranteed him a place in the draft. I think that his maturity and character are what is going to move him up in the draft.

So yes, he's a tremendous athlete. He's also a bit of a late bloomer in terms of his development into an elite prospect. He's smart and hard-working. Nose to the grindstone, stays out of trouble. Probably the biggest weakness is that he's too passive and not assertive.

He's got sky high potential and a solid floor below him him. It's hard for me to imagine he doesn't get drafted because to me he looks at the worst like a solid reserve but with the upside of a player who could develop into a franchise star as a veteran.

Over and over again through the years the players have shown that it is misguided to think that they won’t continue to develop. Ochai can most definitely continue to improve the reliability and consistency of his shot during the next year whether that be in Lawrence or elsewhere. That and ongoing ball handling improvement will continue to improve his draft position.