Kansas coach Bill Self meets with players during the second half of an NCAA college basketball game against West Virginia, Saturday, Feb. 6, 2021, in Morgantown, W.Va. (AP Photo/Kathleen Batten)

The Kansas men’s basketball team never led during its 91-79 road loss at West Virginia on Saturday, trailing for 37 minutes and 51 seconds of the 40-minute game.

KU was able to get it tied a couple of times in the second half after facing a 10-point deficit at halftime. But the Jayhawks (12-7 overall, 6-5 Big 12) never capitalized on the few opportunities they got to go ahead.

“I'm not saying that would have made a big difference by any stretch,” Kansas coach Bill Self said after the loss. “But it would have been nice to see (what could’ve happened) if there was a little bit more game pressure on (the Mountaineers).”

Instead, each time Kansas crawled back into it, WVU (13-5, 6-3) hit the Jayhawks with a mini-run to reclaim control of the game and keep the visitors at arm’s length.

“We had an opportunity to take the lead multiple times in the second half,” Self said. “And we missed free throws, or whatever it was.”

Self said playing from behind all afternoon, like they have done throughout their recent rough stretch, put added pressure on KU’s starters and also forced Self to keep those guys on the floor longer, which often leads to fatigue setting in late in the game.

Four of KU’s five starters played 33 minutes or more, including Ochai Agbaji, who played 39, and Jalen Wilson, who played all 40. 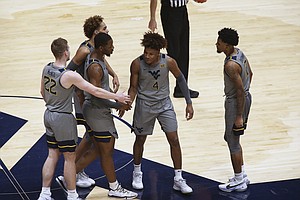 Junior guard Tyon Grant-Foster did not play during Saturday’s loss at West Virginia because of an ankle injury.

Self said Grant-Foster injured his ankle in the first minute of practice on Friday and was not able to return.

Grant-Foster is listed as day-to-day and it remains to be seen if he’ll be available on Monday night.

KU’s coach was whistled for a technical foul during Saturday’s second half after arguing with officials during a stoppage in play.

Self revealed after the loss that he was actually arguing a call that happened “about five minutes earlier.”

As for whether he deserved to get T’d up, Self said he agreed with the whistle.

“I deserved a technical,” he said. “I wasn't very happy with the officiating the whole game at all, but that didn't have anything to do with the outcome. But I thought there was inconsistency all across the board. … Trust me, I felt like I deserved it. I probably could have got another one today. I was pretty short-fused with those guys today.” 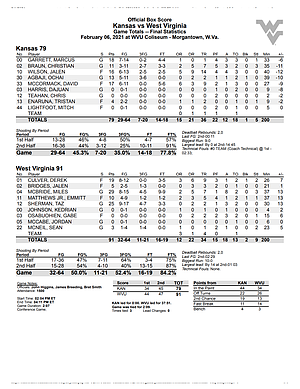 Throughout the first several weeks of the season, when Kansas passed UCLA for the NCAA record of most consecutive weeks ranked in the Associated Press poll, it looked as if yet another impressive KU streak could go on forever.

But KU’s struggles in conference play quickly changed that outlook and the Jayhawks now will enter Monday in jeopardy of falling out of the poll for the first time in 231 weeks.

“We won’t be ranked on Monday,” Self said after the loss to West Virginia. “Nor do we deserve to be ranked.”

After falling eight spots to No. 23 in last week’s poll, following a close home win over TCU and a double-digit loss at Tennessee, the Jayhawks won by 23 at home against Kansas State on Tuesday night.

But it’s unlikely that that will be enough to keep them in the poll next week. Even though Saturday’s loss at West Virginia would not be considered a bad loss, the fact that the Jayhawks now have lost six of their last 10 games makes their status as a top-25 team questionable.

Kansas entered the weekend ranked 22nd in the NCAA Tournament Evaluation Tool rankings, which have been used in recent years to help fill out the tourney field in March.

That ranking, if KU were to stay there through the end of the regular season, would put Kansas in line to be a No. 6 seed in the upcoming NCAA Tournament.

KU still has time to improve upon that, though, and other factors, such as the quality of KU’s wins and strength of schedule, could inspire the selection committee to put the Jayhwks slightly higher — or lower — than where their NET ranking would slot them in the upcoming NCAA Tournament.

For instance, ESPN Bracketologist Joe Lunardi had Kansas projected as a No. 5 seed in his most recent update heading into Saturday.

KU entered Saturday ranked fourth in the NET’s strength of schedule metric. That’s familiar territory for Self’s squad. KU led the NET’s SOS rankings in each of the last two seasons and has finished with the nation’s toughest schedule five times under Self (2005, 2014, 2015, 2019 and 2020).

Saturday’s loss dropped the Jayhawks to 12-7 overall and 6-5 in Big 12 play. You have to go back to the 1987-88 season to find the last time a Kansas team had seven losses by Feb. 6. Beyond that, this season marks the first time since the inception of the Big 12 Conference in 1996-97 that Kansas has reached five conference losses by Feb. 6... KU is now 4-5 this season against ranked opponents... The loss snapped KU’s five-game winning streak against West Virginia, and the Jayhawks now lead the all-time series with WVU 15-6.

The cloud of NCAA probation Has kept us from recruiting Difference makers! Worst Team I can remember for 20 years. KU should use legal resources To immediately require NCAA resolution!!!

Good point. We do not have difference makers. Thompson dissapointing this year for a 5Star, but look out next year.

Thompson reminds me of another 5 star that Kansas had recently, Quintin Grimes. He was lousy playing at KU, but I guess has become a star at Houston.

I'm tired of hearing Self make excuses for losing. I question the team's weight lifting & conditioning program, seems like we have a lot of balls taken out of our grasp and we don't play near 100% effort.

Kansas has certainly regressed with Andrea Hudy now at Texas, that's for sure.

Kentucky losing season ,Duke 500 season Michigan State struggling North Carolina again looking average .....Now Kansas ..........Maybe they need to take a page out of Gonzagas approach to basketball its been working for some time for them . And as far as the Big 12 Baylor is the desired landing spot now ...........Baylor! .....Recruiting is the life blood of any program but it only works if you recruit the right type of players .......e.g. ..Gonzaga

Interesting point about Gonzaga's "right type of players", Mallory. And, I'm sure it's true. But can you please amplify on that, being more specific? Thanks! We do have very good players... just not one or more GREAT players.

Sure Jim , Gongaza is not loaded with 5 star players ,they are a fundamentally sound ,team first type of players No player has to carry the team they work as a unit. And because they arent one and done the guys play multiple years together.Its not about getting to the NBA its about having fun and winning playing hard for your coach and team . Jim do you remember when Butler had a 2 year run years ago ,small school upper classmen who played together Brad Stevens was the coach back then .He pretty much had the same demeanor as Mark Few . Part of a coaches job is to make average players better players and good players great players . Self hasnt done that with this team. Self publicly calls out his players ,Self wont play you if he doesnt trust you.Self is impatient if you make a mistake he takes you out of a game .Remember Landen Lucas ....Self at senior day said he spent four years trying to replace him . It was Mason and Graham that told Self that Lucas gave us the best chance to win ...............we won !7 in a row with Lucas starting Self ruins a players confidence This team isnt confident ,not having fun Mark Few gets more with less talent , Self gets less from more talent

Mallory Gonzaga has several 5star players on their team, and they play the weakest schedule of any major power. This is their year, but their is nothing miraculous about it. Everyone else is down. I looked it up on 247Sports. Gonzaga has 4 4star players and 2 5Star players. Which is the same as KU. Actually better, David McCormack was a 4/5Star depending on rating service, and Bryce Thompson was rated a 5star. Nemhardt and Suggs are both 5star players.

Just checking but did Gonzaga play UC:LA, Oregon or Arizona this year? And anyone who wins 15 big 12 titles in a row, and whose team has the record for most weeks in the top 25, has to be doing something right.

In reality this team has a very fragile psyche, it is just a fact, and who has Self called out.
Our defense sucks, and it should be called out.

Layne you are right ............but too much is made of what a players ranking is coming out of high school .Not all 5 stars live up to their rankings ...Remember Quentin Grimes didnt pan out Wayne Selden and Malik Newman projected to the NBA not so much Then you look at Frank Mason and Devonte Graham not heavily recruited and look what happen with them . Bottom line is Gonzagas players are playing better than our player all ratings aside .

When's the last time KU played on the first day/evening of a conference tourney?

You are right that Gonzagas players are playing better than our players, they are playing close to their ceiling, and we are not. Some of that may be coaching, but it is also on the players do do their jobs, and to bring real determination and grit to every game, that is as much of a problem as i see it, as is the ability of the players. Offense, you have it or you don't on any given night, but you can still rebound and play defense, and share the ball. We simply don't do what it takes.