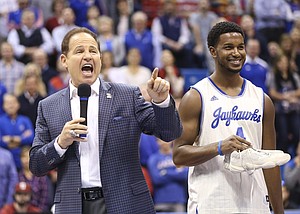 I"m really excited to see the staff he builds. This championship week seems to have slowed the hiring of assistants (at least I hope). I still think he will have a solid OC.

His Tv interview was great as well during the second half. As a side note, I'm wondering how Texas is feeling about the B12 refs this morning after playing a team yesterday that I'm sure the powers that be knew the playoff and B12 relevance were at stake. Game seemed a little one sided on the penalty, and more importantly on the non calls.

Now, let's go to Mark Mangino (our game time analyst) to review the referee performances thus far in the game.

The million dollar lost. Because KU lost, we had two teams get the into BCS bowl games and we still had one. The BCS had a guarantee of ~$15MM in a revenue sharing conference. KU received an additional $1MM for that loss, about the difference for the game that UT would have gone to.

Most of us would still rather have the win, but at least in this case there was compensation.

The decision to create a title game paid off, at least for this season. OU gets in the playoff by virtue of beating UT, otherwise Ohio State would have gotten the fourth spot. IMO Georgia is a better team and might be the only team in the field who could beat Alabama.

They played, they lost. We need teams, I would say Notre Dame was likely the team that didn't deserve to get in compared to Ohio State.

Have to agree. Georgia has their shot and couldnt do it. Lets give someone else a try instead of having the rematch of that game in a couple weeks.

Also I wish the NCAA would force ND to move into a conference. Seems kinda nice to be able to pick a choose who you play every week. They played a total of three ranked teams all year. Sure some big names on their schedule but those teams are not top dogs right now or even ranked (USC, Stanford, FL ST).

You can call me bias or any host of other names but don't call me a "texas fan", that is downright ugly, lol. I had no dog in the fight, just my opinion. If you want an example, Texas had no wiggle room on pass interference but felt a couple of obvious ones, especially on a late critical drive, by OU their flags were stuck in their pockets. I really didn't care other than as a Jayhawk, I can relate. OU is probably going to embarrass the conference against Alabama with their lack of D. There is really only two teams in the country who can probably beat bama and bama just beat one of them.

Yes they have a lack of D, but then again out of the four remaining teams they might have the best O. Could be interesting to see or could be a blow out.

I just hope they dont get blown out because I am tired of only hearing about the SEC.

Recruits were in town this weekend. Here’s hoping we get some commitments to get the ball rolling.

Live in the past much? Beaty is gone and we have a great coach in place but yet you cant get him out of your mouth huh?

I saw several “kids/young men” setting alongside Miles and figured they were recruits. I’m surprised there has been no story about who they are, where they are from, how many stars, who they are considering, etc. When can we expect to hear something