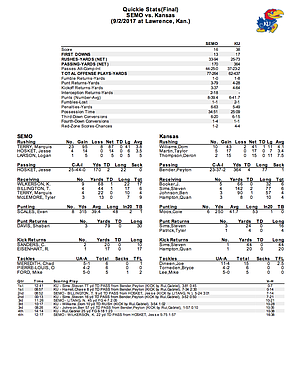 I thought the defense was OK. Bender looked OK considering competition. I thougt he had "happy feet" too often. O line HAS to get better. Your passing game opens up when your running game works (at least with the roster we have). 76 rushing yards and 38 points is unacceptable against SEMO. I give our overall performance a C

The turnover margin has to change as well

Lots to be concerned about. More problem areas for the offense than I had envisioned, including issues with Bender himself. Defense needs to step up some. Didn't look as sharp as last year, considering the opponent. Still, its the first game of the year played against someone other than guys wearing Kansas jerseys. Improvement has GOT to happen.

Pretty frustrating to watch. Not terrible would be my description. Bender missed quite a few open guys, no run game, average defensive performance. Pretty blehhh all the way around. On the plus, the kicking game looked reliable, though the punt coverage was awful. As you said, lots to be concerned about. Not at all what I had hoped to see. Next week must be much, much better.

Game momentum turned on punt fumble. Gave semo confidence they could play. Defense decent but needs to get to qb and offense inability to do anything with run game a huge problem

Agree with the tone of the posters above. Really thought we would see a dominating performance tonight. Lots of simple miscues and no real area where they just looked dominant. D looked slow to the ball.

Its the first game. Don't think I'd draw too many conclusions yet. Execution appeared better from what little i saw of the game. 3rd down conversion rate and turnovers were my biggest disappointments. Also run game not too good. Defense looked decent, offense better than last year.

But hey, its a w. Turner Gills squad beat Baylor. I wouldn't take too much away from a game. Okie State lost last year to our next opponent and they finished the year strong. Improvement week to week is what we need to see.

Personally, I was satisfied with how we went into halftime with the quick score to make it 21-7. That really took the air out of SEMO. And we really put the game away in the 3rd quarter too with both of the quick TD drives.

I wasn't happy with how we finished the game (see: all 4th quarter). But I'm wondering if it had something to do with the fact that it looked like 25,000 of the 32,000 in attendance left before the 4th quarter even began. It seemed like it took a little life out of the stadium. Kind of disappointed in the thousands of fans that left way too early.

I left this elsewhere. Pretty much restates my impression above in more detail:

"One game in and it seems like Bender's situation is a mixed bag. He's FAAAAR more accurate than Cozart ever was. More poise than Ryan Willis. But comparisons to Cozart and Willis shouldn't color our overall impression of his performance. Pundits have said, "This is the first time a Kansas QB has thrown for 4 touchdowns since Todd Reesing," but Todd did it against Mizzou. Bender did it against SEMO. He "only" threw 2 INTs, but several other passes could easily have been picked off. Many of the yards he threw for were yards after the catch. Some of his passes were caught by receivers making good adjustments to the ball. I'm not looking for a reason to be pessimistic, but TCU, OU, KSU and others are a whole lot better than SEMO. While it's too early to criticize Bender too harshly, it's also too early to coronate him. Yes, we're only one game in, but the reviews in the offseason were inflated when compared to his performance against SEMO. Just my opinion."

"Throughout the second half, Bender added a touchdown throw to Ben Johnson ..."

So Bender added touchdown throws to Ben Johnson over and over in the second half??? I mean "throughout???" From a "professional" journalist??? Seriously, Bobby???

As far as the game, I would have liked to come up with my own opinion, but thanks to the internet "connection" from ESPN, I gave up about 20 minutes in and didn't try again until the 4th quarter, when I got to watch garbage time. Garbage time didn't look very impressive, but I won't form my opinion of the team based on that.

I look forward to watching next week's game, when hopefully the Fox TV feed won't screw us like the ESPN internet feed did.

I agree with all the posters. No running game is a real concern, especially against a team the caliber of SEMO. Four other things I found really concerning:

1) Up by 22 with 5 minutes left, who the heck made the decision to throw the long ball that got intercepted in the end zone? 2) Bender stares down his receivers. Can't do that against a decent team. 3) The SEMO QB missed one wide open receiver that should have been a touchdown. There were at least two other SEMO drops that could have gone for touchdowns that turned out to be drive killers. Plus If SEMO dropped twor interceptions. We could have easily lost this game. 4) The game lasted 3 hours and 40 minutes. No wonder people leave in the 3rd quarter.

On a positive note, after sitting through the entire ordeal, I didn't have to fight much traffic on the drive back to KC.