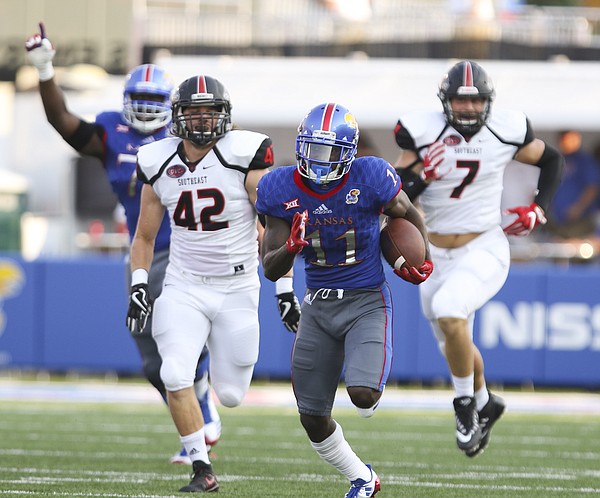 Kansas wide receiver Steven Sims Jr. (11) tears up the sideline on a touchdown run during the first quarter on Saturday, Sept. 2, 2017 at Memorial Stadium. by Nick Krug

The top players and performers from Kansas football's season-opening, 38-16 victory over Southeast Missouri State on Saturday night at Memorial Stadium.

1 – Steven Sims – Set the tone early with his 77-yard touchdown sprint on a routine third-down conversion that gave Kansas a 7-0 lead. Finished with 142 yards and two TDs on four receptions and also proved sure-handed and effective as the Jayhawks’ top punt returner.

2 – Peyton Bender – The first-year QB’s Kansas debut did not disappoint. Despite not knowing he was starting until he ran onto the field, Bender finished 23-of-37 passing for 364 yards and four touchdowns, making quick decisions and flashing his big arm and quality accuracy. It was far from a flawless night, but he threw so many catchable balls and led the Kansas offense with poise.

3 – Joe Dineen Jr. - Back from a right hamstring injury that cost him most of the 2016 season, the junior linebacker picked up right where he left off, finishing with 15 tackles (11 solo and 2.5 for loss) to lead the Kansas defense.

4 – Daniel Wise – His overall numbers were not eye-popping, but his numbers were all over the place. So was Wise, from disrupting things in the backfield to chasing ball carriers down from behind. Wise finished with five tackles (all solo), three tackles for loss and two QB hurries.

5 – Chase Harrell – Most of his contributions came early, but they were big. A fourth-down catch kept one KU drive alive and his highlight-reel touchdown grab gave the Jayhawks a 14-0 lead. Hauled in two catches for 17 yards and added a heck of a hit on special teams, as well.

6 – Dorance Armstrong – Double-teamed and chipped most of the night, the Big 12’s preseason defensive player of the year still found a way to get close to SEMO QB Jesse Hosket, breathing on him for three quarterback hurries and adding three tackles, two solo, and 0.5 for loss.

7 – Ben Johnson – Take away the 57-yard touchdown catch in which he slipped down the seam and was left wide open for the Jayhawks’ easiest touchdown of the night, and Johnson still had a productive opening night to his final season in a KU uniform. Add it to his two other catches and you’re looking at a productive night.

8 – Hasan Defense – The aptly named KU cornerback picked up five tackles and two pass break-ups while bringing energy and emotion to the KU secondary throughout the night.

9 – Dom Williams – Flashed some burst and quickness that could be huge for the KU running game this season. Scored Kansas’ only rushing touchdown of the night on a 10-yard scamper up the middle early in the third quarter. Finished with

10 – Shakial Taylor – Like his newcomer counterpart on the other side, Taylor had a couple of memorable hits, two tackles and two pass break-ups while keeping Hosket from getting comfortable all night.

Defense and Taylor each had nice moments for our secondary. It makes me feel a little better about all the losses from last year's team. And Dom Williams could be our starting tailback by the time the season ends. I'm excited about his future as a Jayhawk.