Put her in the history books.

Lokedi’s win, which came in 20:00.5, helped the KU women finish sixth at the team meet, and the KU men finished seventh.

Lokedi, a junior from Eldoret, Kenya, is the first Big 12 woman to repeat as champion since Sally Kipyego of Texas Tech, who won three straight titles from 2006-08. She also became the ninth Kansas cross country runner and first woman to win multiple conference titles, with Benson Chesang being the last to do so in 2004 and 2005. 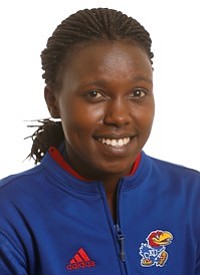 "I'm happy," Lokedi said after the meet. "It's not easy, but you keep working and have to keep believing in yourself and trusting you can do it. I kept telling myself, 'Sharon, keep going, you've got it. Just relax and trust in yourself. Believe you can do it.'"

Iowa State won the women's race, repeating as team champions and winning their sixth title in seven years. The surprise of the day was in the men's race, where the Cyclones took the team title as well, snapping Oklahoma State's nine-year title run.

The Kansas men finished ahead of Oklahoma and TCU in the team standings.

Next up, Kansas will compete at the NCAA Midwest Regional Championship, hosted by Big 12 Champions Iowa State in Ames, Iowa on Nov. 10.

Congratulations, and good luck with districts and nationals next month.