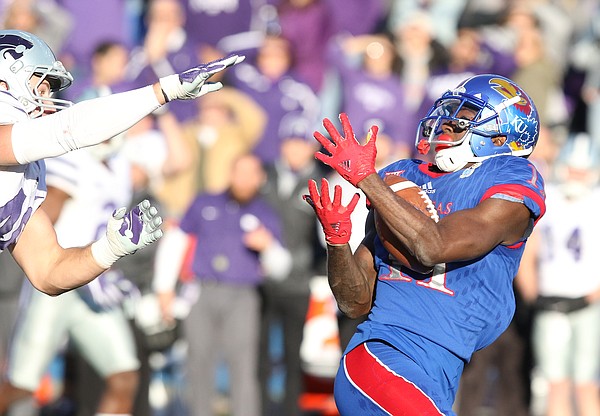 1 - Steven Sims: Had a career day, which is saying something because the junior has had a terrific career. Nine catches for 233 yards and a touchdown. Made circus catch on sideline when tightly covered and managed to land in-bounds after twisting his upper body to catch under-thrown ball. Also turned screen pass into a huge gain and made over the shoulder catch on perfect pass for 60-yard TD.

2 - Carter Stanley: Extended plays with his feet and made some nice throws on the run, two features Peyton Bender doesn’t bring to the offense. In his first start of the season, Stanley completed 23 of 48 passes for 418 yards. He badly overthrew a number of targets on deep balls, but threw a perfect long ball that Steven Sims caught in stride for a 60-yard touchdown. Stanley’s hand injury made him unavailable to throw in the first four weeks of the season. He showed enough Saturday to leave the impression he’ll be the starter the rest of the season.

3 - Daniel Wise: Extremely active up front, Wise spent a lot of time in the backfield, where he was credited with 2.5 tackles for loss, one of them a 7-yard sack.

4 - Mesa Ribordy: Kansas totaled 127 yards in offense and didn’t score a point in the two full games he missed. He returned at center and the offense came with him, totaling 482 yards. He has the potential to develop into a tackle before his KU career is over.

5 - Mike Lee: Made a huge fourth-down stop for one of his seven solo tackles, two behind the line.

6 - Joe Dineen: Eight solo tackles, one assist and 1.5 tackles for loss made Dineen a loud presence.

7 - Bryce Torneden: Four solo tackles, one for a loss for the emerging sophomore who has taken well to the nickel back position.

10 - Keyshaun Simmons: Helped to minimize loss of Dorance Armstrong to injury that kept Armstrong sidelined for more than half the game. Had a 10-yard sack.