What becomes of the Jayhawks’ postseason run this season remains to be seen, but here are 13 reasons why KU fans should be optimistic about their team’s chances this March. 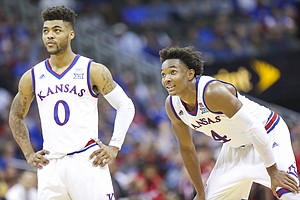 1 - Guards win in March — Analysts, coaches and fans alike will tell you that the key to winning big in the NCAA Tournament starts with having talented guards a team can trust. Few programs, if any, are set up better than Kansas in that department entering this year’s tournament, where leading scorers Frank Mason III, Devonte’ Graham and Josh Jackson will look to lead the Jayhawks back to the Final Four.

2 - Gotta have that dude and Kansas may have 3 of them — Speaking of those three players, many past NCAA Tournament champions have had that one guy who can take over a game or get a tough shot when his team needs it most. In Mason, Graham and Jackson, Kansas seems to have a trio of capable heroes.

3 - Sweet 16 and Elite Eight in Kansas City, Mo. — Location is a big factor in the tournament and Kansas could not have asked for a better draw than to have the Sweet 16 and Elite Eight of this year’s Midwest Regional in their own backyard at Sprint Center in Kansas City, Mo. The Jayhawks have to get there first for it to be a true advantage, but, if they do, playing in front of a heavy pro-KU crowd in a familiar building could be huge. 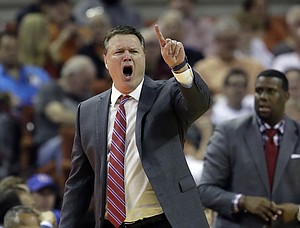 5 - Bill Self — Whether you’re talking about his one trip at Tulsa, his one trip at Illinois or the six times he’s done it at Kansas, Self, in 22 previous seasons as a head coach, has led his team to the Elite Eight or beyond eight times. Beyond that, Self’s willingness to adjust on the fly, inspire toughness, emphasize team defense and balanced offense puts Kansas in great shape to make a run year after year.

6 - Three is worth more than two — With KU’s new-look, four-guard lineup producing a team that ranks in the Top 10 nationally in 3-point percentage, the Jayhawks have found a way to put up points in bunches on a limited number of shots and can spread the outside shooting love around to five different players. 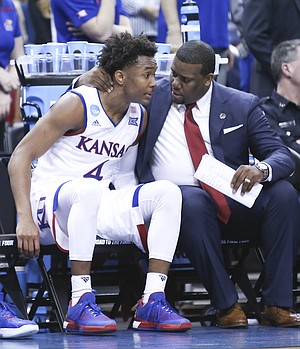 7 - Major motivation — For the trio of Jayhawks who lead this year’s team — Mason, Graham and Lucas — the loss to Villanova in last year’s Elite Eight has served as motivation throughout the offseason and well into the Jayhawks terrific 2016-17 regular season. None of those guys have forgotten the feeling of coming up just short a year ago and all of the work they’ve put in this year has been with an eye on making up for that disappointment.

8 - Jayhawks know how to win close games — Ten times during the regular season, the Jayhawks played games decided by six points or fewer and came out on top. For many of the reasons mentioned above — good guards, veteran leaders, clutch performers — the Jayhawks have had a knack for winning the close ones all season.

9 - Deficits won’t scare them — Trailing by eight points or more 12 times during the regular season, the Jayhawks finished 11-1 in those games, including a 7-0 mark after December 29 in games in which they trailed by double figures yet still won.

10 - Team defense still improving — It’s no secret that this team has not been up to the usual Bill Self standards on the defensive side of the ball. But “at game point,” as Self likes to say, they’ve turned their defense up a notch to ensure victory. A clear sign that the Jayhawks are still improving on the defensive end, if they can take that mentality into the do-or-die portion of their season, these Jayhawks definitely can make a run.

11 - Battle tested by Big 12 — It’s been a long time since the Jayhawks had a night off. From the start of conference play back in late December all the way through the Big 12 tournament in Kansas City, Mo., the Jayhawks have received the best possible shot from a conference ranked by many as the best in the nation, top to bottom. 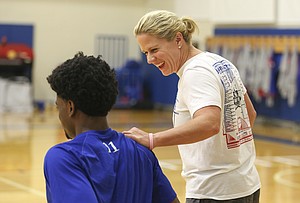 Trainer Andrea Hudy jokes with freshman Josh Jackson as the players get stretched out prior to the start of Boot Camp in the practice gym on Friday, Sept. 23, 2016 just after 6 a.m.

12 - Andrea Hudy — KU’s assistant athletic director for sports performance, Hudy works with the most cutting-edge equipment and knows how to keep the Jayhawks fresh, rested and rejuvenated throughout the season so their bodies are ready for the grind of March Madness.

13 - Vegas, baby! — Kansas enters this year’s tournament as one of the favorites to cut down the nets in Arizona in early April. Las Vegas odds have no bearing on how the games actually turn out, but oddsmakers are so good at their craft that they rarely miss. If Vegas likes the Jayhawks, that's a good sign for KU’s chances.

Rock Chalk chant will be heard throughout the nation. I know our team will have JimmyV or whatever that'll make them focus to not give up. Don't ever give up. Remember:

Mason, you failed to carry us past Villa last year. You'd better do it this year!!

Concern when they get to KC. Cant play from behind against good teams in March. Everyone plays at a different level. Cant shoot 60% from the free throw line otherwise its hack a hawk or hack everyone but Graham and mason Cant take out of control 3's overtime down Graham and Svi. Have to play defense Svi which means stop being late to the play. Be prepared to play some zone as it always gets teams out of sync. Keep Bragg on the bench as much as possible as he is far more of a liability than an asset. Get Vick to play in control at both ends. Hawks have a great shot to make it to the final 4 if they do what they know how to do

Other than that, very enjoyable read, Matt, thanks!

Good points, Eric, and I'd add one more:

In item # 4, I would not list Josh as one of the players having experience. You could say that with his maturity, he plays like someone who has experience, but you can't include him with those who actually DO have experience.

Thanks, Eric. Been cranking out a ton of copy lately and this one slipped by me. I think I just forgot to add last year's Elite Eight to the total. It's fixed now. Glad you enjoyed the rest!

"Concern when they get to KC" ...........hmmmmmm.....Didn't I see Oklahoma State a bit further down the bracket?? Stillwater is a few wagon-greasin's down the road from Tulsa......the screaming fans in Tulsa will not be all the Allen Fieldhouse gang..........hmmmmmm..Concern?? I guess so.

Maybe you should look and see that Okie St. is playing Michigan in Indy in the 1st round. Doubt OSU fans show up in Tulsa.

Did somebody mention Oklahoma State? Heh. They will get curb-stomped early.

Vegas likes them because of where the betting money is right now. Their only interest is in not creating a large disparity among bettors. They don't want to absorb a "blood bath."

That being said, I like KU's draw because there isn't any team in the Midwest that I fear. There are many good teams and potential pitfalls, but "fear", nah, and I am sure that Coach Self and the players feel the same way. They are willing to take on all comers.

By the way, that Michigan-Okie State game ought to be a doozy if OSU shows up to play better than they did against ISU in the Big 12 tournament.

I don't get why the tournament people put conference teams against the same conference in a region, why??? Every bracket should have an even distribution so all are represented. We are a second game away from a possible Miami, Michigan State game, that is not a good seed it is a trap game. Then Iowa State after possibly, there is no benefit to being a No. 1 seed except the first game. Can we beat Iowa State in KC, not sure and a potential huge embarrassment? This is Landen and 1 bench members tournament to win or lose, Svi, someone step up! Our regulars won't get us there, we need someone to step up!

Dammit, Matt. Thirteen is an unlucky number. Couldn't you have made it twelve or fourteen??

Everybody is talking about the Sprint Center as if it was the Garden of Basketball Eden. Am I the only one who sees a huge roadblock potentially ending that dream in Sparty and Tom Izzo???? Our tourney record against those guys ain't great!

The past hasn't been great against MSU, but I don't think this year's Sparty is in the same class as those other teams. I'd be more worried about Miami this year.

Do you think maybe the "13" is tied to the Big12 Championship streak? Maybe?

And one big reason KU may not cut down the nets is depth in the middle. The NCAA are about matchups and ultimately KU will meet a team with big men that will lead to foul trouble for Jackson and Lucas. KU has allowed season highs on many occasions for the other team's bigs and Bragg has proven to be a poor backup for Lucas. Here is hoping Coleby is ready to go.