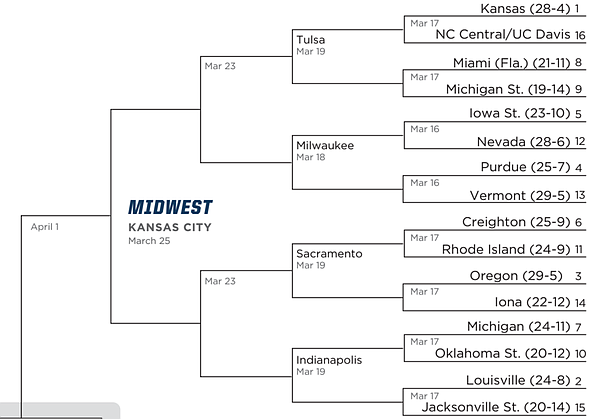 Midwest Region in the 2017 NCAA Tournament by Matt Tait

Sunday was a busy night, tracking down as much information as possible about not one but two potential first-round opponents for the Kansas men’s basketball team in this year’s NCAA Tournament and recapping the thoughts and emotions conveyed to the media by KU coach Bill Self and senior forward Landen Lucas.

Because of that, I haven’t had much time to study the full bracket yet — and I rarely do these days, which merely means that I’m a guy you want in your bracket pool and, in related news, I’ve found myself entering fewer and fewer of them each year.

But I have taken a fairly good look at the Midwest region, where Kansas enters as the No. 1 seed and will look to win two games in Tulsa, Okla., before returning to Kansas City, Mo., for two more and a chance to win a trip to this year’s Final Four.

The following are a few of my initial thoughts on the region along with a quick glance at each team in 20 words or less.

Hard to believe the time has arrived. But it’s here. Merry Madness, everybody.

• First up, good for the committee for not overreacting to KU’s loss to TCU and making things harder than they had to be. The Jayhawks were one of the nation’s best and most consistent teams all season and to punish them for losing a meaningless game which they played without their most talented player would have been brutally wrong. They didn’t. KU got the seed and region it both earned and deserved and now it’s up to the Jayhawks to make it pay off.

• Now, as for the regional as a whole, I think KU fans should be pleased with how this one worked out. Sure, Purdue and Louisville loom as tough challenges in the Sweet 16 and Elite Eight, but the way I’ve always looked at these things is by looking at the 1 through 4 seeds in each region and trying to decide how Kansas fared in a relative sense. In this case, I think the Jayhawks were hooked up. And it’s about time, too. It seems as if Kansas has faced a few brutal brackets in recent years and this one looks like payback for that. Louisville, though tough and talented, is a much better 2 seed to draw than Arizona, Duke or Kentucky, all three of which are red hot and just won conference tournaments. After that, Oregon, with a recent tough-break injury to one of its top players, looks like a much better 3 to draw than offensive juggernaut UCLA, ACC-tested Florida State or even Baylor. And Purdue as the 4 might actually be a better match-up for Kansas than ultra-athletic Florida, Press Virginia or even Butler. The bottom line is this: They’re all tough. Every team has speed bumps on its road to glory. But, when you look at it in a relative sense, I think Kansas got a nice draw.

• Speaking of Kansas’ draw, I will admit that the potential Sweet 16 showdown with Big 12 rival Iowa State was an eye-opener for me, as well. But fear not, KU fans. If the two teams advance that far, it would be Kansas that enters that game with extra motivation, both aiming to avenge a home loss that ended a 50-plus game home-court winning streak and desiring to end the claims from Iowa State fans that Sprint Center is Hilton South. It would be a tough game. And I think Monte Morris is capable of getting the Cyclones to compete with anybody. But if I’m Kansas, I’d take it — a team you know well that you’re facing with a huge chip on your shoulder. I hope we get to see it.

• Tom Izzo be damned. It seems to me that if you’re a Kansas fan, the best move you could make in Round 1 (not that it matters) is to root for Michigan State to knock off Miami, Fla., in the 8-9 game. The irony here is that it seemed fairly obvious to me last year that KU wanted Miami to knock off Villanova in the Sweet 16 in Louisville and now Jayhawk fans are staring at a scenario where they should be hoping for someone else to knock off the Hurricanes. Izzo’s team struggled with turnovers all season and dropped 14 games against a Big Ten schedule. Eight of those came in Big Ten play and a ninth came against Northeastern. The rest of the MSU losses are legit, but still... FOURTEEN LOSSES?!?!? Miami, meanwhile, played 11 games against Top 5 seeds in this year’s field, winning 3 and dropping 8. The ‘Canes are athletic and physical and also coached hard by Jim Larranaga. Both teams are tougher opponents than anybody would want to see in Round 2, but if you’re trying to pick the better match-up for Kansas, it’s Go Sparty all the way.

• Sleeper rankings in the Midwest region: 1. (5) Iowa State. 2. (11) Rhode Island. 3. (13) Vermont. If Iowa State were in any other bracket and facing a different looking road, I’d probably pick them to go pretty far. (I’m always a damn Big 12 homer with my bracket, though, so take that for what it’s worth). Still, the Cyclones have talent, they have an absolute stud leading them and they’re hot right now. As for Rhode Island, I’ll always take a team that likes to play defense and few do that as well as the Rams. Not the most consistently sound team throughout the season, but if URI can get its offense going, that D could win them a couple of games. And then there’s Vermont. Wouldn’t it be funny if, after all of this talk about KU facing Iowa State or Purdue in the Sweet 16, it’s actually the Catamounts who are sitting there waiting? Vermont plays solid D and attacks the paint on offense, which could spell trouble for Purdue’s bigs and Iowa State’s depth. It’s a long shot, but, isn’t that why they call it Madness?

17 teams in the Midwest region in 20 words or less.

1 – Kansas: Recent loss was a wake-up call and the Jayhawks are driven and focused. Playing in KC certainly wouldn’t hurt.

2 – Louisville: Cards emphasize defense and do it with length. Six of top eight players are 6-7 or taller.

3 – Oregon: Guard Dillon Brooks is as fiery and emotional as any player in the tournament. He’s got game, too.

6 – Creighton: Few teams will be as dependent on the rims and arena as the Bluejays. If they’re not hitting, they’re done.

7 – Michigan: They’ll either make a run or run out of gas. I’m going with the latter.

8 – Miami, Fla.: Tied for 7th in ACC despite wins over Carolina, Duke and Virginia. Scoring 70-plus will beat them.

9 – Michigan State: Sparty regularly goes 10 deep and does it without much drop-off. There’s good and bad in that.

10 – Oklahoma State: They were red hot a couple weeks ago. Can they rekindle the flame against white-hot Wolverines?

11 – Rhode Island: Defensive style and tenacity could make life miserable for any number of opponents.

13 – Vermont: We’re going streaking! Catamounts have won 21 straight games and haven’t lost since before Christmas at No. 13 Butler.

14 – Iona: Sneaky super-upset pick. Won’t be afraid to run or score with the Ducks. Can they rebound and defend, though?

15 – Jacksonville State: It’s not good when your best wins are vs. Belmont and at Tulsa & you’re playing in your first tourney.

16a – NC Central: To quote Jimi Hendrix, “Are you experienced?” Eagles start five seniors and play seven in top eight of their rotation.

Agreed that Kansas seems to have finally been placed in a bracket that feels fair. I don't know if I'd call it favorable, but it seems no worse of a draw than any of the other one seeds received.

On the whole, with the obvious exception of Wichita State seeded 10th, I think the committee did a pretty good job of seeding teams.

I think the committee did a great job with this year's tournament selection ie WSU, Syracuse, KSU, WF ect. This field is loaded with good teams and once again should make for awesome games!

I can't wait to watch the 'hawks... Frank and Josh should lead us on a special run to Phoenix!