Kansas middle blocker Tayler Soucie (10) and Kansas right side hitter Kelsie Payne (8) celebrate a point during the fifth set on Saturday, Oct. 29, 2016 at the Horejsi Center.

Asked outside of the team bus about the impact of No. 2 Texas’ five-set loss to No. 6 Kansas Saturday night at Horejsi Family Athletics Center, UT coach Jerritt Elliott had nothing but positive things to say about the team he is now tied with atop the Big 12 standings.

“We need this in our conference,” said Elliott about another top-tier program with which to compete for a title. “Our conference is getting better but, for us to grow and develop, we need teams that are at this level to be able to play at a high level.”

The Longhorns, who have been to seven of the last eight Final Fours on the national stage, also have won five consecutive Big 12 titles. In order to make that six in a row, they now will have to keep one eye on their six remaining opponents and one eye on the results out of Kansas. Not that that’s anything new, really. 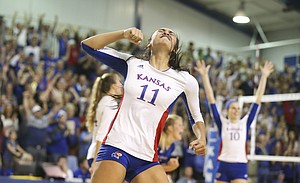 For the past few seasons, Elliott and his players have watched the Jayhawks (20-2 overall, 9-1 Big 12) reach new heights, and Elliott said he often has talked to his team about the value of as many regular season challenges as possible.

“It’s good that Kansas is getting there,” he said. “It’s needed. It helps us. You’ve gotta be put in these situations to be emotionally be able to handle it. We’ve got a lot of respect for each other and they deserved to win. We weren’t as consistent as we should’ve been.”

The fact that the Jayhawks finally broke through after 25 consecutive losses to the Longhorns — Texas (17-3, 9-1) also now leads the overall series 40-5 — brought equal parts relief and euphoria for the KU players and coaches. But KU coach Ray Bechard said it was important that the Jayhawks emerge from Saturday’s huge victory with their minds focused on their other goals — winning a Big 12 title and returning to the Final Four.

Still, Bechard said he’d be lying if he didn’t acknowledge what a huge moment Saturday night was for his program. And he shared that message with Elliott after the match.

“They’ve set a great standard that we’re all trying to chase down,” Bechard said. “That’s what I told him on the floor. We’ve been looking up at them in the standings for a long, long time and that team made us better tonight. Hopefully other teams feel the same way about us.”

As recently as last Wednesday night, following a 3-0 Kansas sweep at Texas Tech, Bechard received a similar compliment. Saturday night, Elliott was the one willing to dish it out.

“We’re not gonna get more stressed than we were tonight in terms of environment,” he said. “And that’s a tribute to some of the pressure Kansas put on us.”

Classy comments by both coaches. I'll also bet that, when the day comes that KU's streak of conference championships in men's basketball comes to an end, Bill Self will be as complimentary of the team that breaks KU's streak.

I agree with you 100% about the 'Streak', Harlan! Coach Self is a "Class Act", and I would expect nothing less from him, the totally great sportsmanship! So in about 10 years, we will see if we are right! ha ha ha ha ha ha ha

Great article, Matt Tait! I truly enjoy reading your articles, and also watching you on talk shows! You are a very sharp individual, down to Earth, and level headed! Thanks so much!