Head coach David Beaty and the Kansas University football team close their spring game by singing the KU Alma Mater. Beaty inherits a squad woefully short of numbers and one that is looking for walk-ons to fill the gaps.

For years, Jayhawker Towers has been synonymous with the on-campus home away from home for Kansas University athletes.

But that soon will change.

KU athletic director Sheahon Zenger confirmed to the Journal-World Monday evening something that KU recruits have been hearing about for the past several weeks — there are new living quarters coming and they're going to be spectacular.

“This is really a profound moment for the University of Kansas and Kansas Athletics,” Zenger told the Journal-World. “And it is a great indicator of the relationship between the university and athletics, especially KU Student Housing and Diana Robertson, the director.”

The new apartment complex, which may have room for as many as 750 beds, is the all-sport follow-up to the state-of-the-art McCarthy Hall dorm that houses the men's basketball team and a handful of traditional students. Like McCarthy Hall, the new facility, which will funded entirely by the university, will house far more than just athletes.

KU has roughly 220-250 scholarship athletes during any given year and that will leave room for roughly 500 traditional students to fill the new apartments, which will sit somewhere southwest of Allen Fieldhouse. 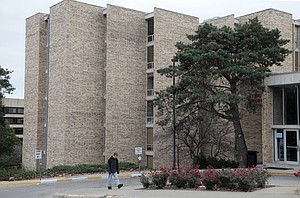 Because of the demand for on-campus housing, Zenger said Jayhawker Towers would remain standing and become a housing complex primarily used by traditional students.

The new apartment complex, which has yet to receive a name or final price tag, recently made it through the final step in a series of approvals.

KU is hopeful that the apartments will be finished sometime in 2017. In the meantime, the promise of what Zenger said would be a facility that is second-to-none, will continue to be a tool used by KU's coaches in recruiting across all sports.

Some have said the a key to recruiting success (beyond W's) is to get a stadium remodel. This would seem to indicate that it's not the first priority. I'm guessing that's coming from talks with players, recruits and coaches. Is this also supposed to be the replacement for McCollum or are they doing something with that site?

McCollum has already been replaced and in its place sits a parking lot. The new building sits where parking was for Hashinger Hall I am not sure what it's call. Soon the campus path will cut to the south side of where McCollum was and a glass bridge connecting to west campus will be built. KU is expanding and the campus is looking beautiful.

There's actually 2 new dorms on Daisy Hill this year. Oswald and Self (not affiliated with Bill) Halls replaced McCollum. I also don't think McCollum is a parking lot yet and probably won't be until next school year because it takes awhile to remove that much debris and weather is iffy at best to do any paving in Kansas this time of year.

This is a helluva lot cheaper than a renovated or new football stadium, so not really comparable, except that this will be a nice recruiting tool to pitch.

Wonder what will come of the Towers?

From the article above....

"Because of the demand for on-campus housing, Zenger said Jayhawker Towers would remain standing and become a housing complex primarily used by traditional students."

I've been a big proponent of building a stadium. But having read this article, I think I understand something I didnt before. To build a program, you have to value the players first. No it wasn't that way with the basketball team, but our BB players' accommodations never lagged years upon years behind comparable programs. A stadium takes care of the fans. A dorm takes care of the players. I feel like Kansas is putting the horse in front of the cart as they should by erecting a new set of dorms. It also says to other athletes--apart from football--that they are valued here. That's got to be key in recruiting across all sports. The more I think of it the more it dawns on me that the dorm is the right project to tackle at the moment. And as far as football is concerned, it'll be nice to know that the table is clear of all other projects so we can give our undivided attention into a new stadium facility. The goal at that point should be to make Kansas' stadium the pride of the Big 12. Unparalleled among other conference schools. As is Allen.

Joe I totally agree. I think we as fans have been so caught up in our gameday experiences and consequently believed that upgrading the stadium would drive an improved product on the field, so much so that we overlooked the living situation and how that might impact a recruit's decision in choosing a school. As you said putting the horse before the cart in this instance is not a bad thing as improved living situations will help lure top talent which should ultimately allow us to improve the stadium after the wins start to come. I've discussed this separately, but Memorial should ultimately be lowered, moved toward the bowl for more noise, and the outside should be covered in limestone to match the rest of the theme on campus. minor improvements, huge impact on the look and feel of the stadium for games.

What makes me most pleased with all of this is that Zenger is going to use this as an opportunity to improve all SA's living envrionment (besides MBB) and not just the football team. This sort of investment serves as a message to the rest of the coaches that their programs are valued and important to the school, and will be a great recruiting tool that should help all programs.

BA, Joe actually suggested this is putting the horse in front of the cart. Meaning this is the right way to go. Details, details.......And I'm in full agreement with both of you. That said, the stadium can't be too much further down the road or other things will suffer like fan support which helps pay for a lot of this.

sorry about that, mixed up my idiom there. you're right!

KU has already upgraded the training facilities. By upgrading the housing, the university becomes more attractive to the athletes, which in turn should bring about more competitive teams. It seems like a natural progression.

This is great news for student athletes as well as traditional students. I graduated from KU back in the 1990s and the student housing (dorms) was very dated back then. Glad to see KU is modernizing their facilities to keep pace with their growth and to be be more attractive to prospective students/athletes.

My only question is whether or not some transportation system will provide a ride for the football players from their dorm to the practice fields. It's a long walk from Allen to Memorial.

They usually drive over there anyway, since there's plenty of parking at the complex and they have meetings before practices...

These guys are D1 athletes, if that walk impacts their ability to practice or play effectively, they probably shouldn't D1 athletes.

It's called building a foundation for success. Maybe if KU had a better foundation then, the program wouldn't have fallen off a cliff like it did. P R I O R I T I E S.

I still think all Division I basketball and football programs should be run as Auxiliary Enterprise entities. Just another student employment opportunity. Buzz off NCAA. Bring on the scholarships from the Pro teams. Bah! Humbug. Oh yes, these semipro jobs should come with prepaid lifetime medical insurance, at least for brain and spinal cord injuries. Now you are expected to risk lifetime inujury with self paid insurance for the Old Alma Mater.