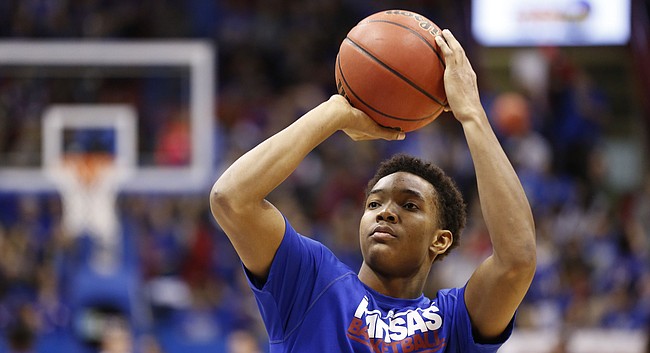 Kansas University freshman point guard Devonté Graham gets some shots up Saturday, Jan. 31, 2015, at Allen Fieldhouse, prior to the Jayhawks' Sunflower Showdown with Kansas State.

Down a returning point guard just more than a week before his team leaves the country for the World University Games, Kansas University basketball coach Bill Self finds himself scrambling, in search of a replacement.

In May, Self added SMU senior point guard Nic Moore to the Jayhawks’ roster for the South Korea trip, and figured his 12-player team was all set.

“We’re gonna add somebody. We’ve got to,” KU’s coach said Friday afternoon, before the 12th annual Bill Self/Lawrence Parks and Recreation Department Golf Classic, at Eagle Bend Golf Course. “I think we’ll have it sorted out, hopefully by tomorrow for sure.”

“We’ve just got to get enough guys healthy to go on the trip, because we’re beat up right now,” Self said, alluding also to injured Brannen Greene, recovering from hip surgery and unavailable. “And then we’ve messed around and recruited enough international players (Ukraine’s Svi Mykhailiuk and Mali’s Cheick Diallo) that they’re not eligible. So we need a little help.”

As a result, Self and his staff have spent the past couple days hunting for Graham’s replacement.

“All we do is just call coaches and ask if they’ve got their best player that’s a guard, that’s not in summer school and has a passport and doesn’t have anything to do the next 23 days and has no plans,” Self joked of the criteria for the late addition.

“It’s OK to call somebody on short notice and say, ‘Hey, let’s go do something.’ But we’re not going to dinner,” the coach said of the difficulty involved. “It’s a little bit hard to do when you have a long commitment like that.”

As for Graham, Self said medical staff expect the second-year point guard from Raleigh, North Carolina, to recover in four to six weeks, then start rehabbing his knee for a full return.

“It’s pretty significant,” Self said. “He’s out for the summer more than likely.”

Conner Frankamp knows the system and Ron Baker or Fred Van Vleet likely have a good idea of the system living in Kansas and going to KU games like they did. Those would be my first 3 contacts, Frankamp if you want a plug-in piece that knows what you run, Baker if you want a hard match up for most teams, or Van Vleet if you want a solid PG to replace Graham.

Any of those would be a great addition, but I doubt Marshall would go along with this. If he did, my respect for him would increase a lot...

? You're telling me that you wouldn't take a player that already knows the system a week before you start playing or one of the two current winningest players in college basketball right now that also have knowledge of the system they'd be playing in and have been repeatedly described as one of the best backcourts in college. You can't tell me that circumstances given they wouldn't provide a quality addition and be easier to fit into the style of play than most other candidants. I think they could all help us win which is all I'm worried about... I don't know... Maybe wanting to find the best pieces so USA and our players that get to go have the best chance of winning gold is a bad mentality for me to have :-/ (if Coach Self got a UK or Mizzou player I'd still be good with it if he thought it would help us win)

It's not an issue of quality players and knowing the system. It's the political animosity from little brother that will likely keep it from happening.

WSU players played with KU players at the 2012 KU Barnstorming Tour in Wichita and the world didn't end than... People seem to want to make it a bigger issue than what it really is, both coaches have even said good things about one another on multiple occasions. http://i62.tinypic.com/f1wrw7.jpg

Baker and Van Vleet are trying out for the Pan Am games while the WUG tournament is going on so they are out of the question.

I'm with Bert. Great idea. It would increase the interest and create some unique dynamics. I imagine it might be more difficult and a bit awkward with Conner, and maybe even more so with his dad. But Ron Baker or Van Fleet? That would be fun and interesting, and the tickets in KC might just be a bit harder to come by, coupled with increased eastbound traffic on the Turnpike. Might hurt KU pride slightly seeing a lot of yellow shirts in the Sprint Center in the mix with those of Crimson and Blue. I can hear Marshall now saying, "no problem, Bill. Baker and Van Fleet for the home and home over then next 4 years. Second thought, maybe it won't happen after all.

BMac is in town and would make a great addition though I imagine there might be contract restrictions on where he can and can't play. Also might not have a passport, though there should still be time to get that on a rush app - or is that 30 days.

Players under NBA contract are not eligible for this tournament because of the NBA's CBA.